Task :The Battery Life of the Redmi Note 3 – My Experience

What’s up guys! I am back with my new post. Whoo. And this time it’s something about the Redmi Note 3’s part. Which actually helps this baby to come alive. Yeah. It’s obvious right? The battery. I am going to give an intro on the battery.

So, this Redmi Note 3 actually has a mind blowing 4000/4050 mAh battery in it. Yeah. I know. For a such thin device, with a really good display and goodness packed in it. That battery capacity is a dream come true. Haha. In case you guys didn’t know, the battery is in fact thinner than our typical Redmi Note 2 Battery, as shown in the Redmi Note 3 launch which was held in India sometime earlier. Here’s the picture of the Battery in Redmi Note 3 comparing with the Redmi Note 2. But take note, Redmi Note 3 does not have a removable back. So, yeap. To me, I don’t really worry much about the unibody design because I love these design. Unibody design is sexy.

Okay. So, I have been using this phone for a week now. And I should have told you how long the battery lasts and so on… Which I didn’t. Cuz I wanted to test the phone battery under my Day – to – day life situation. And that’s the main reason why I even started testing and using the redmi Note 3 as my daily Driver.

This is my Experience and Opinion on the Battery Life of Redmi Note 3.

Starting off the day:
So, I started off my day and unplugged my phone from the charger at 6:45am today, (22nd March). Here’s the routine stuff I do in the morning. Once I remove it from the charger, I normally pair it with my bluetooth speakers and listen to some songs while packing my stuff to University and text to all the people who tried to reach me while I was enjoying myself at dreamland during the night. And around 7:21 am, I had around 95%. Here’s the reason why, As the phone was just utilizing the bluetooth and it was on standby. It didn’t use much. So yea. And As I was using my GPS to navigate to my place, the battery was reduced to 91 %.

And at 7:30 ish, left home. And reached my Uni at 7:45 am. And that’s when the real game started. I was in my class, doing my assignments and stuff. Mostly googling for facts, referring to my notes and stuff. Oh! And listening to music in the background. I was using my Cellular Data and not the WiFi. I did this from 8 till 9. Battery Dropped from 90 % to 80 %. And from 9 – 10, the phone was actually in standby. So, I barely lost more than 2 – 3 % of battery.

After that, I had a long break. From 11 – 12, I was watching an hour episode on my Phone and the Battery percentage after watching the episode was around 70 %. As I was done with my series. I plugged in my headphone jack and was jamming some music, searching info in google and socializing as well. Yeap.

At 2pm, I had 55 % Battery left. Later at 3pm ish, I was actually using my phone. Well, more like playing games. Not for long but just for few minutes. I played Riptide GP2 and Leo’s Fortune. As my class got over, I left home and used the GPS. After all the gaming and GPS stuff, I had 40 % battery left. and it was already 3:30.

So, after reaching my home. I hit back the road with my dad to grab something. And was back to More socializing & music. It was paired to the car’s bluetooth. Snapped some pictures, made some calls, transferring files and stuff. after all the stuff I did outside. I reached home around 7:00 pm.

I remember having around 15 % battery left. So what I did was trying to use up the 15% battery. And the phone turned zero percent. Exactly at 7:45pm.

In short, The phone actually lasted for 12hrs or more. And the screen on time was about 6 hours ++. Here are the screenshots as a proof. 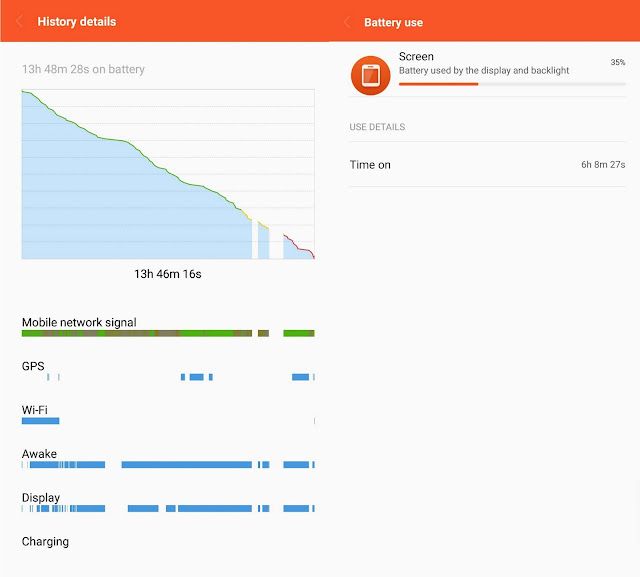 With some intense Internet browsing, Socializing, watching series, jamming to some tune, using the GPS / Bluetooth and so on. I didn’t really had to worry about carrying a powerbank anymore. Because even after throwing this phone into my daily routine. It passed with flying colors. And No doubt. This phone can go for 2 days with very light use.

My personal favorite about this phone is actually the standby time. It’s splendid. With no background process, On DND Mode and no data / WiFi connection, this phone never lost more than 3 – 4 % battery, throughout the night. With a complete charge.

Thanks for letting me share my opinion.
And oh. Stay tuned tomorrow.
Because My full review will be up real soon.

Till then.
This is Prithivi / Vesper,
Signing off. 🙂