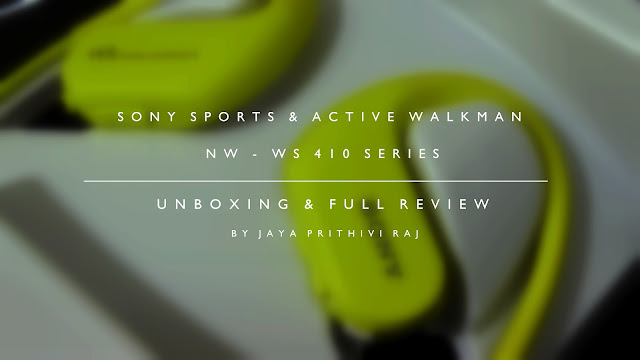 Recently, Sony released it’s all new Walkman Waterproof and Dustproof NW-WS410 Series. And it comes in two variants, which is based on the storage. In case you guys didn’t know, Sony has this Sports and Active Walkman series for those who is into working out, even swimming too. And I had my eyes on this one for quite some time. As a huge fan of their older Sports Walkman, because of it’s really impressive feature in it. And they finally released in Malaysia few weeks back and guess what, I got my hands on one. So, let’s not waste any time and get right into it. 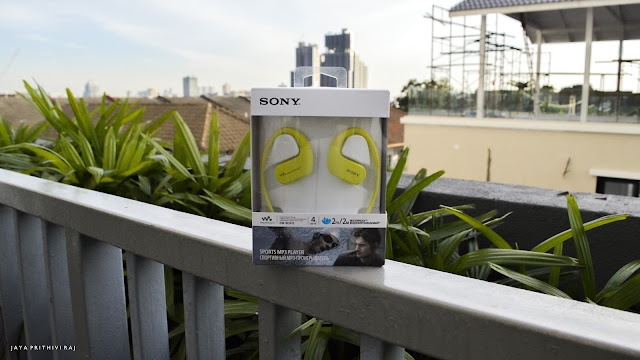 Before we open up, let’s look at what’s around the package. On the front, we have the Sony logo along side with all the interesting specs. And we see the walkman just right there under that transparent plastic. The color I got is Lime Green. It’s not just different, but also it gives that funky vibe. Very cool. One of my favorite color. The variant I got is with 4GB of Internal Capacity. Not the biggest capacity in the world, but it does get the job done. It’s waterproof up to 2M depth for 30 minutes. Not just in swimming pool. But also in salt water too. Totally awesome. 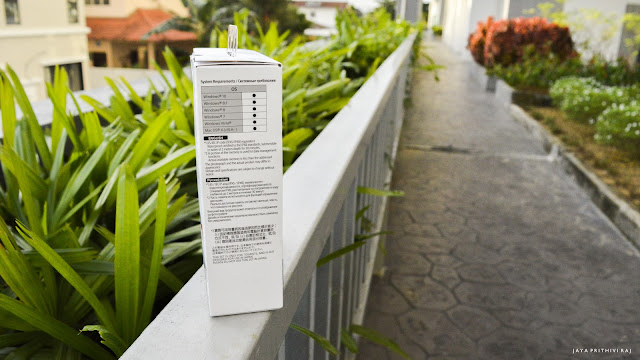 On the left side, we see the requirements. Like which OS it supports and all. And some extra information, including this one.

“THIS SET IS ONLY FOR TOURISTS, AND IS NOT DESIGNED FOR USE IN JAPAN. PLEASE DO NOT USE THIS SET IN JAPAN.” 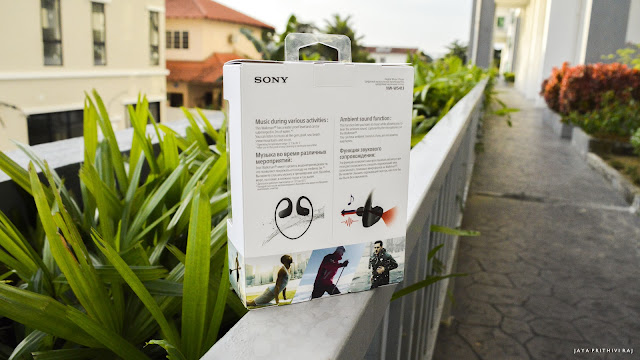 Anyways, on the back of the box we have more information. Here’s some of the interesting specifications about this Walkman. As I told you earlier, this is a waterproof and dustproof certified device. Another thing is you can use this walkman, anywhere because it can operate in temperatures between -5 to 45 degree Celcius.

And another feature, Ambient sound function. This feature helps you listen to music while allowing us to hear the ambient sound captured by the microphones on the Walkman. It’s like going to the mall, listening to the song playing on those speakers and hearing that screaming child standing beside you. 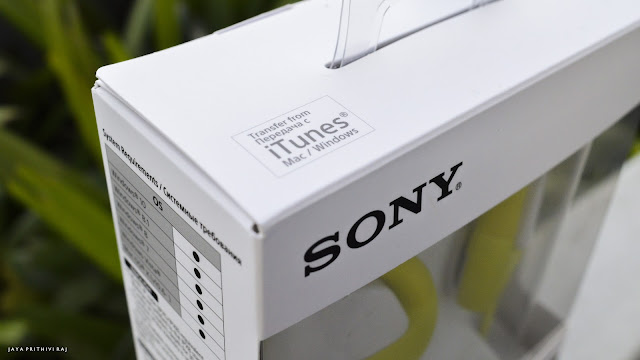 One more thing to note, is you can transfer from iTunes. Not sure how that works, but well It’s good to know. 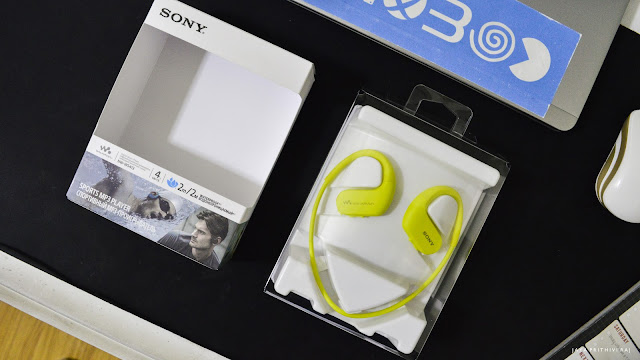 Now, let’s see what’s inside the box. As you open the box, you will see the Walkman covered in a thin plastic sheet. Once you remove that, you can take off the Walkman. Behind, as you open up the flap you will see a number of accessories. 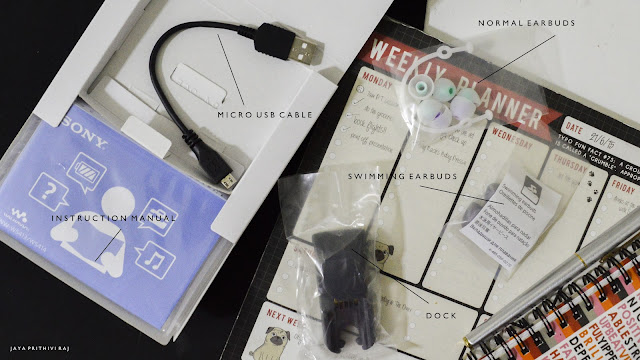 Normal Eartips (White color) and a tip specially made for Swimming (Black color), A charging / sync Micro USB Cable, charging / sync dock for the Walkman and finally some paper work. That’s all. 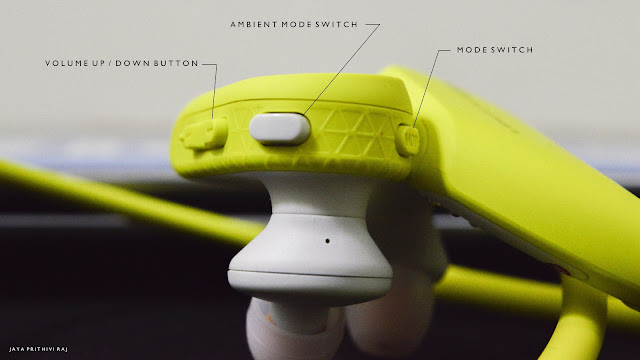 On the Walkman, we have various buttons. The left earpiece, has three buttons too. On the top, is the Mode button. This is for you to either listen to songs in sequence, shuffle or repeat one, followed by that white button which is the Ambient sound function and the Volume up/down button. 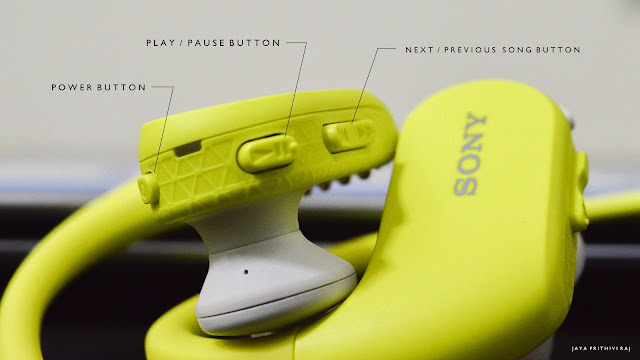 So on the right earpiece, we have the following. The power button, Play/Pause Button, Next/Previous track button, LED indicator and that small dot. That’s the microphone, which you can see in both. 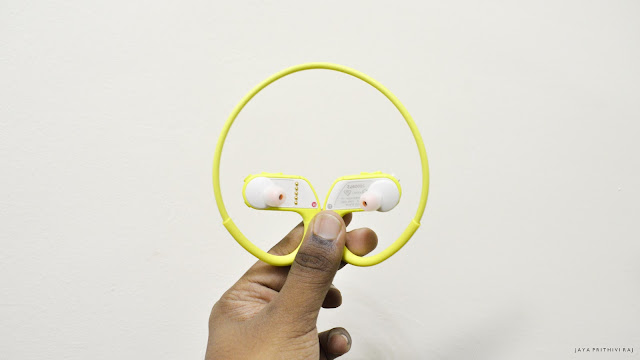 I have been using this for like a week now at most. Since the day I got it. I will be listing out the pros and cons finally. But I will be going one by one.
When using it for the first time, it’s not easy to get used with the button. But in a day or two, you’ll get the hold of it. Build quality: Nicely crafted, but feels a bit fragile. As long you don’t flex until it deforms then it should be alright. The finishing of the Walkman is very smooth and the matte finish is neat. Simple and straight to the point.
Buttons are clicky and tactile. Small additions does improve a lot like there’s a textured dot on certain buttons, like the power button and the volume up button. Easy identification. One press and it works. Responsiveness on point.
On to the earpiece. It is designed in a way that it will not fall from your ear. Literally. Fits nicely. But using for more than 2 hours or so, might give some sort of discomfort (Depends according to people).
The sound quality. For a very compact sized Walkman, it gives a really good quality sound. Well, of course don’t expect any Hi-Res stuff over here. I like the fact that I don’t have to convert any of my m4a. files to mp3., which is a great thing. m4a. files gives you a better indulging experience compared to mp3. So, you still have a really good time with your music by adoring to every detail of the song. And it has minimal amount of bass. Well, it’s very minimal. But still okay.
And now on to Ambient sound function. It works like exactly what they said. Very good microphones. Catches the voice of the person talking beside you crisp and clear. Will come in handy when you want to listen to some music and to your personal trainer, while working out.
I didn’t test it during swimming, yet. Once I do it, I’ll just post a quick update on how it functions.

There’s is this cool, voice in this Walkman. As soon as you, wear it in your ears, and turn it on. There’s some voice which says “Power On”, “Playing by folder” and “On” for ambient mode… So on… Inclusion of this allows you to know what you’re clicking. 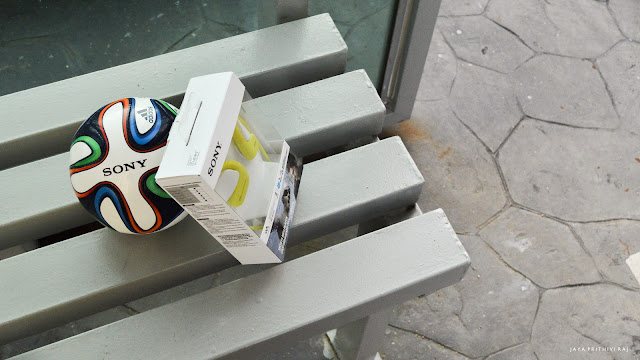 How about others? Well, If you are looking for a Walkman player which has a built in earpiece, an internal storage and don’t have to deal with wires or something. It’s a good choice to consider.

One thing you have to be really careful is do not flex until it deforms or do anything ridiculous which can break the Walkman. This Walkman doesn’t come cheap. I have to say, It’s worth spending money on.

In terms of availability, Sony Malaysia is selling for RM 399 for the 4GB Variant. But there’s no price on 8GB. And you can get it from their Online Store or drop by to the nearest Sony Centre / Sony Store to grab a pair for you or for your friends as a present. I’ll drop the link below for you guys to check it out!

Again, Huge thanks to Sony Malaysia. And as always, Thanks to all for reading this Unboxing and Full Review. I will catch you guys with my next blog post real soon.

This is Prithivi Raj / Vesper
Signing off!