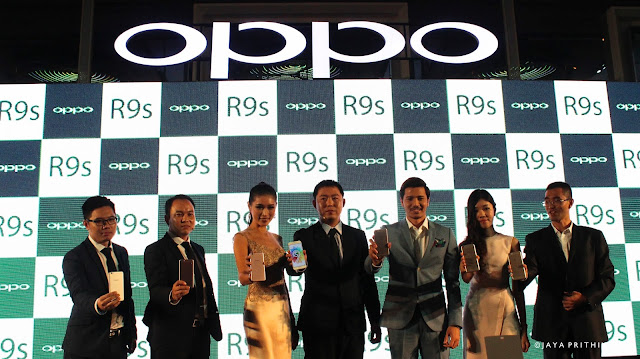 Hey folks. Oppo, a smartphone company that we are no strangers to, released their all new R9s, which comes under the R Series here in Malaysia on Thursday. And also it was unveiled by some of the popular celebrities in Asia like Lee Min Ho, a popular Korean star and Min Chen, who is also a popular chinese star. We also had some of our very own Malaysian stars, like the famous model Amber Chia and others like Fattah Amin and Ayda Jabat.

Now, let’s take a quick look around the specification of the Oppo R9s itself.

This time they concentrated on the rear facing camera and they teamed up with Sony, one of the leading manufacturers of Image Sensor and developed a new sensor with Oppo. The Sony IMX398 Sensor has a whooping f/1.7 and the size of the sensor is 1/2.8 inch. What this sensor does is that it captures 40% of the light and will also allow the sensor to give an amazing performance under low light and many more. It also has a dual PDAF system that shoots crisp photos everywhere, anytime.

In terms of Performance, it rocks a Qualcomm Snapdragon 625, clocked in at 2.0 GHz (Octa-Core) and a whooping 4GB of RAM & 64GB of Internal Storage. It also has a fingerprint sensor on the front that let’s you unlock your device in just 0.2s. And finally, it has a 3010 mAh that can get you through the day.
In terms of design, they made a “six-string” antenna line that does not only works as an antenna but aesthetically, it is visually appealing. Well, the phone itself feels ridiculously thin. And it does feel solid in hand. It also gives that premium feel because it uses a metal closure and the curved 2.5D Gorilla Glass on the display gives that amazing view of the screen.

Speaking of the price, the R9s will be available for Pre-Order starting from Thursday, 5th January for a price of RM 1798. That’s a very attractive price for a device like this. And you can get it from the online store and also at retail outlets.

That’s been it guys. Thank you so much for reading and I’ll catch you guys in the next article.