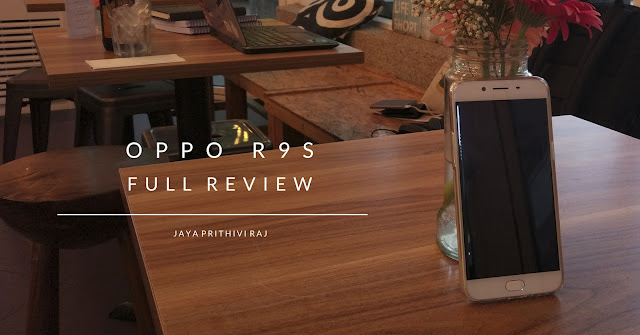 Three weeks ago, I unboxed the Oppo R9s and gave you my first impression. If you haven’t check that out, you can watch the video or read about it, in the links that located down below. After a while, I finally had a great time using the Oppo R9s as my daily driver. R9s is one of the device that was released earlier this month (January), by Oppo. It has a lot of great stuff that’s packed under the hood and I got to try it. And this is the Full Detailed Review on the Oppo R9s. 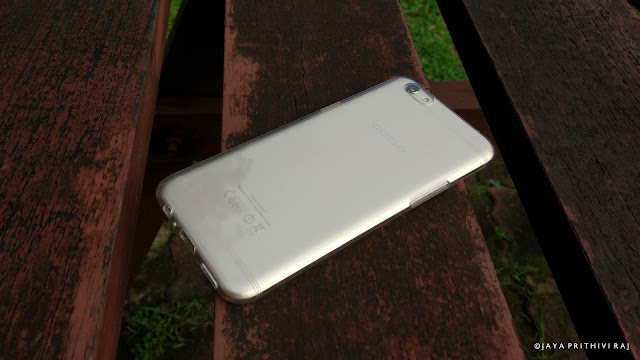 In terms of design, this phone has a curved aluminium backing and the on the front we have this 2.5D Corning Gorilla Glass. These makes the phone feel premium and nice to hold. And the weight of the phone, isn’t distributed evenly. It’s heavier on the bottom than the top. Next up is how thin is this phone. It’s super thin, measures around 6.58mm. I am amazed by how thin this phone is. But with a phone this thin, I had problems holding it in one hand because I was scared that the phone might slip off my hands. So, the case that’s included with the device comes in handy.
Overall, the phone feels premium and it doesn’t feel cheap, thanks to the materials used to craft this phone. The Micro USB, Speaker and the headphone jack is located at the bottom and there’s no problem in connecting both micro USB and the headphone cable at the same time.
Display 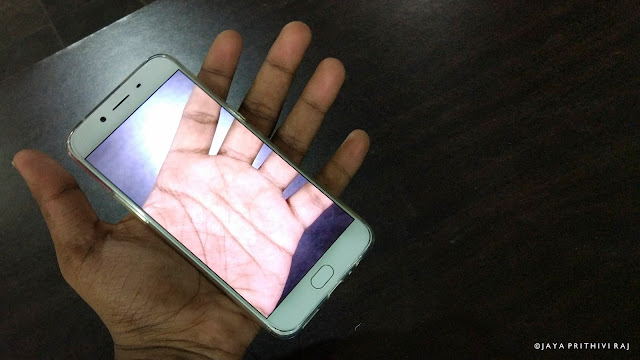 This phone rocks a 5.5” FHD Display on the front. It has 401 ppi. It gives a rich color tone that is vibrant and colorful. It does support features like Eye Protection where it filters out the blue light, and lets you have a good viewing experience at night. The brightness level on this device is good indoors but I had troubles using it outdoor, as it wasn’t that bright. Often, I found myself looking for a shade to use this device. Whereas at night, it was the opposite. Even the lowest brightness, was bright. I ended up getting irritated at times and it was pretty annoying.
Under daily usage, watching movies, series or even videos is pretty enjoyable, thanks for the vibrant display. The viewing angle is pretty good but the color gets shifted at the most extreme angle, which is normal for every device.
But other than that, it’s a pretty beautiful display. If only, the brightness could go a bit lower and higher at certain situation, it would have been one of the nicest display I’ve seen in a 5.5” device. And I also wish it had more natural tone rather having a colder tone.
Performance
When it comes to performance, this device rocks a Qualcomm Snapdragon 625, Octa Core processor clocked in at 2.0 GHz. And not only that, it has a whooping 4GB of RAM for a smoother multitasking experience.
For those who are really into the Benchmark scores, you can check out the scores below. But do take note, BenchMark scores and the real life test varies.

If you don’t know, I actually used this phone as my daily driver. And here’s what I can say about this device. It handled normal tasks perfectly well and thanks to the 4 Gigs of RAM, multitasking was a breeze. Switching between apps was easy and I got back to the part where I left. One thing that’s odd is that once in a blue moon, the device tends to glitch when multitasking after clearing the RAM and I have to turn off and turn the device back on.
The phone didn’t get heated up when I multitask or when I run a game that has a high graphics performance, like Republique for instance. And also, certain apps tend to glitch a lot. For instance, when ever I tap the record button on Instagram Stories, it tend to hang and then boom … it crashes. I had the similar issue with Snapchat, even after clearing every single app from the memory and just using Snapchat gave me a problem. Too much lag. But it’s just one or two application, that gave me a hard time.
The phone handled every single game very well. It was smooth and there was no drops in frame rates.
Overall, the performance was not bad because of the 4GB RAM. And I am pretty sure that if it had like 2GB, this phone wouldn’t survive.
Camera
The main highlight of this device is the cameras. But mainly the rear facing camera. The rear facing camera has a new image sensor that was co-engineered with Sony, specially for Oppo. It’s a Sony IMX398 Sensor, that has 16MP with an aperture of f/1.7. Which means it allows more light than usual. And also, has this dual PDAF that allows you to take even better images.
And guess what, it did. Every single shot that was taken using the R9s looked pretty good. Here’s some shots that you can take a look at.

The colors were true to life but there are times it looks super saturated. The greens were too green. And so on. This camera has some extra tricks up its sleeves too. Like you can make your very own GIFs, has a filter mode where you get tons of filter to use, Double exposure, Ultra HD and Expert Mode which is the Manual Mode.
One sad thing about this camera is that it does not have a OIS or even EIS. For a huge device without either of these, is kind of a bummer. But all you need is a steady hand. I like shooting pictures on the move and most of the time, I either get a blurred out shot or a defocused shot.
Moving to the front, we have a 16MP camera as well, but this time it’s a f/2.0. I don’t take a lot of selfies normally, but I just had to do it with this phone. And the first thing I noticed is that, it’s obviously detailed and the pictures that turned out was pretty amazing. Once in a while, it tends to look washed off because of the exposure.
But overall, it’s a really good camera. f/1.7 is something you don’t find in a lot of cameras at this range and it gets the job done. To me, the camera is good and it’s not a complete disappointment.
Battery Life
This phone has a 3010 mAh battery. And under heavy usage, the phone lasts less than a day. The screen on time is around 3-4 hours. And as soon as the phone beeps, I have no choice other than finding the nearest power source and plug it for charging it.
Under light usage, like just listening to music and barely use the internet. The phone lasts for a day. Starting my day at 8 in the morning and it lasts all day till, 9 at night. And under standby, the battery is amazing. It doesn’t lose a lot of percentage over night. Before I hit the bed, I had around 90 percent and when I woke up, I had around 85. Which is pretty good.
Overall, the battery life is decent. I wouldn’t mind if the phone had a higher capacity and if the phone was a bit thick.
Charging
This phone uses Oppo’s charging techology, VOOC Fast Charging. And it’s no joke. Within 30 minutes, I can get around 50-60% battery and I can hit the road. Here’s a time lapse of the device, charging from 0-100. So, you’ll get a rough idea on how fast the charging speed is.

Call Quality & Connectivity
This will vary according to the telco you use. Personally, I had both good and not so good experience. The call quality is great. I was able to hear the person from the other side, clearly and it was sharp. I didn’t face a single drop in calls which is amazing and the person from the other side was able to hear me clearly.
The data connectivity is good. I was using a 4G+ network but there was few odd times, where the phone tends to lose signal on data and then I won’t be able to use it. And I have to restart the device to make sure my data works. I missed so many of my friends messages when this happened. And it was kind of disappointing.
WiFi & Bluetooth Connectivity
This device uses a 802.11 a/b/g/n, and the connectivity was continuous and good, I liked it. It has a Bluetooth v4.0. My bluetooth was always turned on because I keep it connected to my smart wearables, my bluetooth In ear and also in my car. And I didn’t lose my connection due to any interference. It was strong and there wasn’t a single distortion.
Fingerprint
This phone has a front facing fingerprint sensor, located right beside two capacitive buttons. And it’s fast. Ridiculously fast. The sensor recognizes the fingerprint in a snap and its one of the fastest sensor I’ve come across at the moment.

UI & OS
This phone runs ColorOS v.3.0 based on Android Marshmallow, 6.0. The ColorOS has some nifty tricks up its sleeves. Like the security Center that lets you monitor the system for any viruses, clear your cache and so on. And also it’s customizable. You can download any kinds of themes from it’s theme store and also find fonts from Play store.
The notification toggle is kind of annoying because to swipe down, you have to reach all the way to the top. Swiping down at the home screen, enables the search screen where you can search anything and you’ll get your results right away. And I hope there’s a Android N update coming soon.
Conclusion 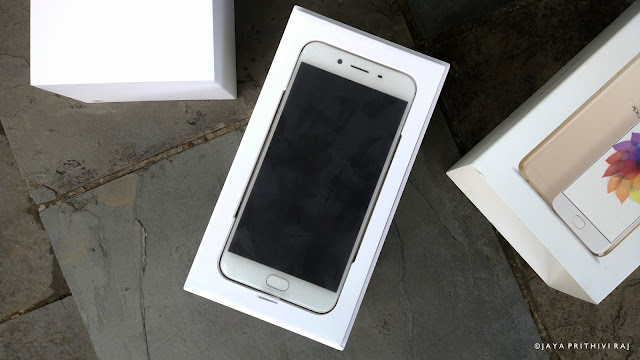 Oppo R9s is a pretty good phone. In terms of design, it looks beautiful, thin and definitely doesn’t feel cheap. On top of those, you get some decent specification, like the 16MP IMX398 sensor, 4GB of RAM, a crisp display and so on. It is indeed a complete package. In terms of software, it does have certain flaws. The resemblance is just too similar to their competitors. And I hope they do something about it in their next update. That’s it.

You can get your very own Oppo R9s, right now at every single authorised store or even head over to their online site like 11Street, Lazada to get your very own at the price of RM 1790.
Again, thank you so much for reading this. It means a lot. And be sure to subscribe to my YouTube channel for more videos and also follow me on my social network, for more tech related stuff.