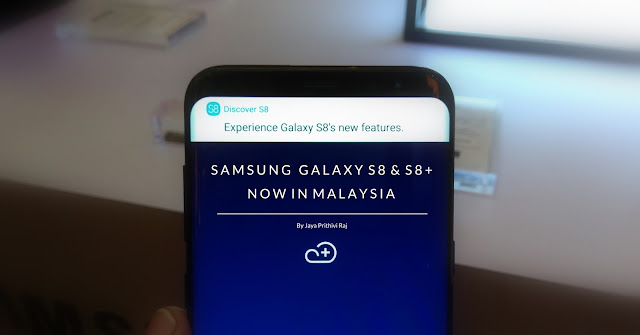 It’s May the 4th and Samsung’s force is strong with their Samsung Galaxy S8 & S8+. It has finally reached the Malaysian shores. The Samsung Galaxy S8 & S8+ is the latest and greatest offering from Samsung and has tons of goodness under the hood. This is the First Look & Impression on the device itself.
Under the hood, both S8 & S8+ sports an octa-core processor with 10 nm process that gives more power, followed by 4GB of RAM and 64GB of Internal Storage. It powers an 12MP OIS Dual Pixel camera with an aperture of f/1.7 on the back and a 8MP AF with an aperture of f/1.7 on the front as well. The only thing different is the clock speed of the processor, dimension, the battery capacity and the display itself. The S8 has a 5.8” QHD+ Infinity Edge display, a 3000 mAh Battery and the S8+ has a bigger 6.2” QHD+ Infinity Edge display and a 3500 mAh Battery.

In the hands, it feels amazing in so many ways. In fact, the device feels so small with such huge display, it is immersive and also beautiful. On the top, have the Iris Scanner, Proximity sensor, Front Facing Camera and also the Speaker Earpiece. On the bottom, we have nothing else but an always on home button which looks beautiful. On the sides, we can find the volume rocker and also the power button. On the top, there’s the headphone Jack and the SIM tray. Moving to the bottom, we have the USB-C port, headphone jack and also the speaker grill. Finally on the back, we have the Camera, Fingerprint sensor, Flash and the HR Monitor.

The Samsung Galaxy S8 & S8+ is going on sale starting from 5th of May for RM3,299 and 3,699 respectively and also there’s a roadshow going on where you can get PWP offers on the Gear VR Headset and Gear 360. Click Here to know more on the Samsung Roadshow

I can’t wait to try the Samsung Galaxy S8, unbox it and give you guys my full review on it. So, stay tuned alright!
Tags #Galaxy S8+