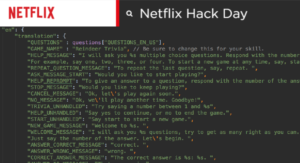 Every single tech heads like graphic designer, software development and others who’s into technology loves hearing the word Hack Day. It goes by many names like Hackathon, hackfest and so on. One of the company who recently had their Hackathon was Netflix, called the Netflix Hack Day, where they celebrate every two years with Netflix’s thinkers and makers. What they do is form a self-selected team, compete with each other and they build all sorts of apps and hacks, starting from the craziest stuff and all the way to some practical stuff. Only thing is that, they need to stick with two rules: The result has to be related to Netflix and it has to be built within 24 hours.
And this year, they had the Netflix Hack Day at their Headquarters in Los Gatos, California. And within 24 hours, they were able to pull off some pretty cool stuff in just a few hours.
The first one is called the Netflix Vending Machine. It’s a vending machine where you can use it to top up your Netflix account with cash in public places. They were asking themselves like “how do they reach customers in markets with low credit card penetration” or “what about customers with limited or no access to broadband internet.” Hence why, the Netflix Vending Machine came into existence. Pretty cool ey?
The second one is called Teleflix. What this team did was, they wired up a Raspberry Pi (pretty sure, you guys know that’s like every single coders soulmate) to a vintage AT&T telegraph key. Now what this does is that it translates an input of Morse Code into USB keyboard scan codes. It’s now aimed to make a remote control with a single button that can be used to search a Netflix Catalog. I am pretty sure this will be the best feature for a lazy person like me. xD
Now this last one, is probably the most simplistic yet creepiest one ever. It’s called the Spookyflix. You remember how our Netflix App Home page looks like right? What this team did was, they added eye movements to the images on Netflix by tracking our remote’s position. I think that’s pretty darn cool.
Right now most of you think, “Why do they do this? And why are they wasting time?”. Well, the annual hack day is a part of Netflix’s ongoing effort to showcase how they come up with creative and innovative things at the company. If you think this is crazy, wait till you hear what they did during the last Netflix Hack Day. They made a version of House of Cards play on the original NES, turned Netflix into an old-school video rental store with the HTC Vive, and re-imagined Narcos as a video game called Plata o Plomo.
Sadly, they might not end up being a part of Netflix feature where we could get to try it out, but I love how this let’s them come up with some mind boggling concepts that is both creative and out of this world.
By the way, technology can be pretty fun too. And this is one way to do it. And Netflix, if you’re reading this, you guys should do an exhibition where we get to try these hack day innovations. 😀
Tags #Netflix Hack Day
Google, Google Drive, News Update, PC

Google Drive is NOT DEAD; Desktop app Killed & Replaced with Backup and Sync

8 Changes with the Samsung Galaxy Note 8!

Netflix Mobile Plan starts at RM 17 but What’s the Catch?

Shop with our Affiliates