Samsung Galaxy S9+ Review: The One with a Change

Not too long ago, we reviewed the Samsung Galaxy S9 – their new smartphone which still shared a lot with its predecessor. We felt that the S9 was more of an incremental update (Click here to read the full review) Along with the Galaxy S9, we had the Samsung Galaxy S9+, the bigger brother with extra added tricks up its sleeves – like a secondary camera, a higher RAM and Internal Storage configuration. But does that make it any better than the S8+? It’s time to find out in this Full Review. 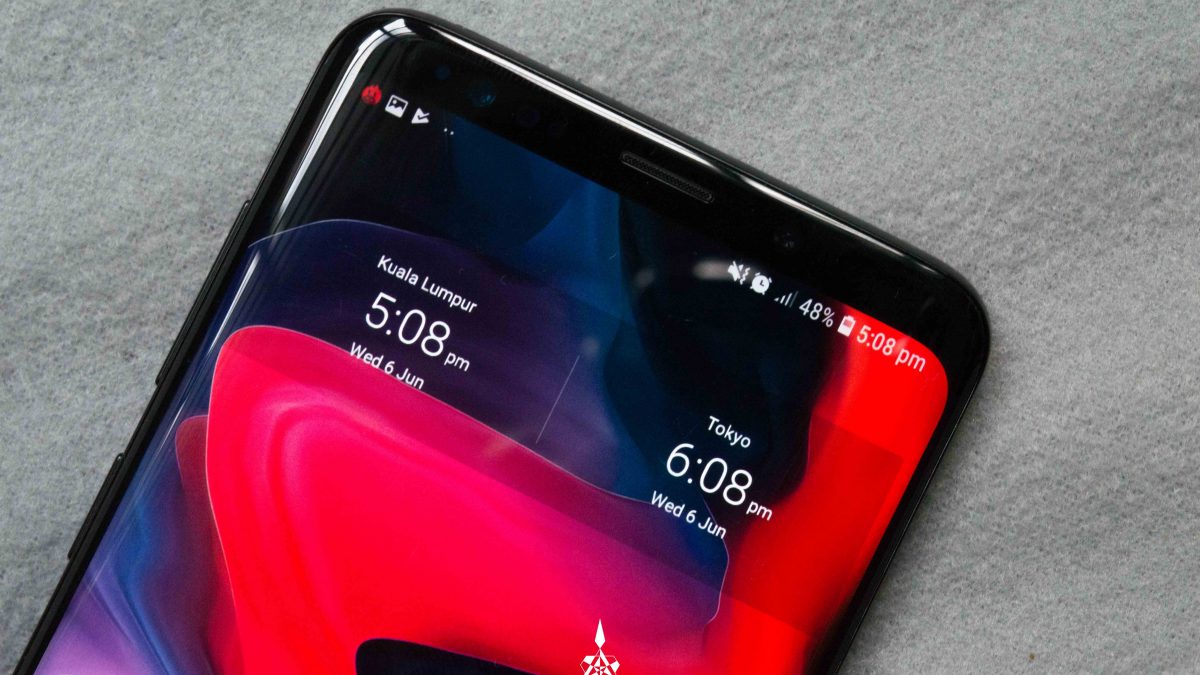 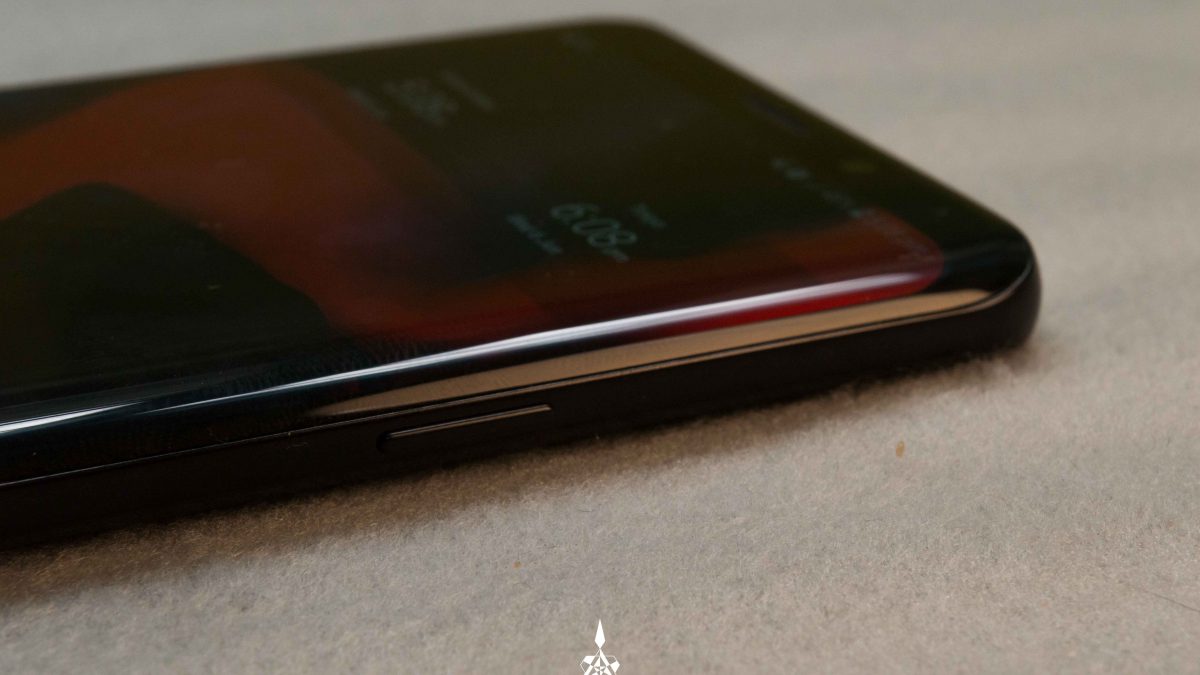 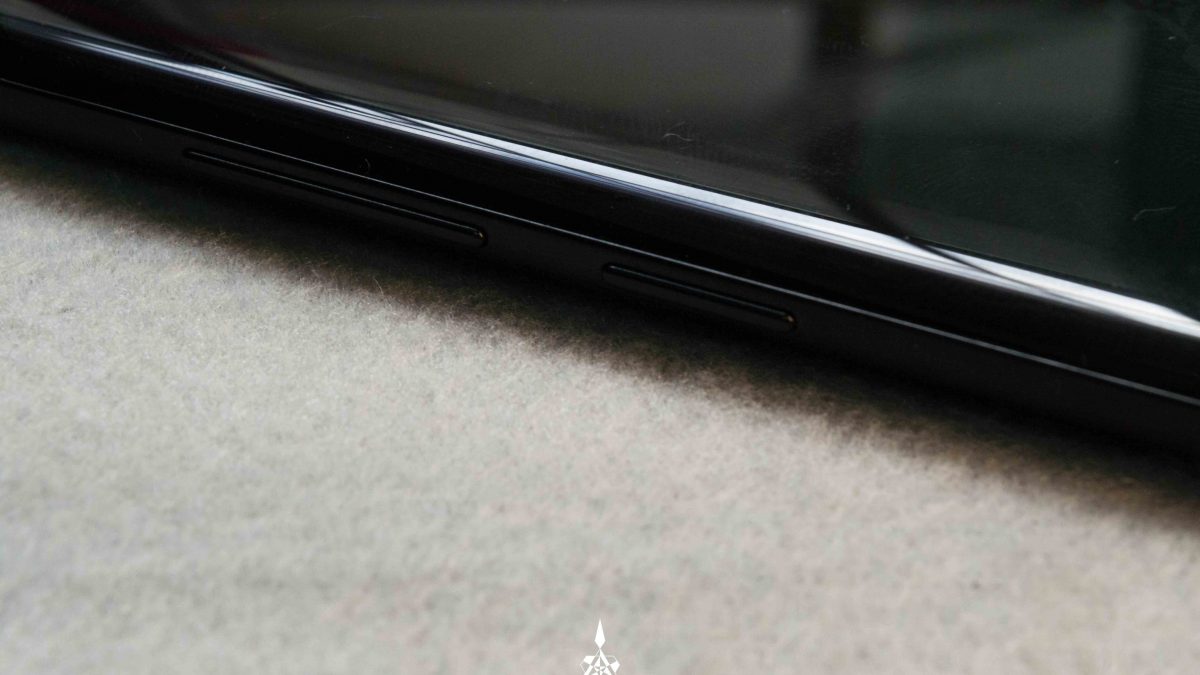 Just like the S8+ we reviewed last year, the Samsung Galaxy S9+ boasts the same design language. It has the usual curved sides with the glass seamlessly sinking into the edges and rounded off edges. On the back, it is covered with glass and you’ll notice a design change. Unlike the previous S8 Series, they’ve repositioned the fingerprint sensor and you’ll notice two cameras instead of one – which we will talk about it later. Other than that, the device is pretty much the same. It’s not a bad thing but it’s very interesting to see from a company that changes design with every single S Series stick with the same design as their predecessor.

The build quality on the S9+ is lovely. It’s covered with glass on both the front and back and metal rails around the sides. It does scream premium with the material that they went with but it’s fragile. I’d suggest grabbing a good Samsung Case on your way out of the Samsung Store while you’re at it. The weight is evenly distributed and the buttons on the device is clicky, tactile and responsive. I have no complains with that.

In US, the Samsung Galaxy S9+ is powered by Qualcomm Snapdragon 845. But that’s not the case in Malaysia. The device sold in the Malaysian market is powered by Samsung’s in-house Processor – Samsung Exynos 9810 which is clocked in at 2.8GHz with a 10nm Architecture. On top of that, the S9+ gets 6GB RAM and three different storage configurations – 64GB, 128GB and 256GB.

Below here, you’ll see the benchmark scores for the Samsung Galaxy S9+. Do take note that these scores do not add up to day-to-day performance as it varies accordingly. 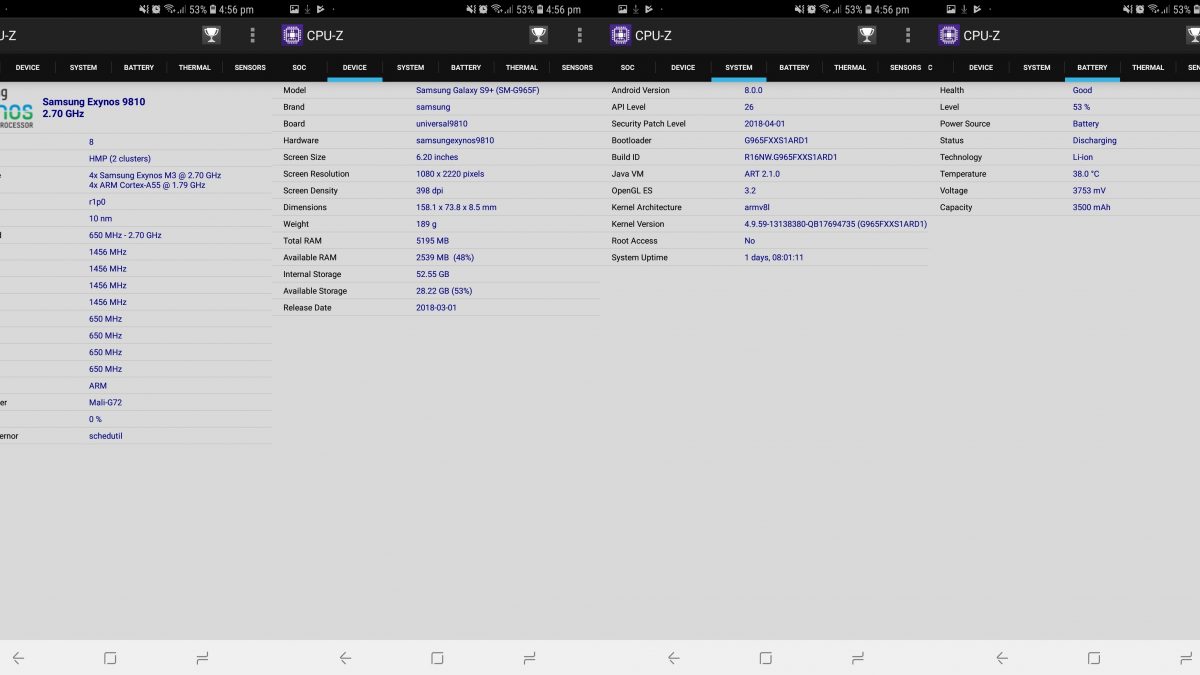 The Samsung Galaxy S9+ packs a 6.2” Quad HD+ Super AMOLED display with a resolution of 2960 x 1440. It also has a pixel count of 529 ppi. The display is also curved at both the left and right side. Good thing – Samsung went for an 18:9 aspect ratio instead of having a notch, although personally I don’t have anything against the notch.

The display is in FHD+ by default and you can toggle it to QHD+ in the settings – just like that. Just like the previous S8+, the colors on the S9+ display pops and brings images and videos to life. Thanks to the support for HDR10, watching videos or even series on Netflix is very pleasing to the eyes – thanks to the true black color production. On the sides, you don’t see any color bleed. Usually curved displays tend to have such issue, but the S9+ didn’t. The color calibration on the S9+ is vivid and it’s calibrated more towards a cooler tone by default.

Overall, it’s a great display and viewing contents on it is amazing. 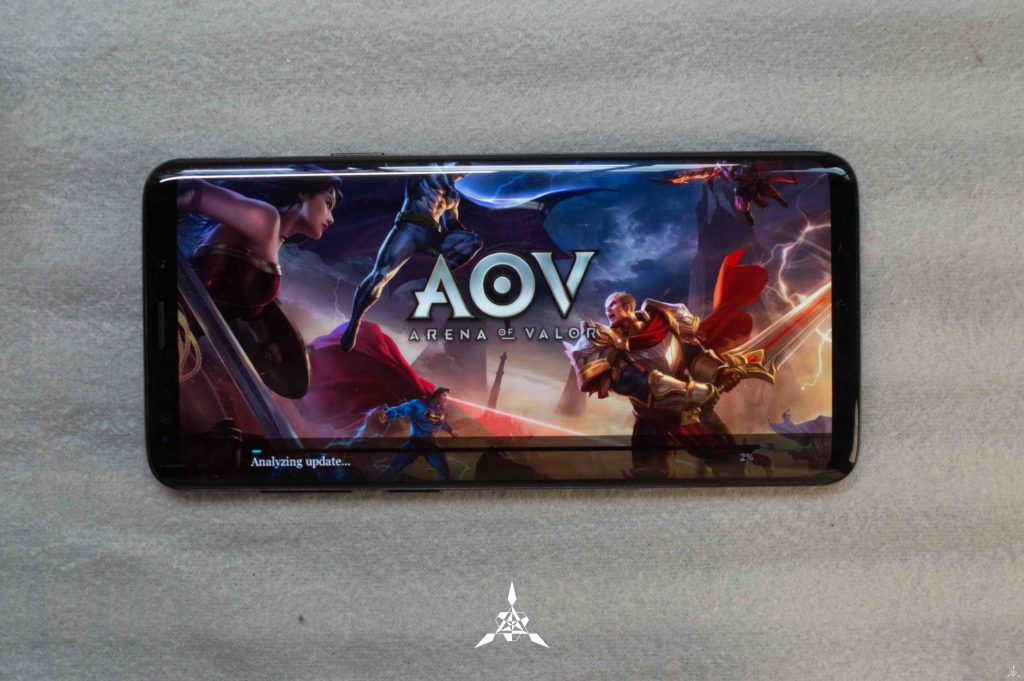 Looking at the specification would have given you a rough idea that the performance on the S9+ isn’t going to wait for anyone because it’s that fast. Thanks to the 6GB RAM, multitasking between apps that tends to take time to load – like Photoshop is a lot quicker and easier. Playing game titles like – Arena of Valor, Tekken, No Limits were very smooth, and the response was quick. The app launches in a matter of second, making it snappy.

Honestly, when it comes to the performance – there’s nothing much to say. Since is a flagship grade smartphone, it’s just as what you’d expect in such phones.

Under the Galaxy S9+, the phone packs a 3500 mAh battery – which is the same capacity as it’s predecessor. I used the Galaxy S9+ as my daily driver, so expect a realistic day-to-day score. I unplugged my phone around 6:30 am in the morning and Under moderate to intense usage, this is what I got. The phone gave me a SoT of 4 Hours 41 Minutes – which includes me using Netflix, browsing, social network and so on. Around 2:36pm – I had about 12% battery. Yes, I ended up plugging into my battery pack to make sure that the phone doesn’t die on me anytime soon.

I wouldn’t say it’s the best battery life experience I’ve encountered so far – but it’s better than the S9. Take note that this battery life was based on the FHD+ Default resolution. If you were to opt in for the QHD+ or HD+ Resolution in the settings, the battery life will change drastically.

We have a special article brewing for the camera and we will take a deep dive into that soon. 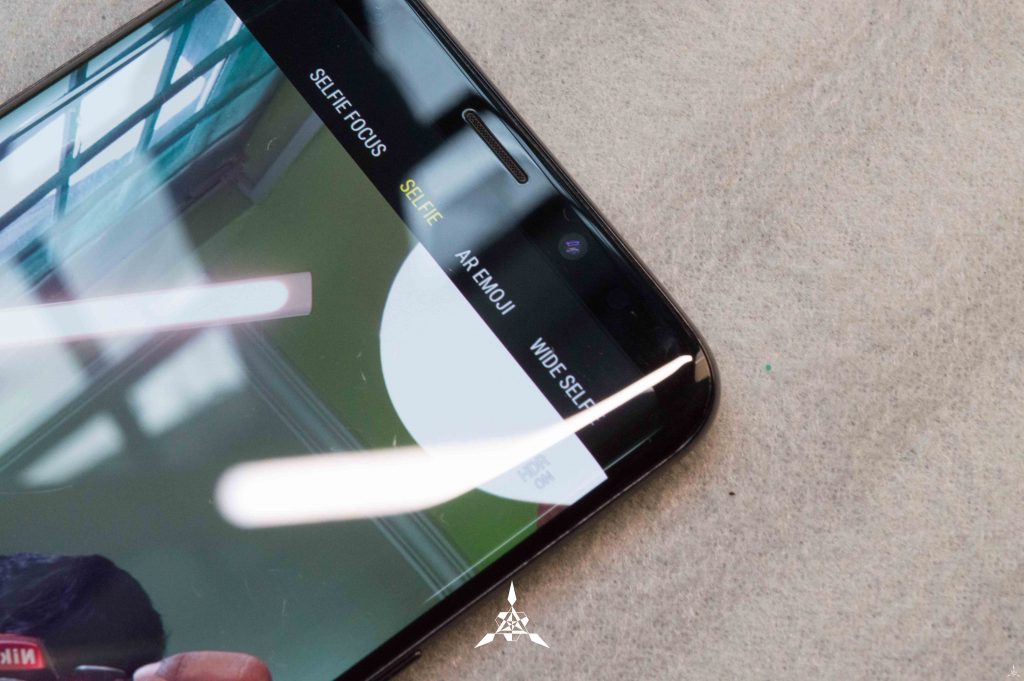 On the front, the Samsung Galaxy S9+ has an 8MP Auto Focus camera with an aperture of f/1.7. Thanks to the Auto Focus capability, it’s easier to get the subject in focus – especially when it’s a group selfie. Other than that, it’s decent and good enough. With the front facing camera, you can create your own AR Emoji – personalizing your emoji and sending it to your friends. As cool as it sounds, the AR Emoji is still a half-baked feature that doesn’t really good job. With my skin tone, it tends to give an inaccurate color and it does not resemble my face in any way.

On the back, you’ll find two cameras on the S9+. Both camera is equipped with a dual 12MP sensor. The primary sensor has a dual aperture – where it can switch between f/1.5 and f/2.4, according to the lighting you’re in. The secondary sensor is a telephoto lens with an aperture of f/2.4. Both sensors have Optical Image Stabilization.

This setup is a huge deal breaker because the things you can do with this – it’s limitless. The primary sensor’s dual aperture setup captures images well under low light and under day light – the pictures are sharp and vibrant enough. The telephoto lens does a good job in taking images that’s further away. The fact that it switches between two different apertures with the primary sensor does help in obtaining a great low light photo. It also supports Super Slow motion where it shoots video at 960fps at 720p – this feature is more of a novelty than something people would use it on a frequent basis. 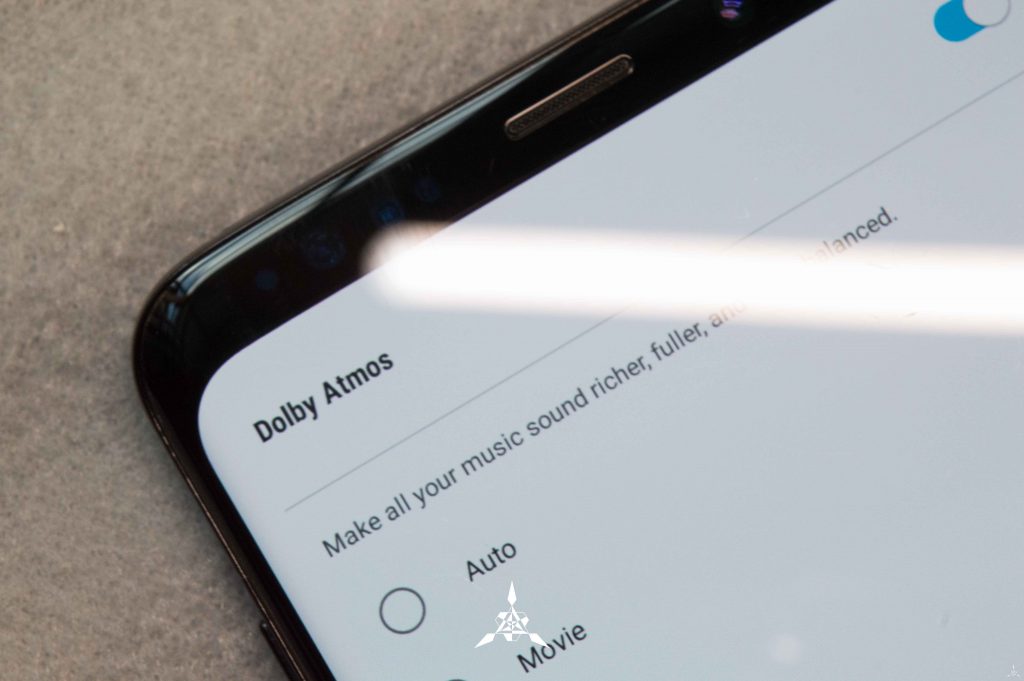 Another upgrade from the previous Galaxy S8 is the audio department. The S9+ finally ditches the mono speaker for a stereo speaker setup. The speaker is still in a downward position and the earpiece acts as a speaker as well, giving it a more immersive listening experience. These speakers support Dolby Atmos. Toggling it on, will allow you to choose from its various type of profiles – for instance Music, Movie and so on.

Overall, it was loud, clear and decent. I wouldn’t say it’s a great speaker on a smartphone but it’s a start – so, kudos for that.

The design and animation of the User Interface is fluidic and amazing to handle. All it takes – is just a bit of learning and once you get the hang of it, you are good to go. I like the current Samsung Experience as it’s a lot cleaner than you think. There’s no lag or sudden crash during my time using it and I personally liked it.

As for those who is very keen about updates – good thing – Samsung Galaxy S9+ supports Project Treble where instead of updating the whole thing, it gets an incremental update patch – which is a huge step coming from Samsung. Only downside is that, even these updates take a bit of time to arrive. For some reason, I only get the May Security Update in June. Samsung must buck up on this one.

There you have it. I used the Samsung Galaxy S9 and I felt that it was more of an incremental update. The Galaxy S9+ on the other hand, it does have some trick up its sleeves and comparing it with its predecessor shows that the S9+ has some significant upgrade over it. But do I recommend it? Yes and No. Now for those who is currently using a Note8, it’s completely pointless to upgrade to the S9+. First things first, it’s not cheap. Secondly, Note8 and the S9+ shares almost the same thing – except for the fact that the S9+ doesn’t have an S Pen.

If you want to upgrade from S8 or S8+, it’s a bit justifiable. But then again, I wouldn’t recommend it either. Now if you’re coming from an older Note or S series smartphone, it’s worth jumping to the S9+ or the S9 – because you get to experience the new UX and also use one of the best in class camera. Don’t forget to have a battery pack with you while you’re at it.