By now, most of you know that the Republic of Gamers branding belongs to ASUS – to give an identity to their gaming series. Last time, we saw their first non-ROG Gaming laptop called the FX Series which was targeted towards affordability and entry gaming capabilities. This series had an identity crisis and now it has got its own lineup – the TUF Gaming Series. We had the chance to play with the new FX505 from Asus and guess what, it’s time for us to share our final verdict in this ASUS TUF Gaming FX505 Review. 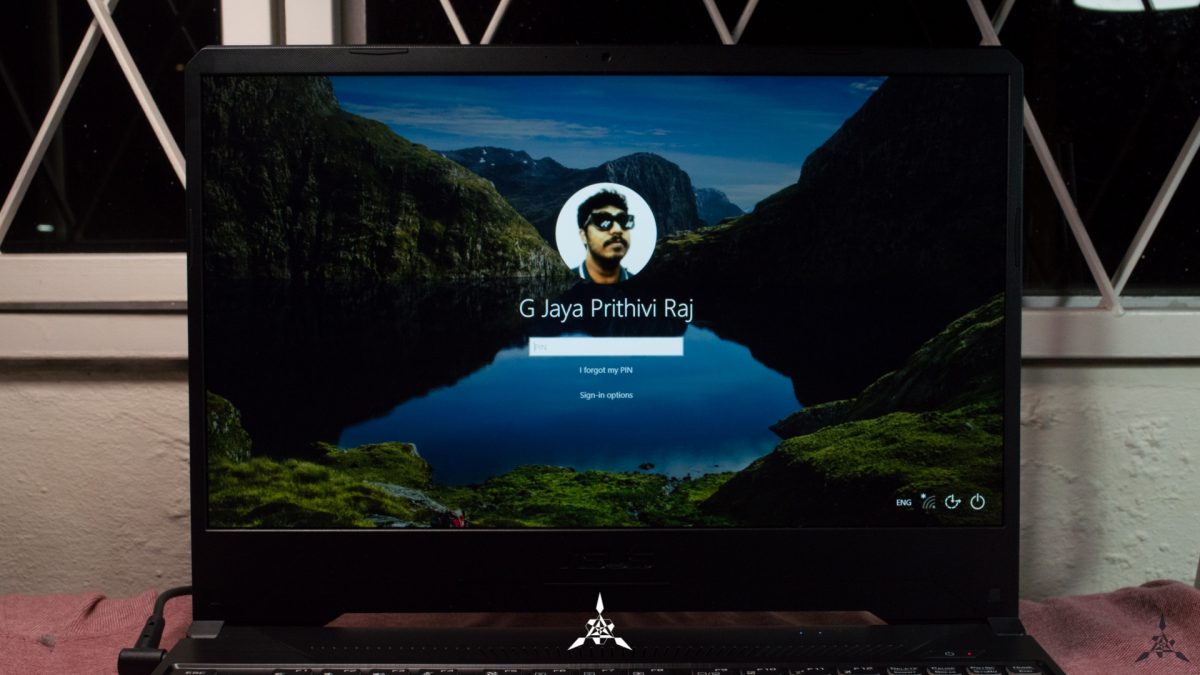 Unlike the name, the laptop retains the same DNA – the design that we saw with the previous FX504 and the original FX503. On the outside, it still carries the same design at the predecessor but in a much more compact size. Now it has a much more cleaner and a simple design with the slash marks at the corner which gives a subtle look. Since TUF Gaming laptop has Yellow as it’s brand color – the ASUS Logo has a more of a gold backlight to it. Now, on the inside, you’ll notice a fair amount of change. The display has thinner bezels and it has this brushed finish on the keyboard to give the metallic finish to it. It does look glossy. The whole area is a lot smaller and everything is constrained in the small space. It does give a feel as if I am using the Scar II which exactly has the same layout and the first to have it. Not to forget, it has a TUF Gaming logo on the inside. I am not really a huge fan of this obvious brushed texture. I really wish it had a plain texture instead. Something like you see on the surface of the laptop.

As for the build quality, the laptop is completely constructed in a plastic body and a metal frame on the top. The first time I held the laptop, it was lighter than the predecessor and it is by 100 grams comparing with the FX504. Other than that, the FX505 has some interesting feature. Despite it’s light and compact build for a gaming laptop, it has a Military Grade MIL-STD810G – which is certified for drops and even can handle up to 85 kg. This is relatively new to see in this gaming laptop space and I am convinced to see this on such laptop. Well done right there.

We found out that the TUF Gaming Laptop comes with two different finish – the Gold Steel, which you see in this review and the Red Matter. The Red Matter has a complete Plastic / IMR finish and the Gold Steel, as the name suggests – has a sand-blasted finish.

Asus has included all the I/Os on the left side of the laptop. You’ll find a DC IN Port, RJ45 Ethernet Port, a HDMI 2.0, 3 USB Ports and a Headphone/Mic Combo Jack. On the other side, you’ll find the Kensington Lock. Once again, Asus no longer includes a SD Card Slot and they do not include a USB-C Port as well. Considering the fact that companies are opting in to include these two as an essential feature, it’s sad to see that this laptop is missing those. 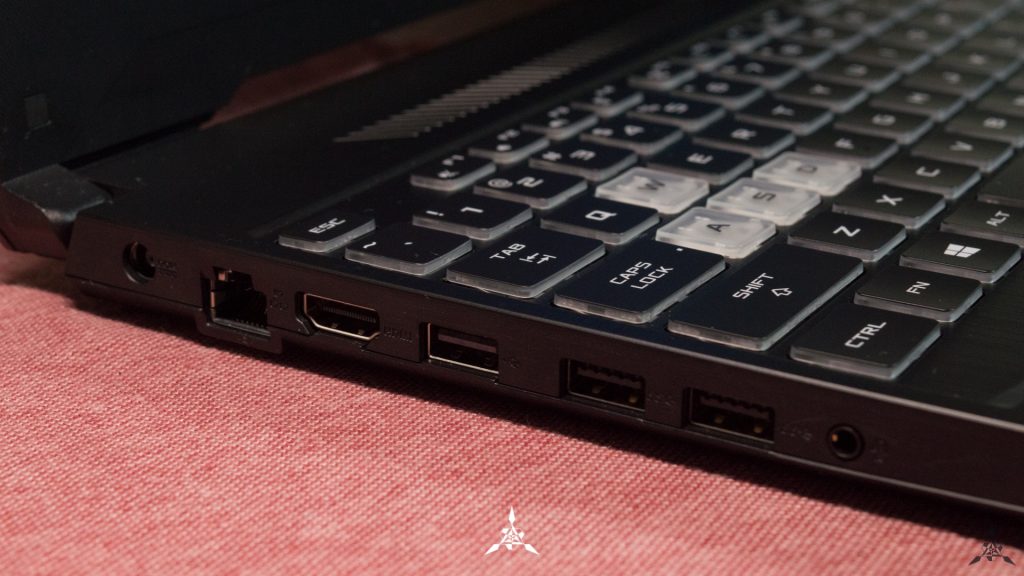 In terms of connectivity, you get the support for 802.11 ac WiFi and Bluetooth 5.0 – which makes life a lot better right now. The connectivity isn’t too shabby and there isn’t a spotty or laggy response to begin with and during my time using it – it was completely fine. 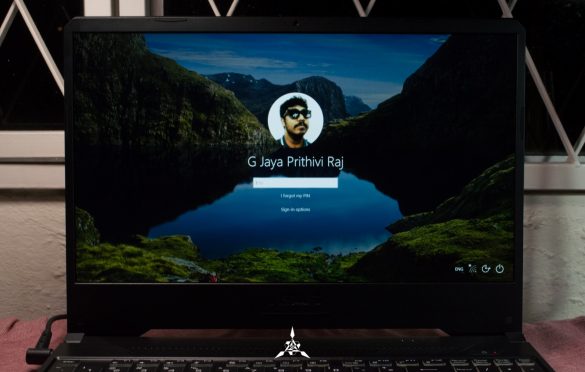 One thing ASUS has upgraded on the TUF Gaming Laptop, it’s the Display. Our unit is equipped with a 15.6” Full HD IPS Display with an Anti-Glare layer on top of it. It covers about 72% of the NTSC color space which equivalent to 100% sRGB Color Space. Since there’s an Anti-Glare coating on it, the display is nice to view in a well lighted room with no reflection. The IPS Panel has a good viewing angle all around, making it a good companion for viewing content or even playing game.

Since there’s a coating on it, you could edit images with Lightroom or Photoshop, but chances are, there will be very little color change from a high-grade panel. What makes this whole display better this time is the 144Hz Refresh Rate which now boosts the gaming experience to a whole new level. We played 3 different titles to see how good it is – so, we fired up one of my favorite title, DMC, Evil Within 2 and Need for Speed: Payback. Since DMC is more of an older title, we were using the Definitive Edition which has been upscaled to 60 fps. In this laptop, we touched about _ fps. Whereas with Evil Within 2, it was within the range of _ fps and the Need for Speed was _ fps.

This is pretty good for a display with 144 fps. Of course, it doesn’t have features like NVIDIA G-Sync to limit the tearing or motion blur, but anything at 144 fps, I’ll take it because their previous laptops only came with a 120 Hz display and it was a TN Panel to begin with. So, 144 Hz is the way to go.

ASUS sent us the decked-out version of their TUF Gaming Laptop. Our FX505 comes with an Intel Core i7-8750H coupled with 8GB of DDR4 RAM. As for the Graphics Card, it houses an NVIDIA GeForce GTX 1060 with 6GB of GDDR5 RAM. In terms of storage, it has a combination of SSD + SSHD: A 128GB SSD with a 1TB SSHD.

As for the performance, we performed some benchmarks to see how the laptop handles itself. So, we ran CrystalDiskMark for the Disk speed. Followed that, we ran PC Mark. Finally, to verify what is under the laptop – we used CPU-Z to get a quick run down on the specification itself. The numbers look pretty much expected with the i7 Processor having the potential to handle task well and the SSD is faster than the SSHD. Good thing is, the HDD shouldn’t give you any problems as it has a 7200 RPM Speed.

we tried some game titles to see how the whole thing handles. We played the following games: DMC: Definitive Edition, Need for Speed: Payback, Evil Within 2 and Overwatch. Starting off with an older title which requires pretty much less resources to play the game, it works like a charm with a frame rate of 107 – 114. Now, we started pushing the laptop further with NFS: Payback with 54 fps. Finally, Evil Within 2 with 36-40 fps. Good thing is that the temperature while playing every single game we have mentioned here, has handled it below 80 degrees. The moment the laptop realizes that a game is running, the OverBoost Mode turns on keeps the system cool.

By this you can tell, the newer the title, the gameplay is acceptable. Older Titles and simple Indie game works like a charm. But for a laptop with this specification, it handled things well. So, I can say it’s good. What I really loved about it – is the fact that most of the time the temperature hovered around 80 degrees or less and it didn’t throttle. So, thanks to that. This was entirely possible because of their thermal solution – the HyperCool Technology that cools with the help of the dual fan inside.

Asus has included a 64 WHr – 4-Cell Lithium Ion battery under the hood. With that said, if you are planning to take the laptop on a spin and were to get work done on the move – the FX505 doesn’t disappoint. We got about 3 hours of battery life on average – this includes watching Netflix, editing on Lightroom and writing articles. Now I can’t say the same for gaming because just like any other gaming laptop, the laptop lasts for about 1 and a half

The Laptop has two side firing speakers – both on left and right side. These two speakers sound a lot tinnier than the previous FX504 but it’s loud. Just like the previous laptop speakers we have seen, placing it on an incline gives it a better listening experience overall. Of course, it’s not the best speaker on a laptop but it does get the job done. If you are planning to watch some movie all by yourself then shouldn’t be problem. Even with a friend or two, you might need to boost it a bit.

The keyboard on the FX505 has a key travel of 1.8mm and requires 62g to activate. On every single key, it had a 0.25mm curved surface for added comfort. The keyboard feels way too tactile and sturdy, surprisingly I don’t see any sort of weird key wobble. There isn’t much sound when you type it. In fact, it feels like tapping a pillow. That’s how soft the key feels. Despite Asus cramming in the number pad, they didn’t do any sort of compromises to the layout mostly and that’s what I really like about it. Also, I was a huge fan of the Transparent WASD Keys on the Scar II and the TUF Gaming Laptop has it – so that’s awesome. While playing games, you can feel the warmth on the right side around the enter, backspace and equal key.

This time Asus as gone to an extent to include AURA Sync Support with the keyboard and now it has a one zone RGB Lighting. It sure is a step ahead from its predecessor. You can change the mode in the Aura Settings that you can find in the Settings. It pretty much has all the other features like N-Key Rollover and so on.

The trackpad on the TUF Gaming laptop is relatively in a normal size, I’d say. Other than that, the laptop runs Windows Precision to make the whole trackpad intuitive to use. You don’t have to worry about anything as gesture control works like a charm. Also, the trackpad is sturdy and didn’t have any sort of wobble or defect – which is good.

Previously when Asus unveiled the FX503, it was nice to see a new addition but after that, it went through this identity crisis. But now the Asus TUF Gaming FX505 finally feels like it’s in the right direction. With a specification this decent – a GTX1060, Core i7, 128GB + 1TB and a massive improvement in the display category, it sure is worth the purchase. Comparing with some of the other contenders, the ASUS TUF Gaming FX505 is competitively priced and pretty much satisfies someone who wants to get their hands on a gaming laptop with a limited budget.

Time to Spend because Shopee 11.11 Big Sale is Here!