Tablets are getting niche day by day and when it comes to an Android Powered Tablet, its coming to a point that it will be non-existent in the matter of time. But that doesn’t stop Samsung from manufacturing their new tablets. We were graced with the Samsung Galaxy Tab A 10.5 (2018), their new tablet which is in the affordable segment a long while back. The Tab A series is known to offer a value for money. Does it hold the fort for that? Find out more in this final verdict of the Samsung Galaxy Tab A 10.5 (2018) Review.

We would like to thank the wonderful folks at Samsung for gracing us this opportunity to review the Tab A 10.5. 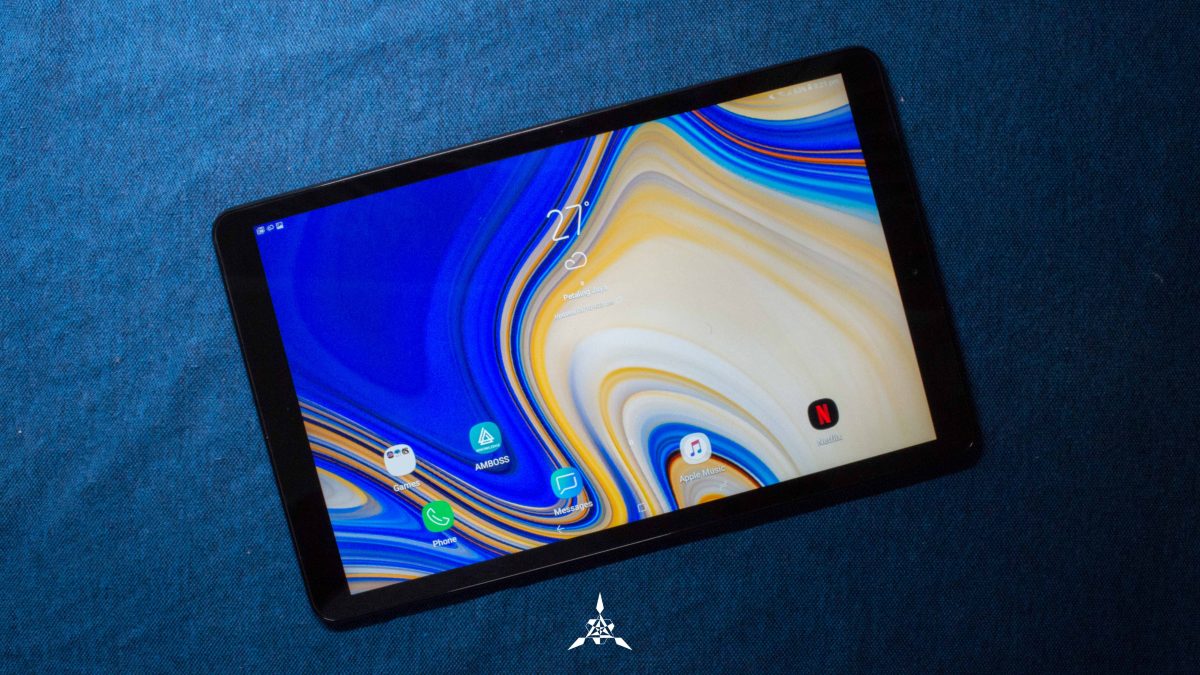 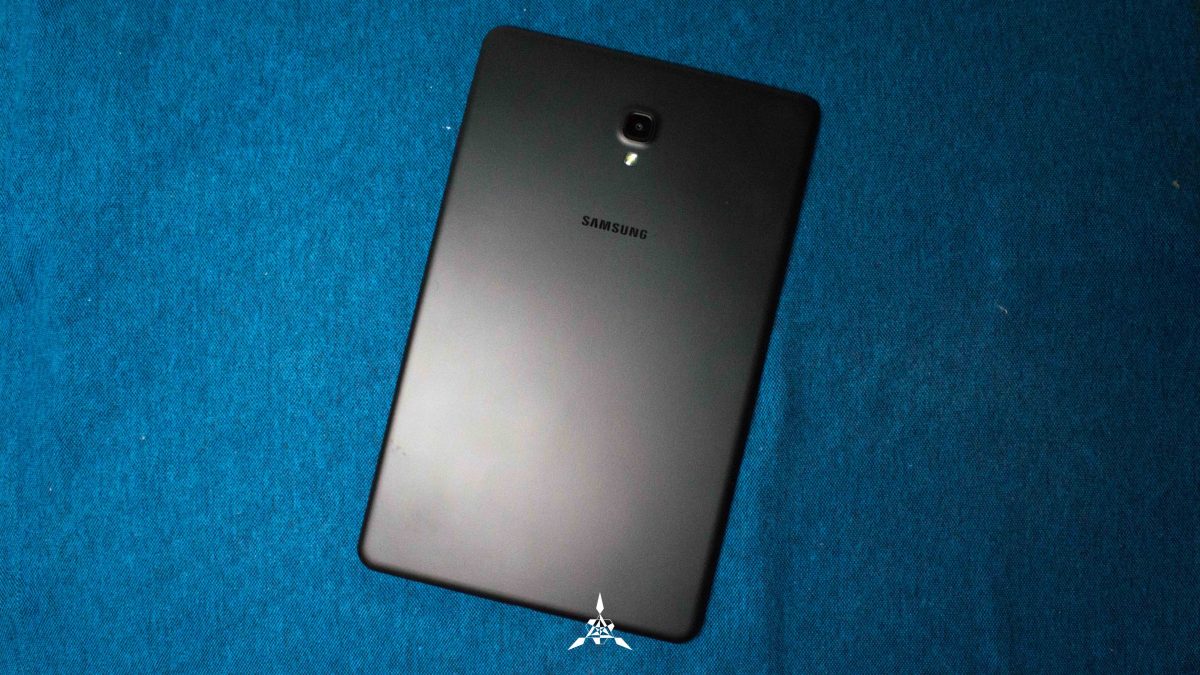 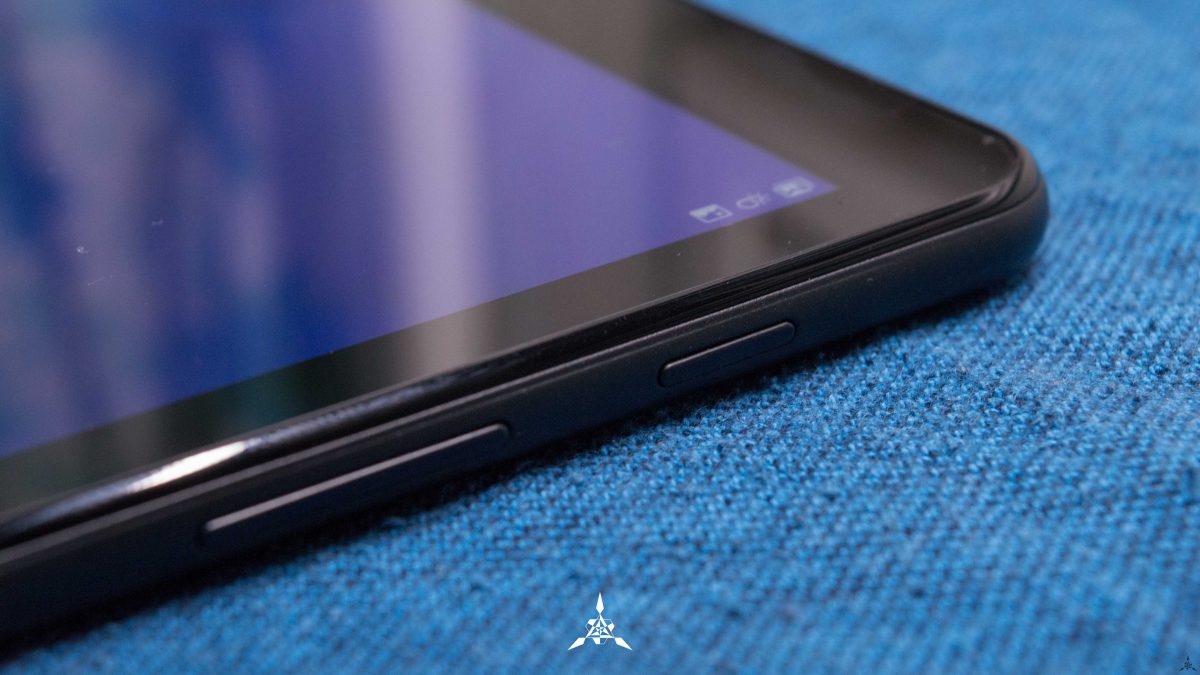 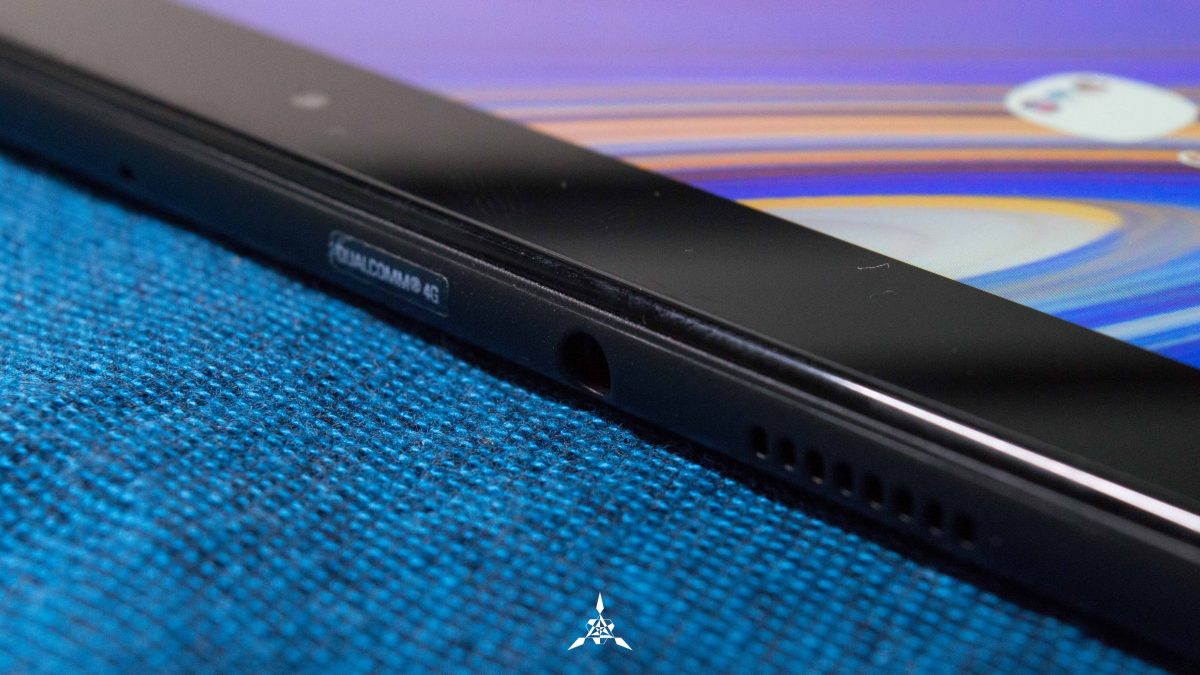 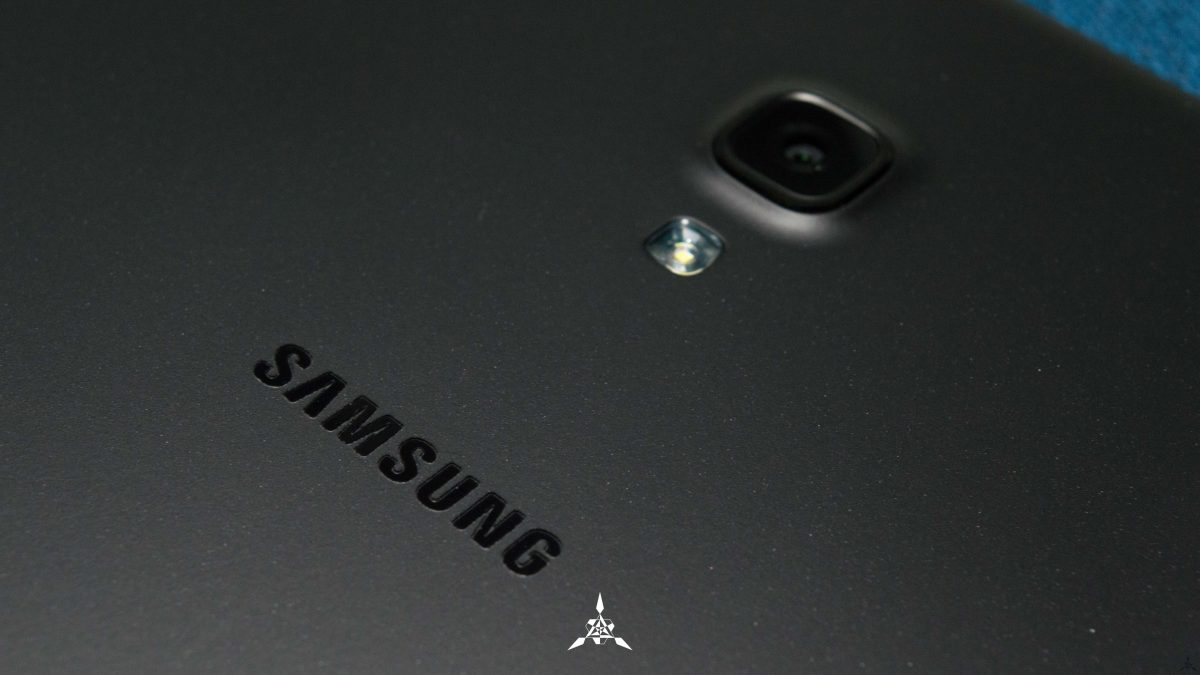 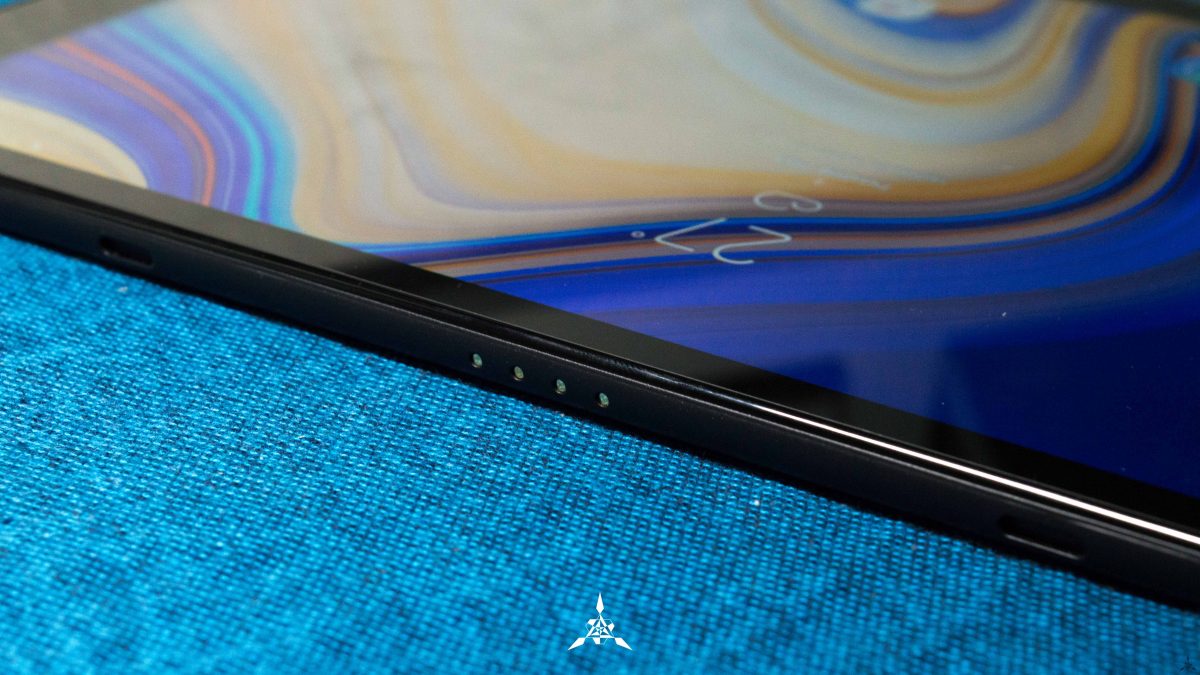 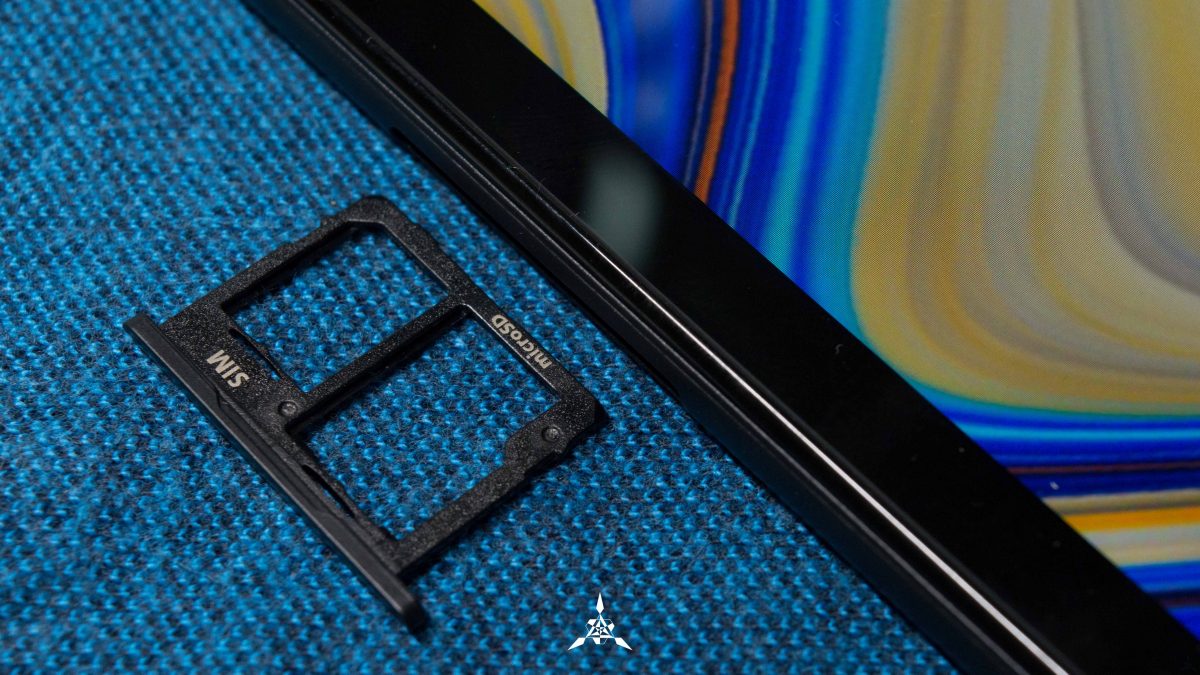 If there’s one thing that never changes generation after generation, it’s the way Samsung Galaxy Tab A 10.5 is designed. This time on the front, we don’t see any Samsung Logos or branding to be seen but instead it rocks this muted look to it. On the back, Samsung has a very simple design going on as well. The once again muted look with this black finish gives it a really simple feel and nothing more than that. Even the Samsung logo at the back is in this dark black glossy print that looks good too.

As for the build quality, the Samsung Galaxy Tab A 10.5 feels like a good tablet. On the front, it has a 2.5D Glass with Oleophobic coating and no screen protector on top. On the back, the Galaxy Tab A 10.5 has a soft touch matte finish that gives a grippy feel in the hands which I really love about. One cons with such texture is that it gets easily scratched if you keep on a wrong surface. So, you’ll have to be very careful handling it. But I am sure you’ll get a case when you walk out of the store. Since it’s a huge device, dropping it can be scary which is why we would recommend you to get a case before you walk out of the store. It weighs about 534 grams which is heavy but it gives a solid feel when you hold it.

The Samsung Galaxy Tab A 10.5 has a Qualcomm Snapdragon 450 Processor clocked in at 1.8 GHz followed by 4GB RAM and a 32GB Internal Storage that can be expanded with the help of a Micro SD Card slot which is definitely a nice touch. For a tablet this big, Samsung approach to opt in for a 450 Processor is a different move but then again, it’s a tablet that’s catered for people who want to take their productivity on the move.

Below, we have included the benchmarks for the device. Do take note that benchmark scores do not add up to day-to-day performance. But what it does is that it can give you a rough estimation on how it would perform. 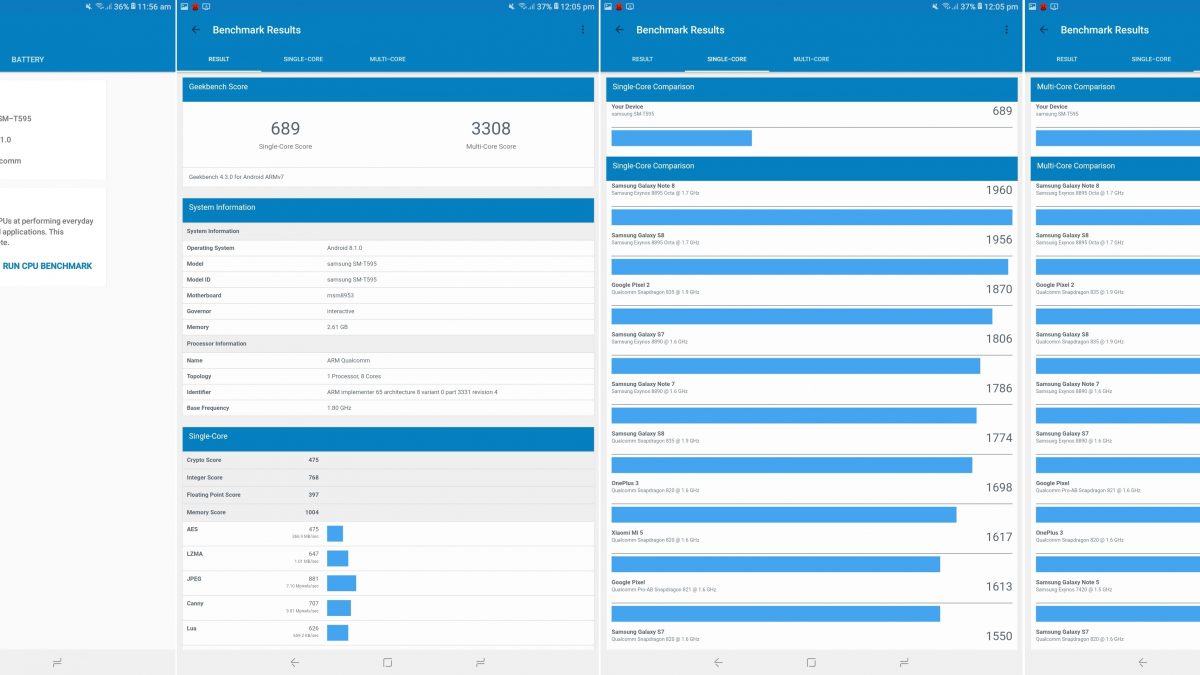 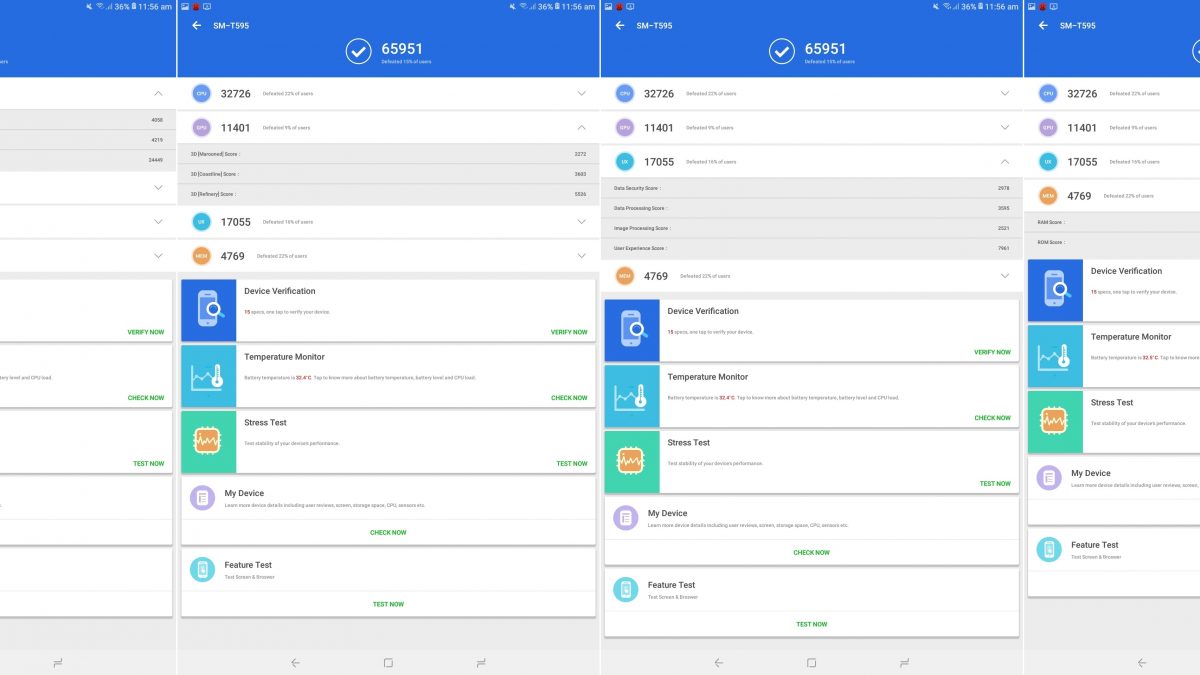 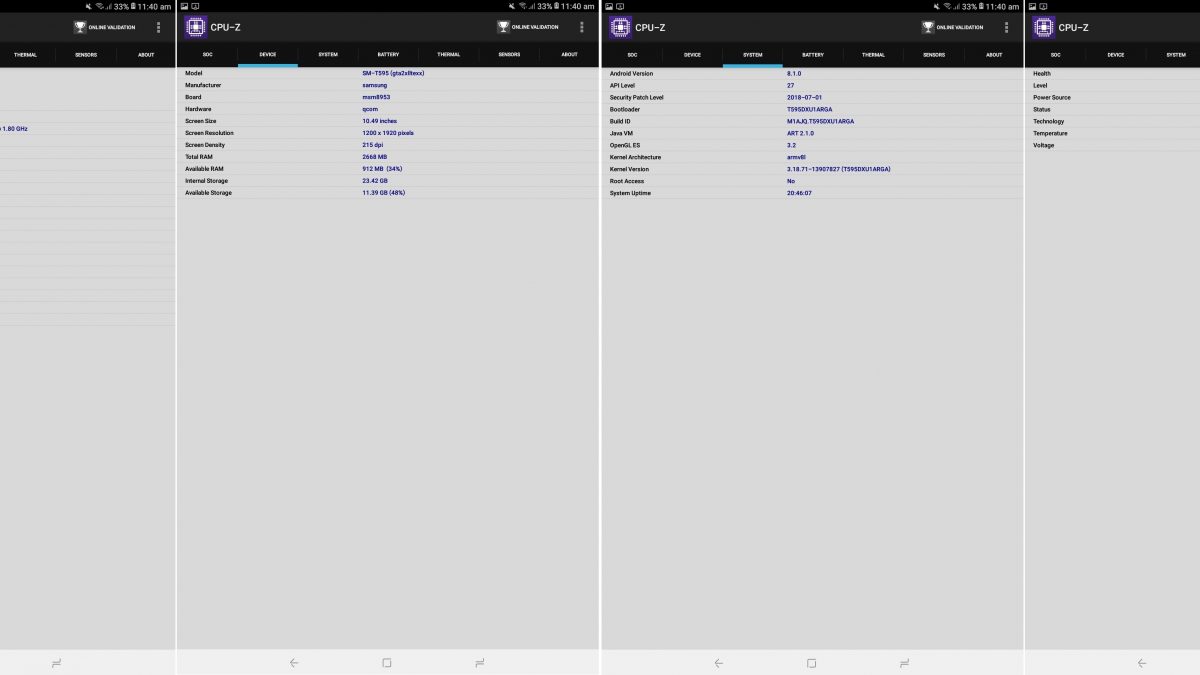 Samsung has took a leap from their previous screen size. This time the Tab A 10.5, just like the name suggests – has a 10.5” FHD+ TFT Display in an 18:9 aspect ratio. The display isn’t an AMOLED panel but nonetheless, the colors are sharp and nice to look at. The tablet screen brightness was good enough both outdoors and indoors. This didn’t create any issues. There is a very mild grey tint that makes the display look washed off at certain angles. Watching series or movies on Netflix had no issues – the blacks are not as deep or true to an AMOLED display but it does a fair amount of justice. 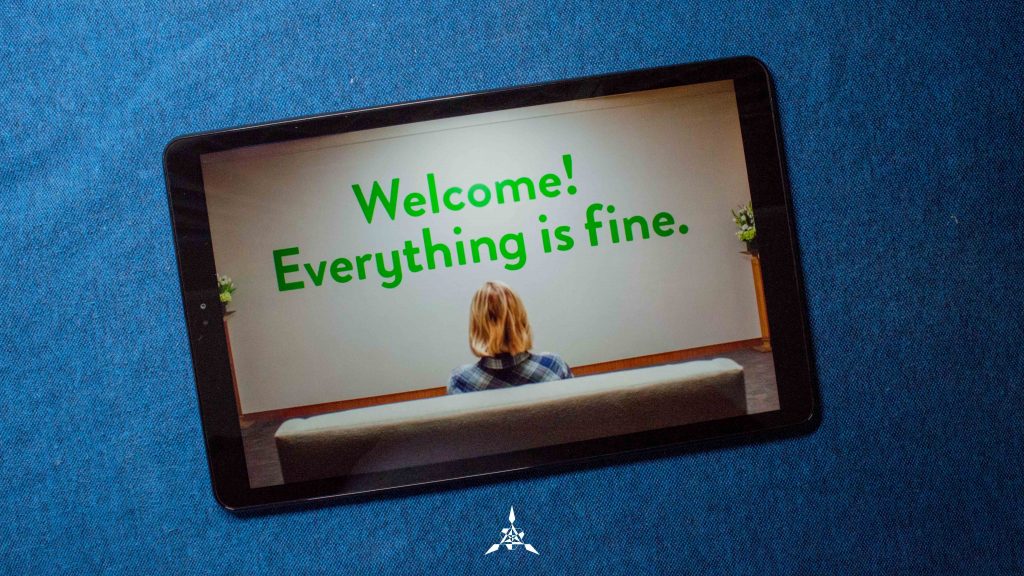 Since it has a huge display, opening up Word, Excel or any productivity centric application gives it a upper hand as it has more room to change and interact with. This is definitely the key highlight of the Tab A 10.5. During my time using it, I enjoyed using it to read some journals, notes and watch few episodes of Brooklyn Nine Nine on Netflix. 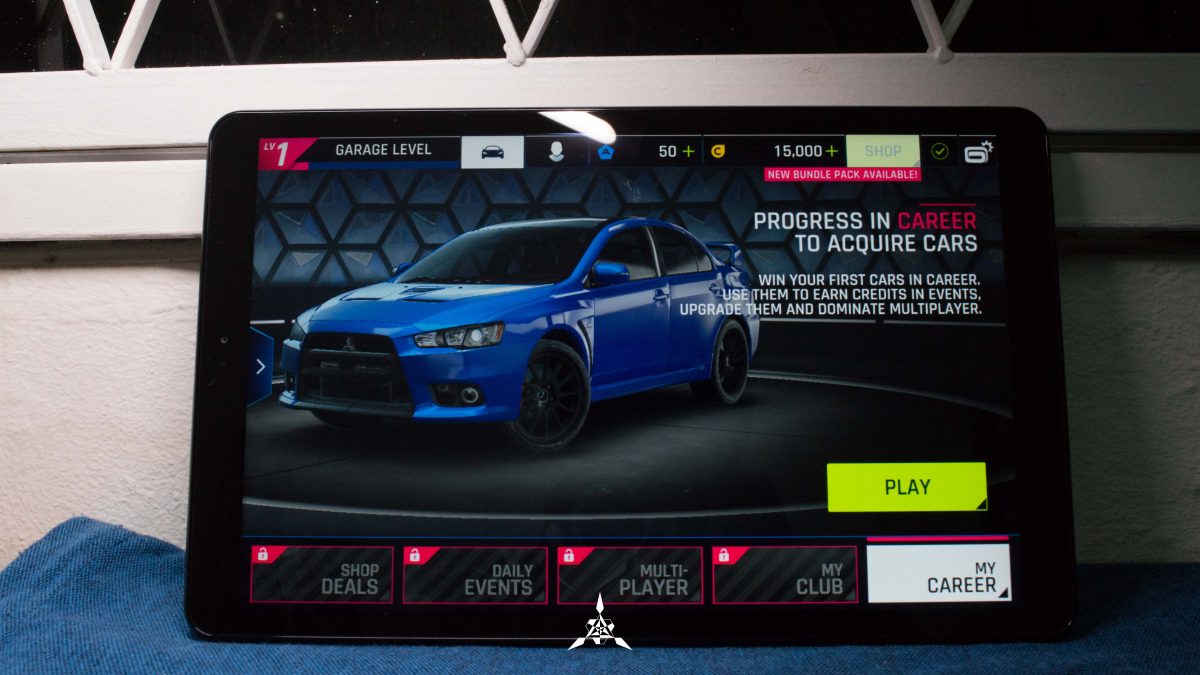 Just like the specification suggests, this tablet is only good for productivity related tasks. Taking notes, writing documents, reading an eBook and so on is nice to perform. Watching a show or even on YouTube is still fine. We installed Asphalt 9 just to see how it works and the game play felt slow and sluggish. If you are planning to play some lighter titles like Limbo or Monument Valley, then that should be fine.

Under the hood, the Samsung Galaxy Tab A 10.5 comes with a whopping 7300 mAh battery and good thing the tablet has support for Fast Charge. During our time using it, we popped a SIM just for two days to bring it on the move and at the end of the day, we always had about 30-35 percent of battery left with a Screen on Time of 7 hours and the tablet being unplugged for 13 hours+. Under standby the tablet didn’t lose much because one day later, I still had about 95% battery. You cannot go wrong with the battery life on this tablet.

As for charging, it takes roughly 3 hours to get it charged from 0 to 100. That’s a long amount of time but as you might be connecting it to the charger at night, I guess you don’t really have to worry about anything. 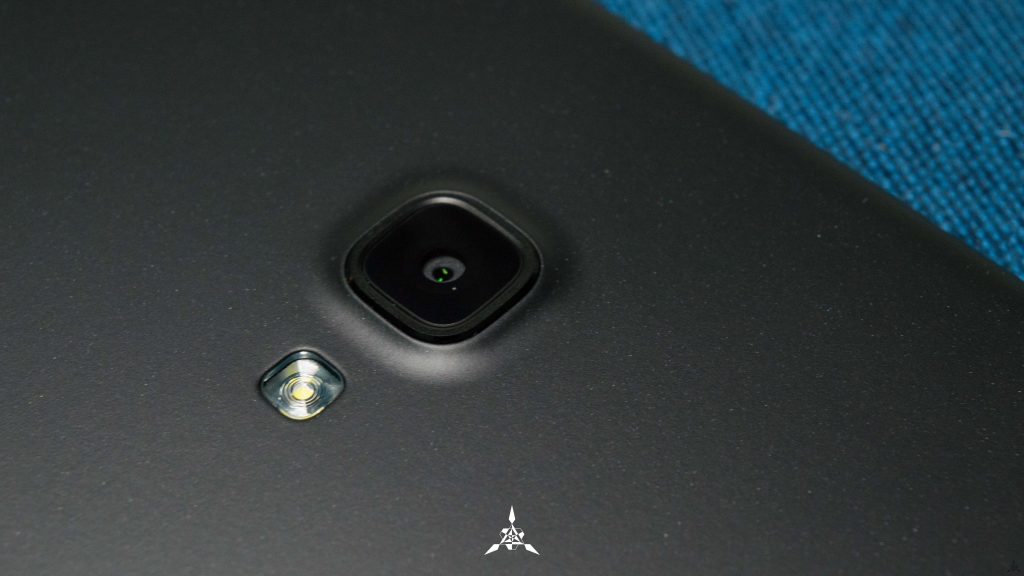 On the rear, the Samsung Galaxy Tab A 10.5 (2018) has an 8MP Camera. These pictures taken with the rear camera isn’t going to blow away. If I have to say, the camera is serviceable. There sure is a bit of grainy effect over shots and sometimes has an over saturated color to it. When there’s light, it captures acceptable pictures like the shot of the DSLR but in the other picture with an RGB Mouse, it looks grainy and has a hit on details.

On the front it has a 5MP Selfie shooter and the noise level is real. On the other note, the exposure is fine and there isn’t any overblown exposure so that’s a good sign. You can use it for Skype Calling and other video chats to talk with your loved one and it definitely serves the purpose right there. 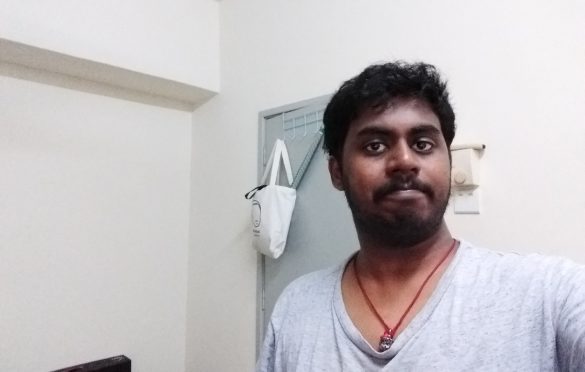 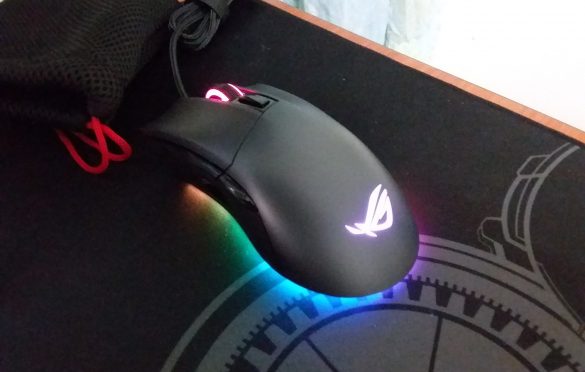 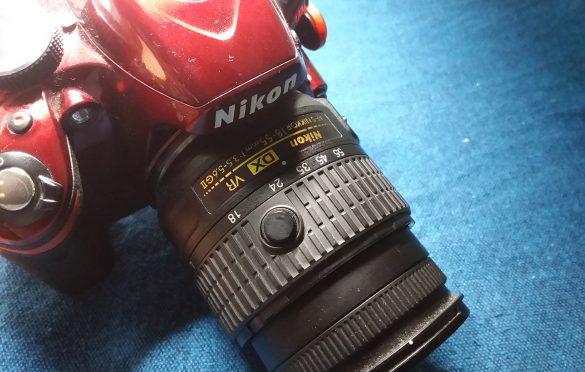 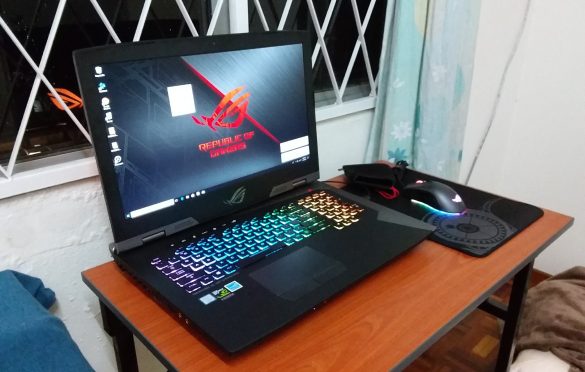 One thing I can tell that I genuinely enjoyed with the Tab A 10.5 are the speakers. It is equipped with Quad Speakers – two on each sides to give the best experience possible while listening to your favorite songs or even while watching movies or shows on Netflix. These speakers have support for Dolby Atmos and the built in control allows users to change the profile to their liking. 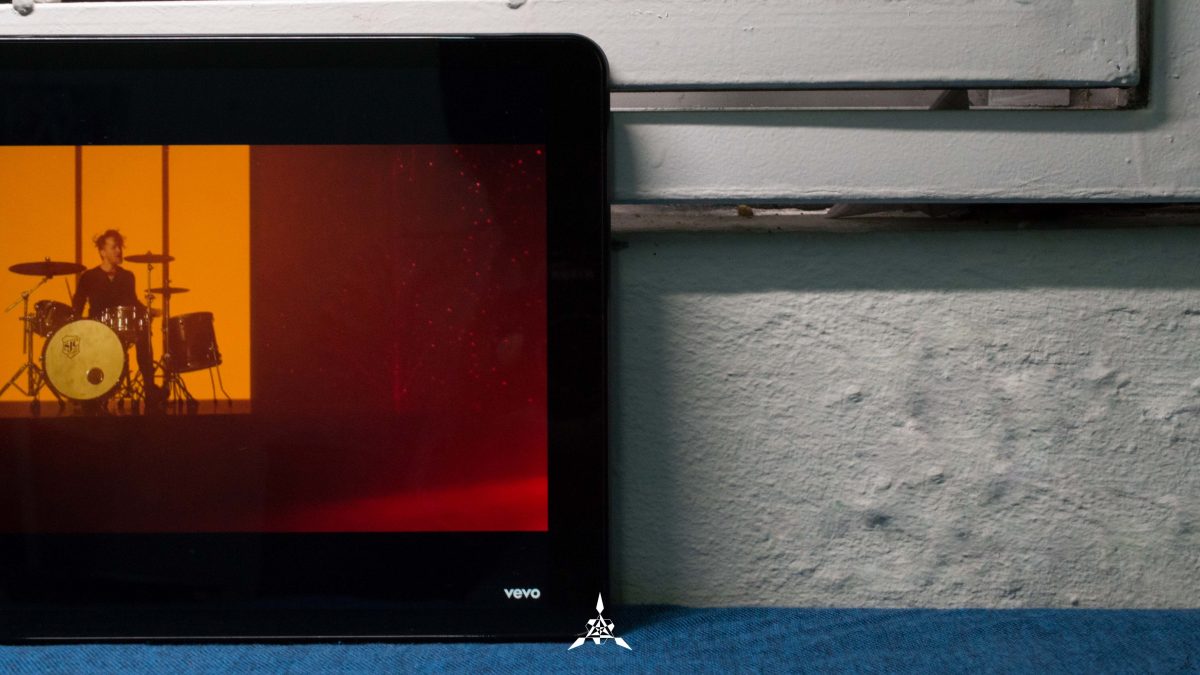 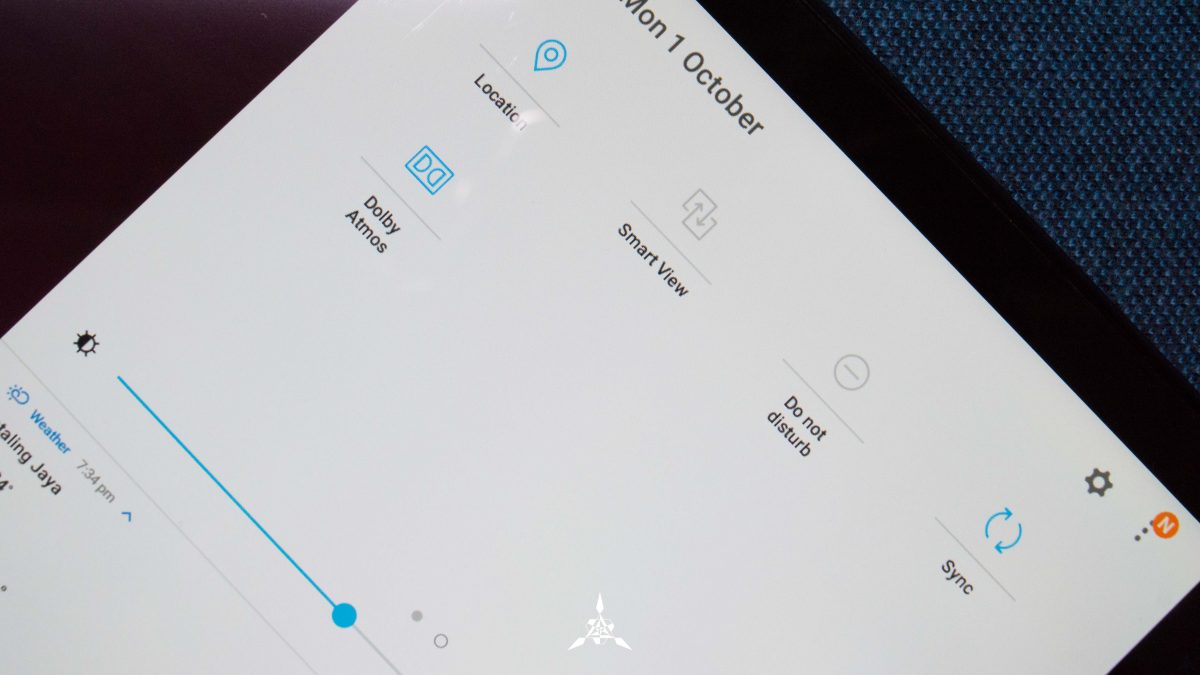 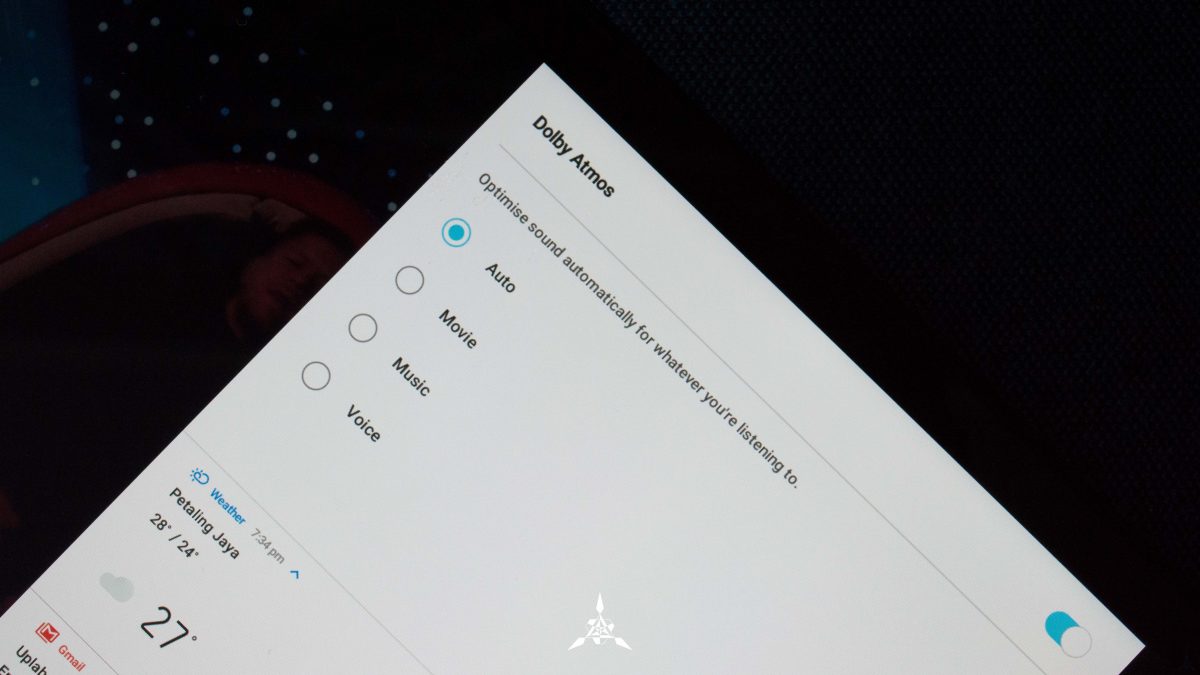 I have to say, I really enjoyed watching shows on the Tab A 10.5 thanks to it’s Quad Speakers. Not only the audio was loud, the quality of the sound was rich and nice to hear. There wasn’t any distortion at higher volume and it handled very well. 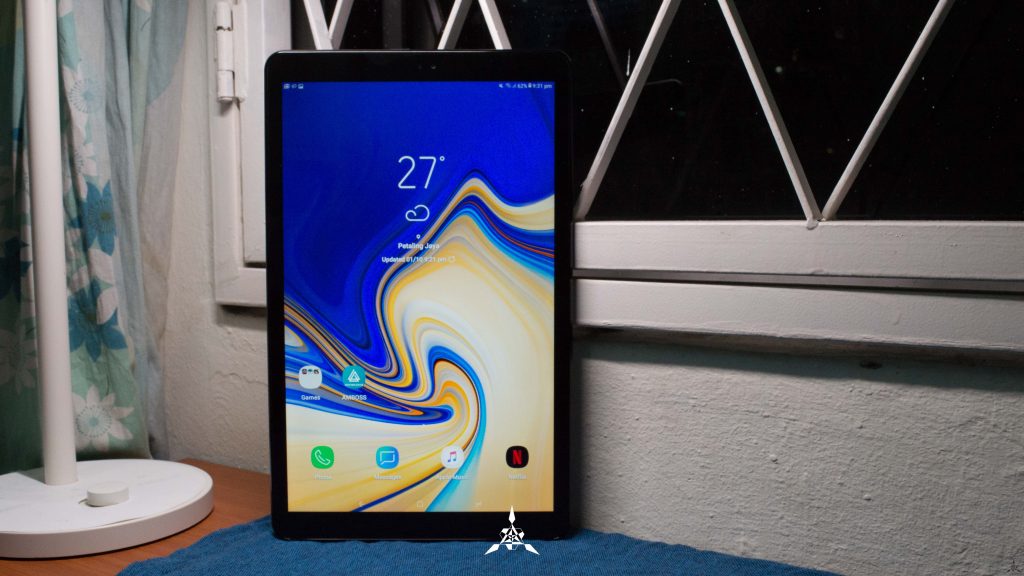 Just like their smartphone, the Tab A 10.5 uses Samsung Experience on top of Android Oreo. The whole experience is cleaner and easy to navigate around as it’s bigger. Samsung has added some interesting features along to the tablet – like for instance Daily Board, which gives a glimpse of how the weather is, the time and a slideshow of pictures. It gives a very nice vibe and looks like a smart display on the desk. They have a Dock for it that connects with the POGO pins at the bottom. Another feature they included is the Kids Mode which protects kids from the internet by only showing appropriate kids content. 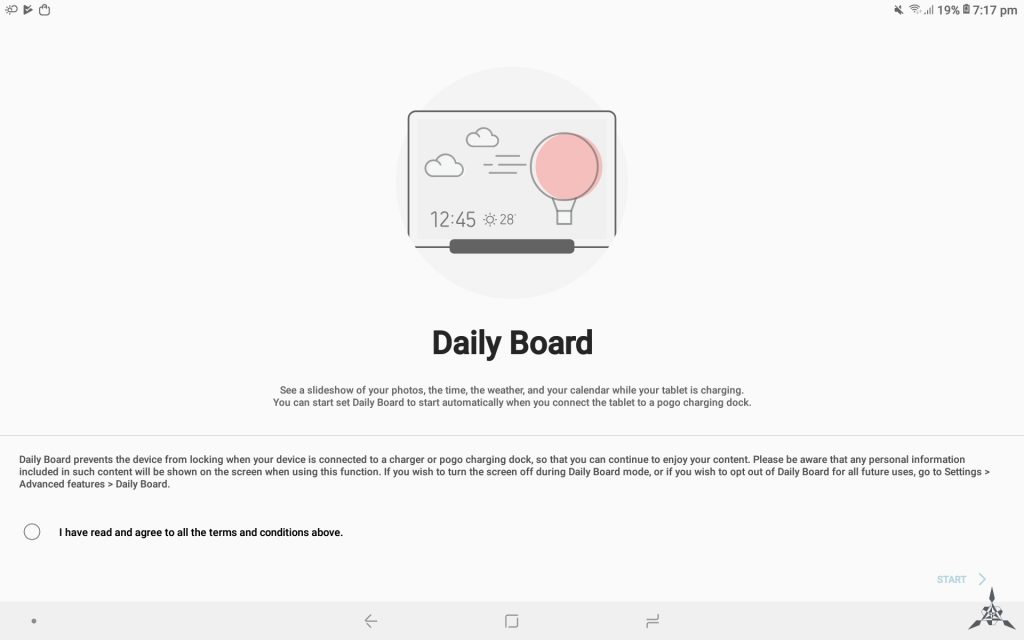 As it’s running Android Oreo – this gives a better experience too. Not sure whether it will get update to Android P but we’ll see.

The Samsung Galaxy Tab A 10.5 is a tablet for those who wants to take the productivity on the move. If you are a student, you’ll enjoy using it for classes like me. I wish it had the support for S Pen as it would definitely brings the productivity to another level. But despite the lack of an S Pen, it still is one good tablet to recommend. If you prefer more power then you can opt in for the Tab S4 but take note as it comes at a price.