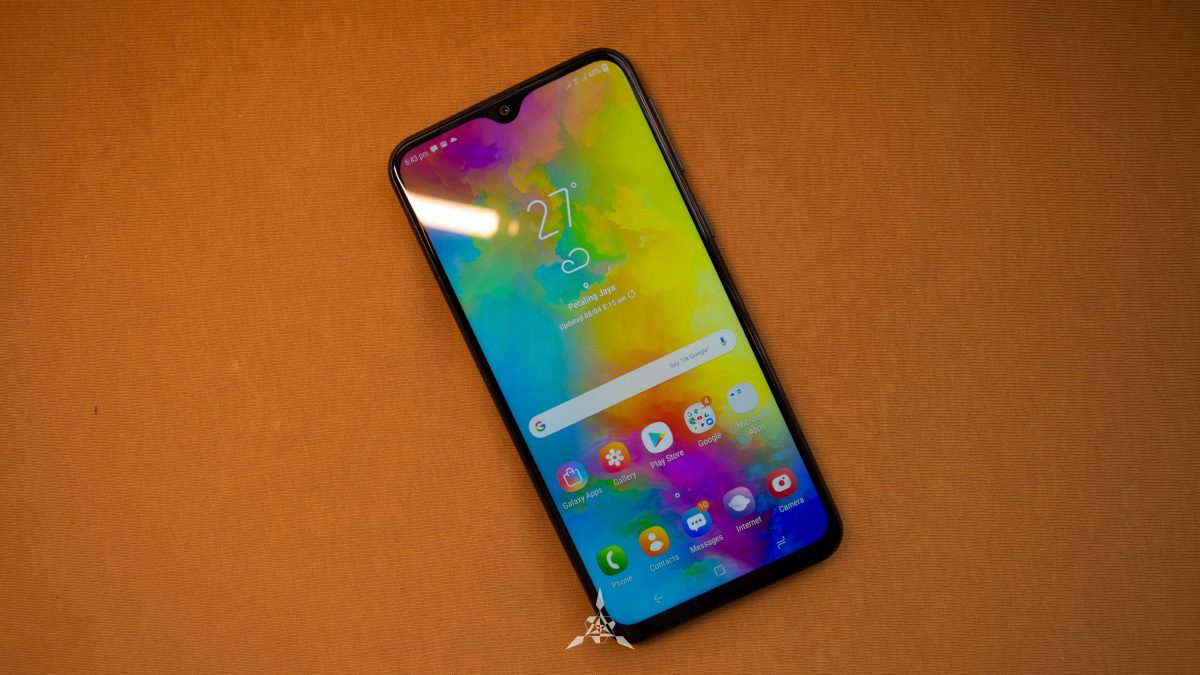 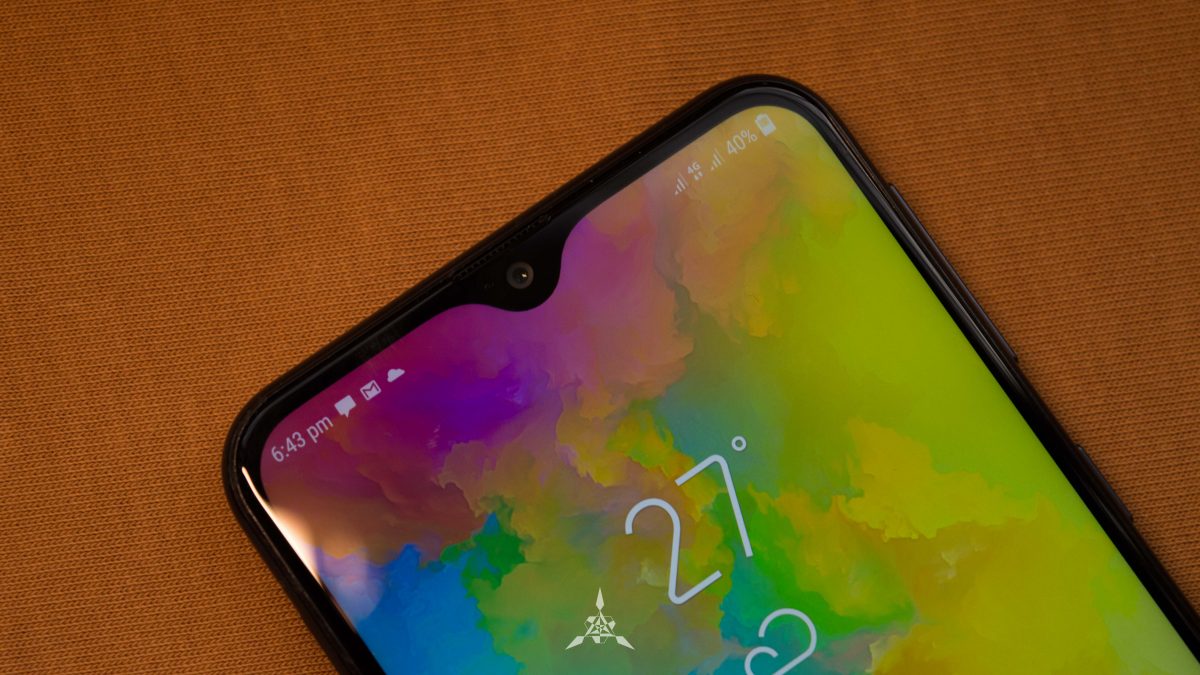 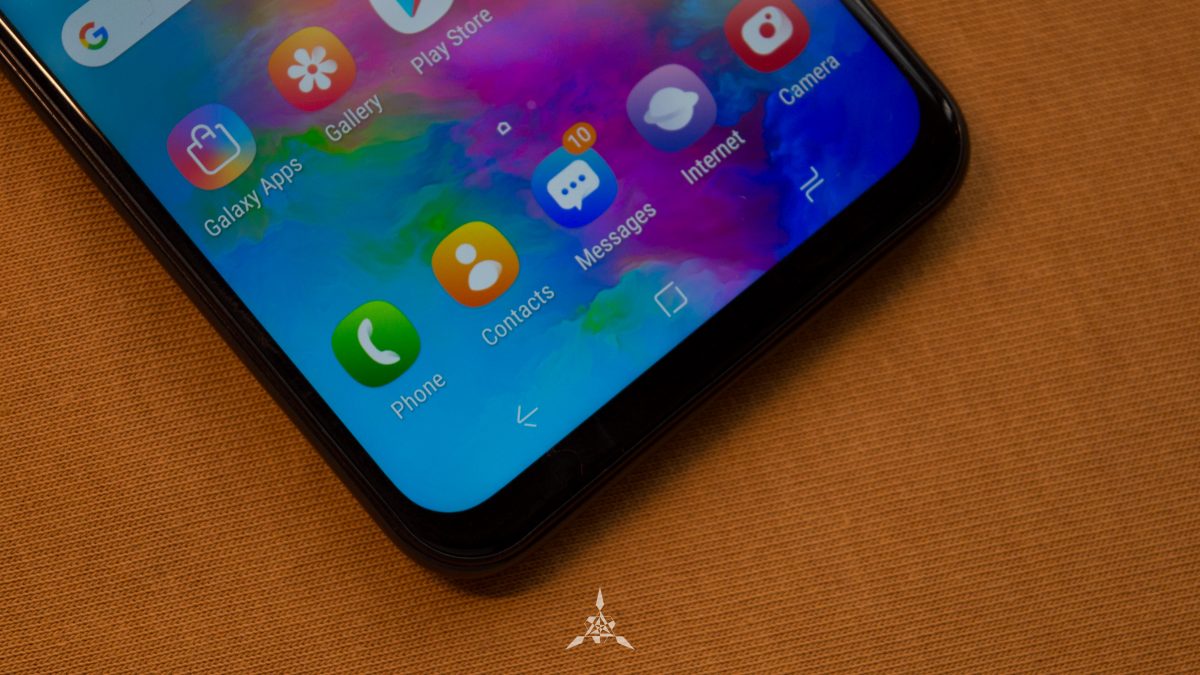 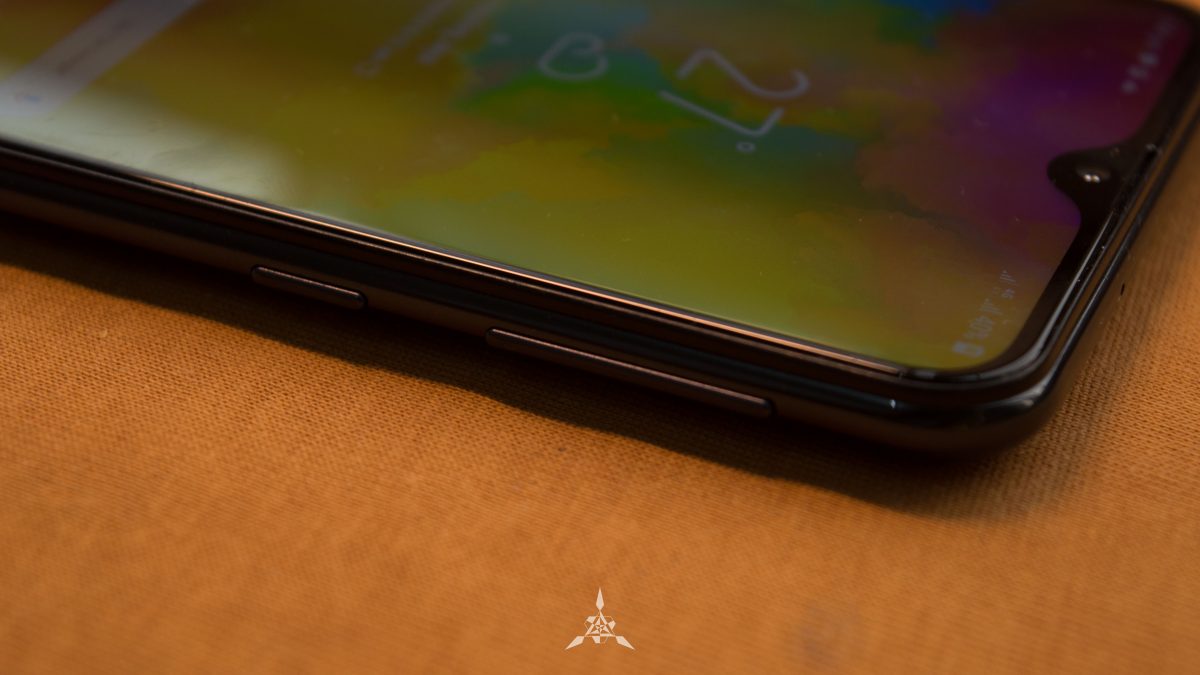 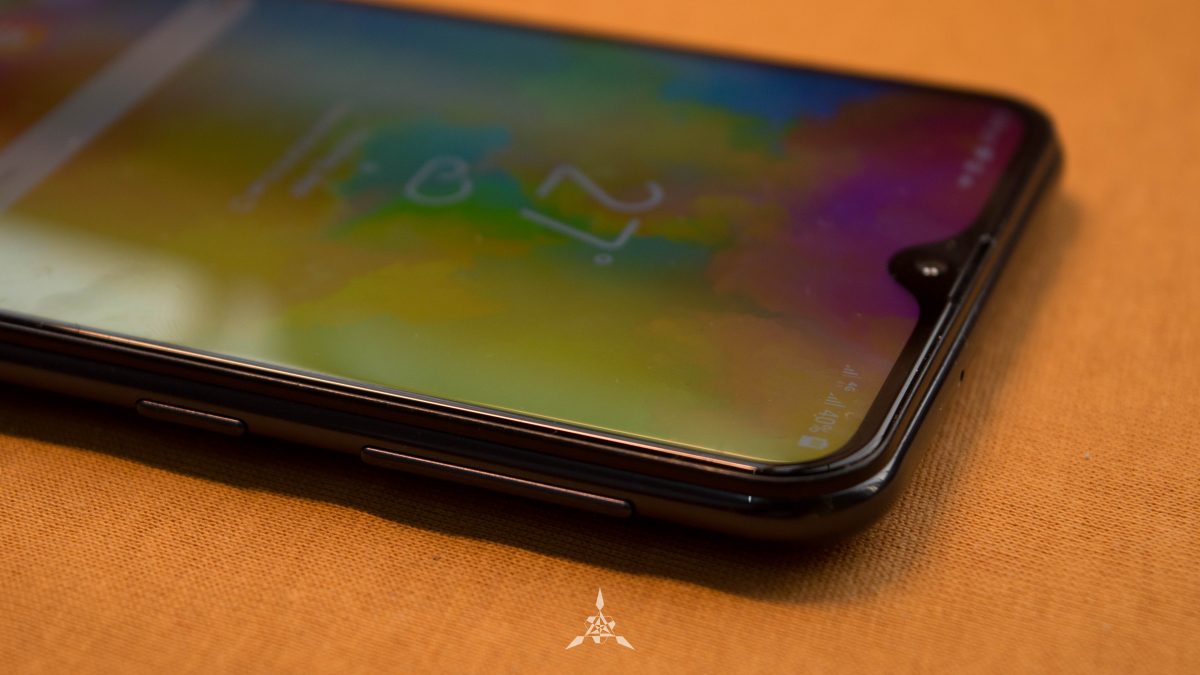 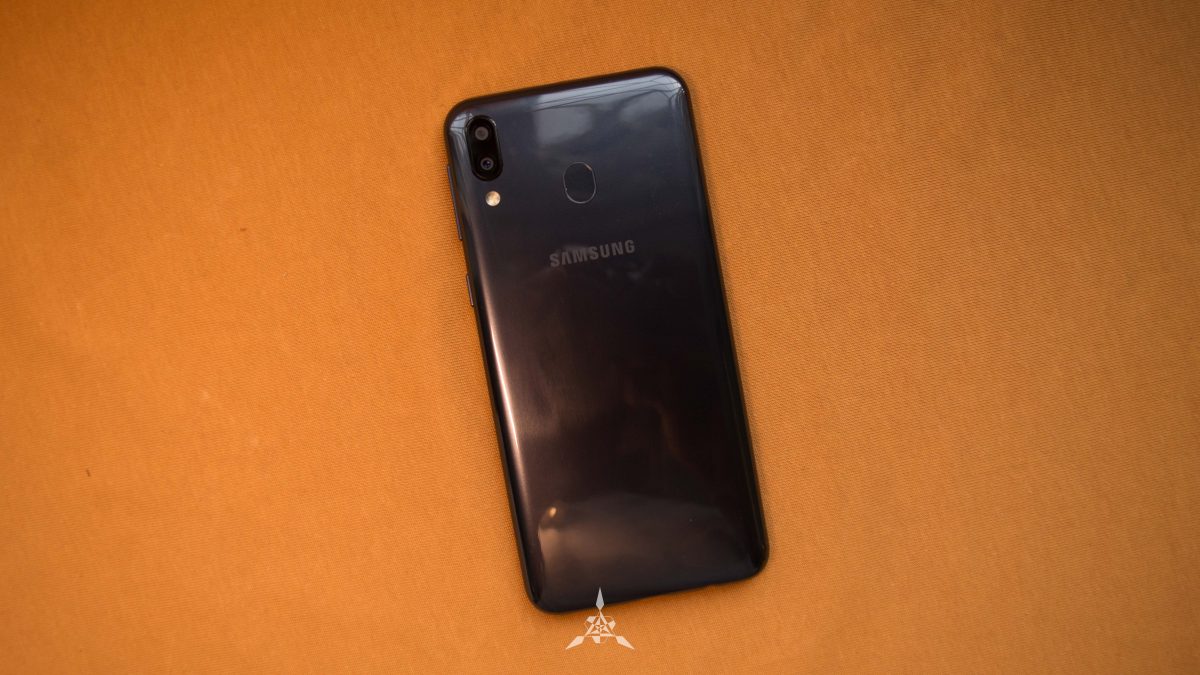 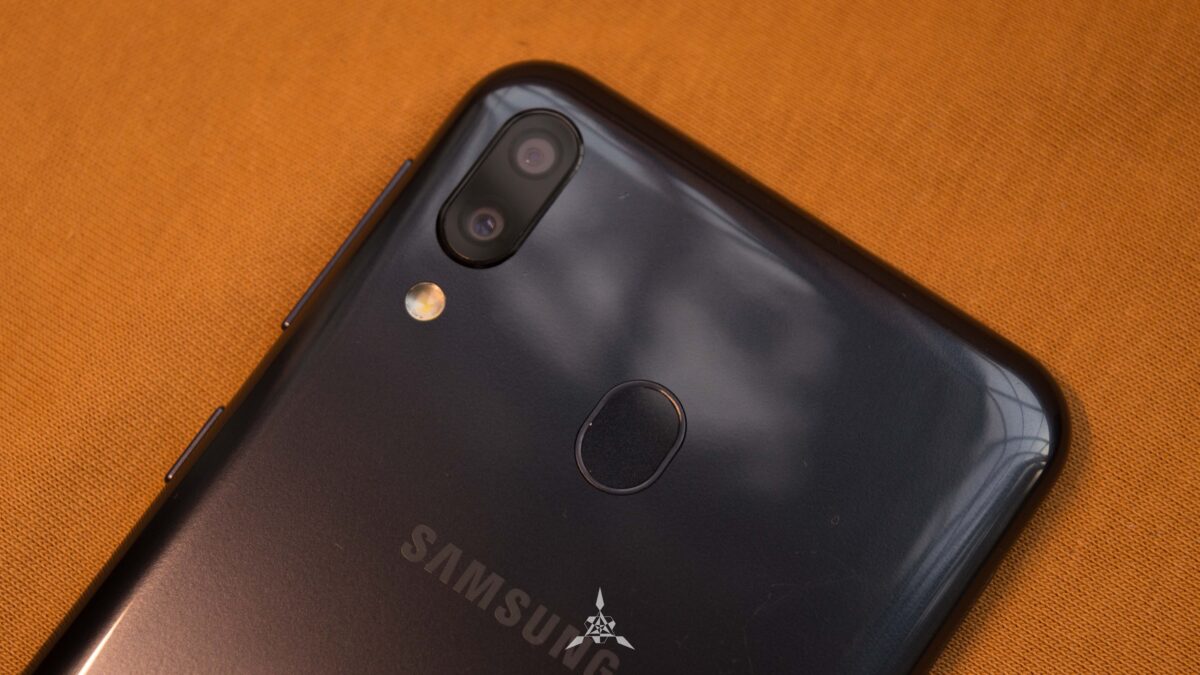 The Samsung Galaxy M20 has a very simple yet familiar design that we have been looking at from other manufacturers in the past. It has a curve design all around with rounded off corners and if you notice, the display frame isn’t flushed in but it’s in a lifted manner. Other than that, the buttons are located at the usual right side and the SIM tray at the left side. On the back, you’ll find the fingerprint sensor along with the Samsung Branding and the Dual Camera setup on the side. This is possibly the glossiest phone we have ever come across because the shiny coating on the back is totally something else. It sure is fingerprint magnet and feels slippery, to which we would suggest you get a case to protect it.

As for the build quality, the phone is extremely solid and has some serious heft to it. The looks maybe deceiving but the moment you hold it, you can tell it feels heavy – but for good reason. Under the hood it has a 5000 mAh battery that pretty much carries most of the weight with it. Other than that, it’s completely fine.

The Samsung Galaxy M20 is a Mid-tier smartphone which boast mid-tier specification. With that said, here’s what you’d find under the Samsung Galaxy M20. It’s exciting to see that mid-tier phones now come with USB-C port, which replaces the Micro USB port which we all know. Very smart move indeed.

As for benchmarks, we performed three benchmarks – Antutu Benchmark, Geekbench and in order to verify the specification, we went for CPU-Z. Take a look at the benchmark score in the screenshot below. This gives an idea on how powerful the phone is but it varies according to day-to-day user experience. 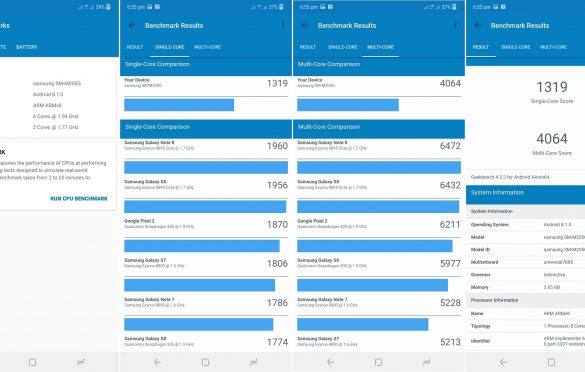 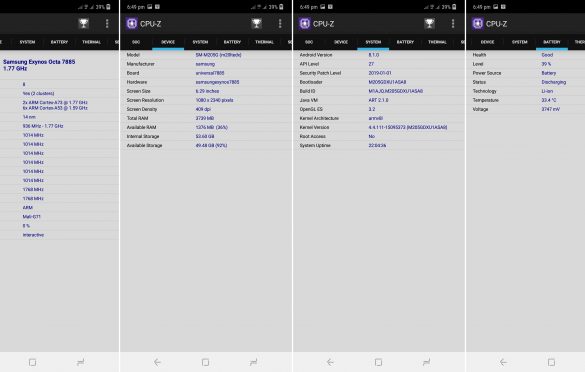 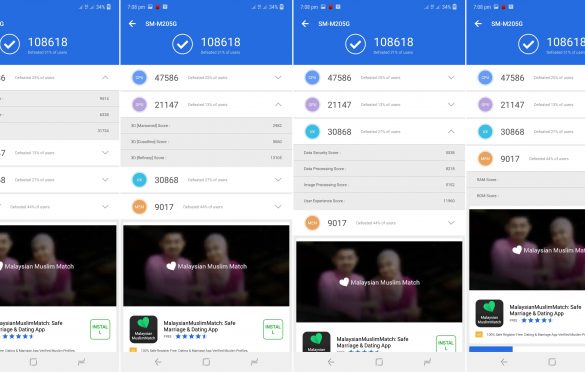 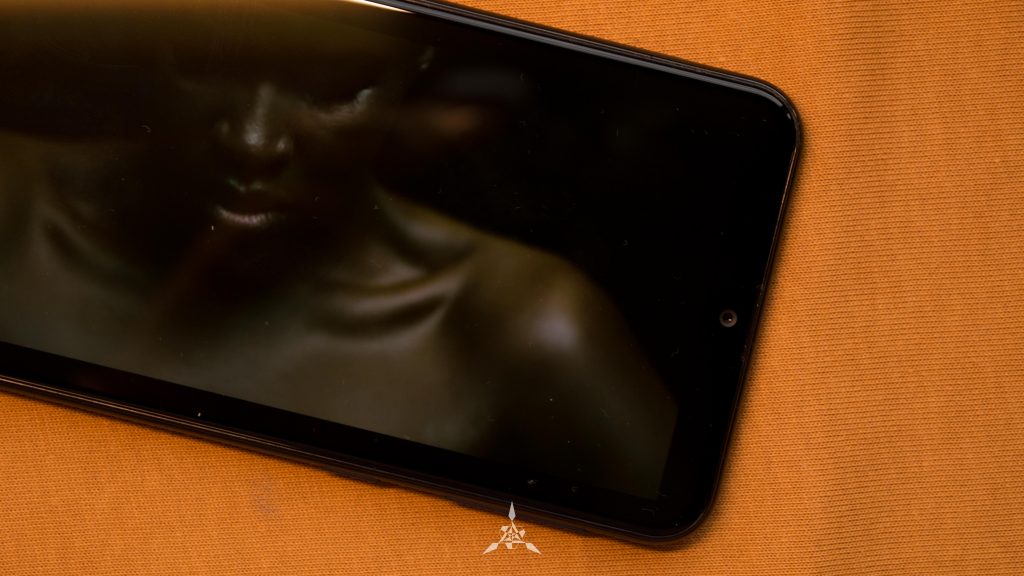 On the front, the Galaxy M20 houses a 6.3” Full HD+ Display with an Infinity-V Display on the top – giving the phone an edge-to-edge screen coverage. This is interesting because this is Samsung’s first attempt in making phones with a notch up top. The display has punchy colors over all and has a Pixel density of 409 dpi respectively. As it doesn’t use any of Samsung’s AMOLED panel on the M20, the colors on the LCD panel they have opted in for the phone has a bit of washed off tones to it. The blacks produced has a bit of light white and a warmer tone to it. Other than that, the display is pretty alright.

Watching shows from Netflix or even from Youtube is good, thanks to the bigger display in a small form factor. The display is responsive to touch and didn’t show any delays or ghosting or any other anomalies as we were using it. Overall, a decent display, nothing over the top.

As we mentioned earlier, the M20 is powered by Exynos 7885, a processor which we have seen previously. In fact, it is an upper Mid-ranger processor and the first phone to make it’s debut with this processor was the Samsung Galaxy A8 (2018) which we saw a long while back. It was one of the powerful processor we came across on a mid-tier smartphone. But for some reason, the one we find in M20 feels a bit under powered. Before we head into that, let’s talk about the good thing. The phone handles day to day task really well – all thanks to the 7885 processor and 4GB RAM coupled with it. Jumping between application like Social Networks and other app like Spotify, Netflix and sorts were pretty smooth and nothing to complain. 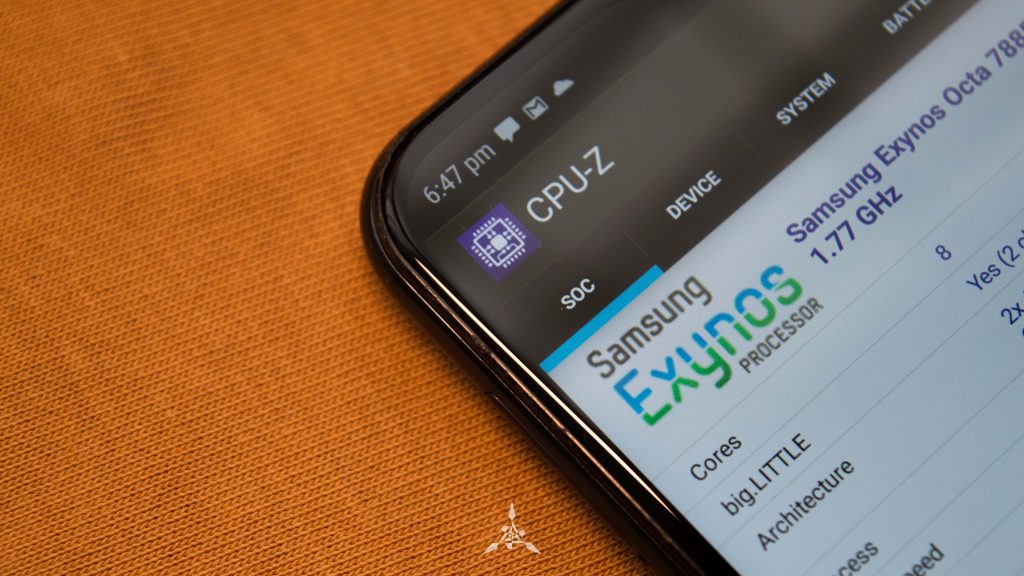 Now games on the other hand, I wouldn’t say it ran the best but it was definitely playable at Medium Settings. So, it handles pretty well. During our time using it as a daily driver, the M20 did feel like it struggled a bit to keep up over time. Especially playing games on it and multitasking across apps. But I hope it can be fixed with a help of an update.

The M20 has a humongous 5000 mAh battery under the hood, which means that you will be having a good time with the phone. The battery has the capability to last for up to 2 days with 4G turned on and a moderate amount of usage. On standby with us just using it for hotspot purposes, the phone still managed to pull a day and a half worth of battery which is pretty impressive as Wifi Hotspot does burn the battery by a lot. The phone has the capability to give screen on time more than 7 hours which is just splendid. As for charging, the phone does support fast charging but Samsung passed us the phone without the proprietary charger that comes with the M20. So, we tested with one of our Samsung Adaptive Fast Charging adapter and it took about 2 hours to get from 20-100 percent. Which is pretty impressive. 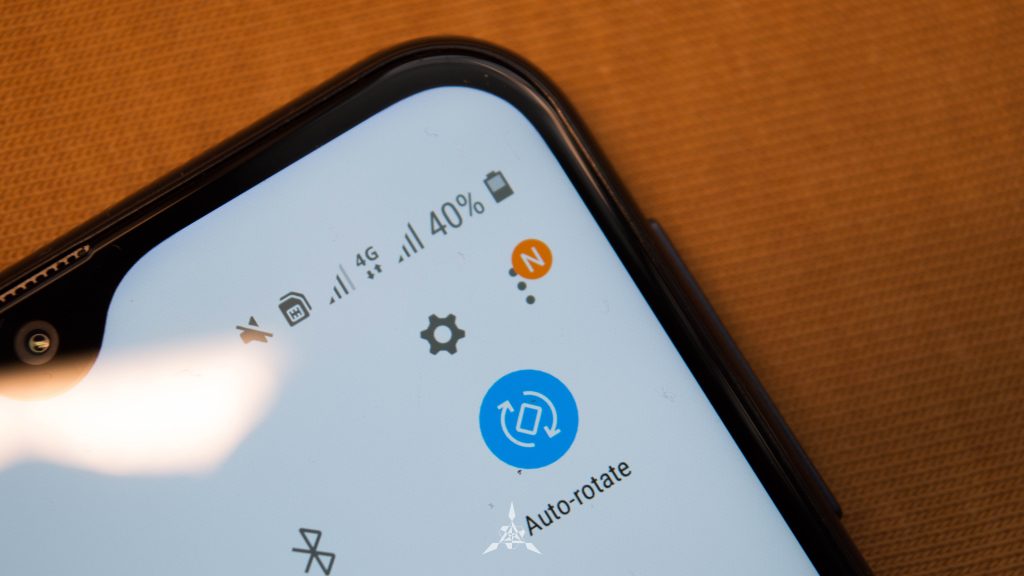 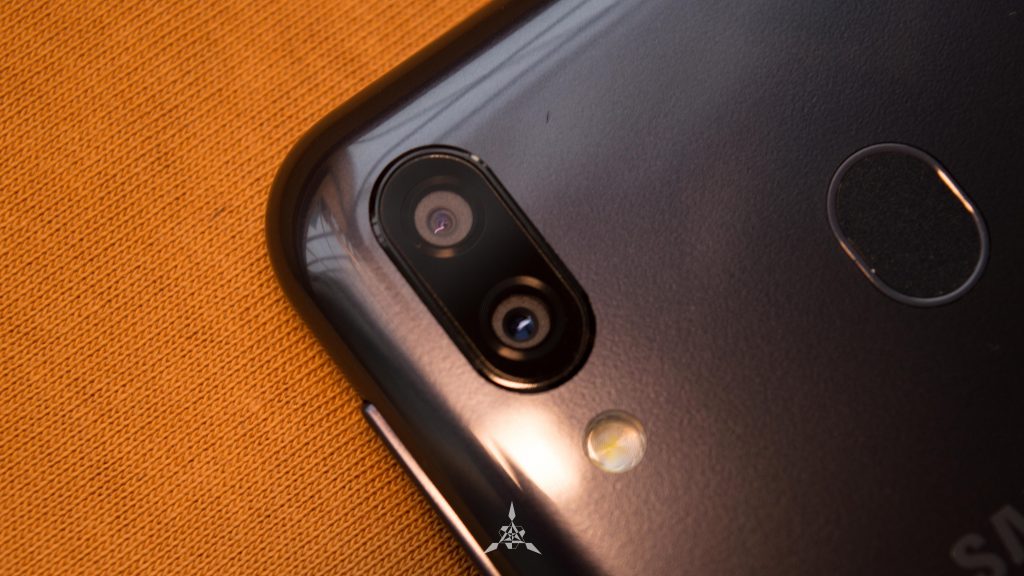 On the back, the M20 boasts a 13MP Primary Camera with an aperture of f/1.9 and a 5MP 120 degree wide angle camera with an aperture of f/2.2 respectively. The camera do not have any OIS but it does have a Monotone flash behind which is nice. We took few shots and noticed that the 13MP camera has enough potential to take some good shots. The lighting were well balanced and the colors are punchy and sharp. Under low light, it does struggle a lot but other than that, it takes decent pictures. The 5MP sensor on the other hand does capture nice picture but the colors are way too saturated and looks too rich. It’s something that not a lot of pixel peepers would enjoy but honestly, having a 5MP Wide angle sensor is way better than having a depth sensor which is pretty much a dead weight. 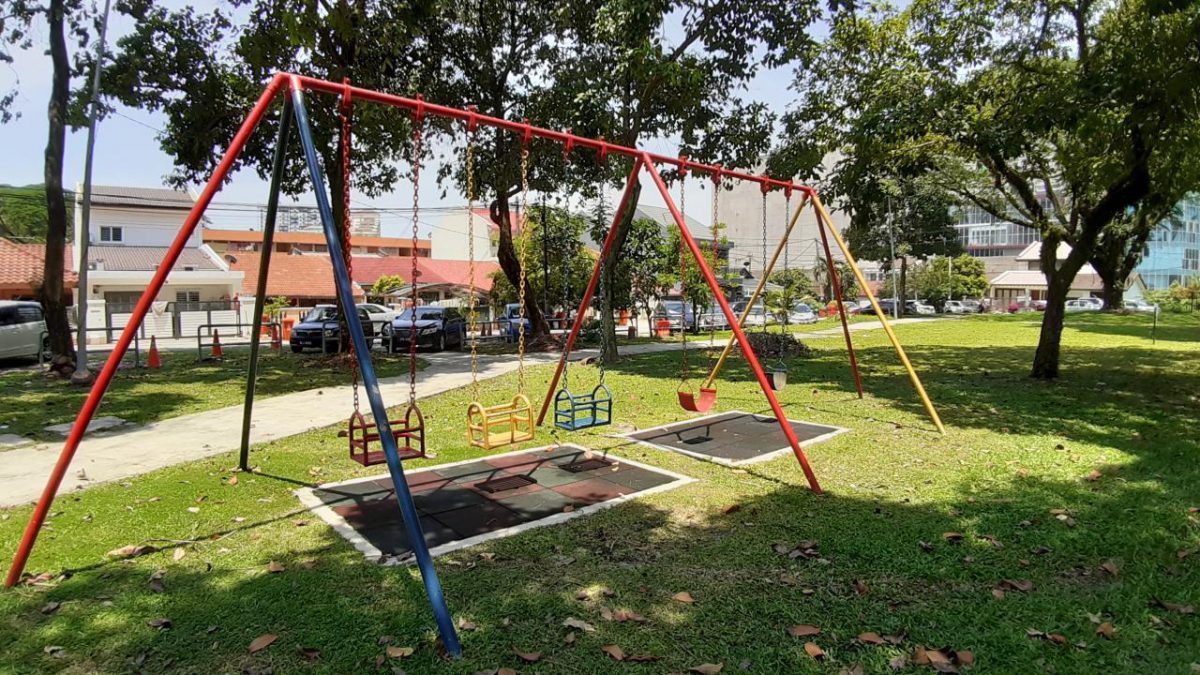 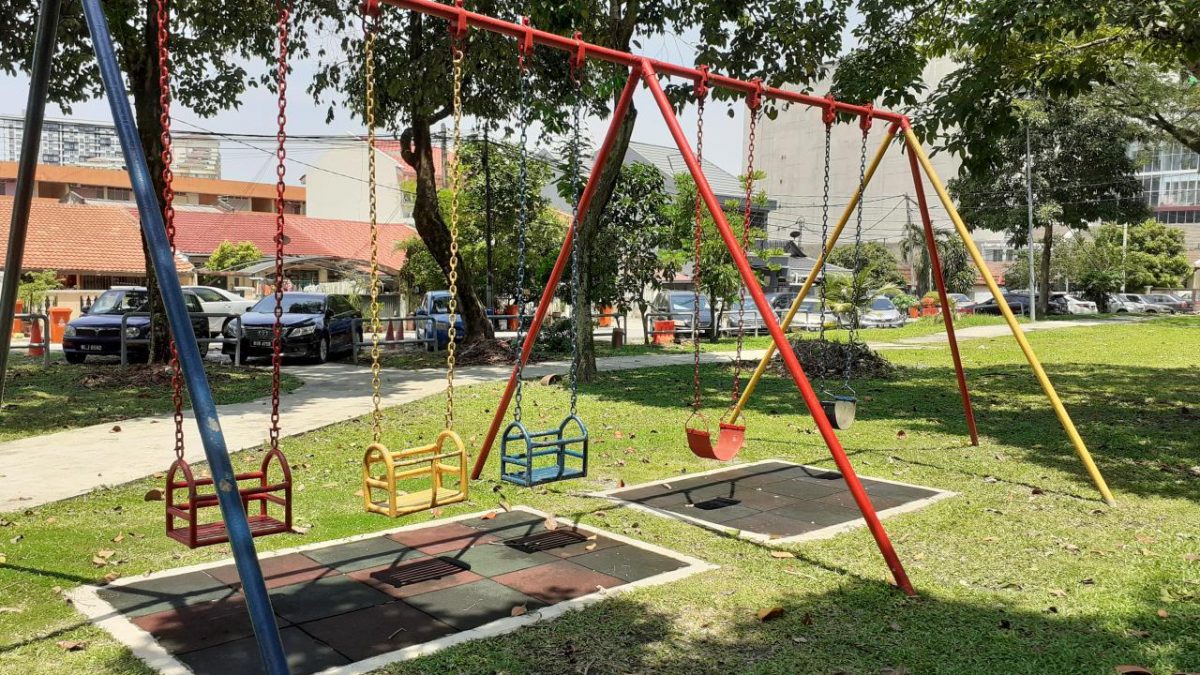 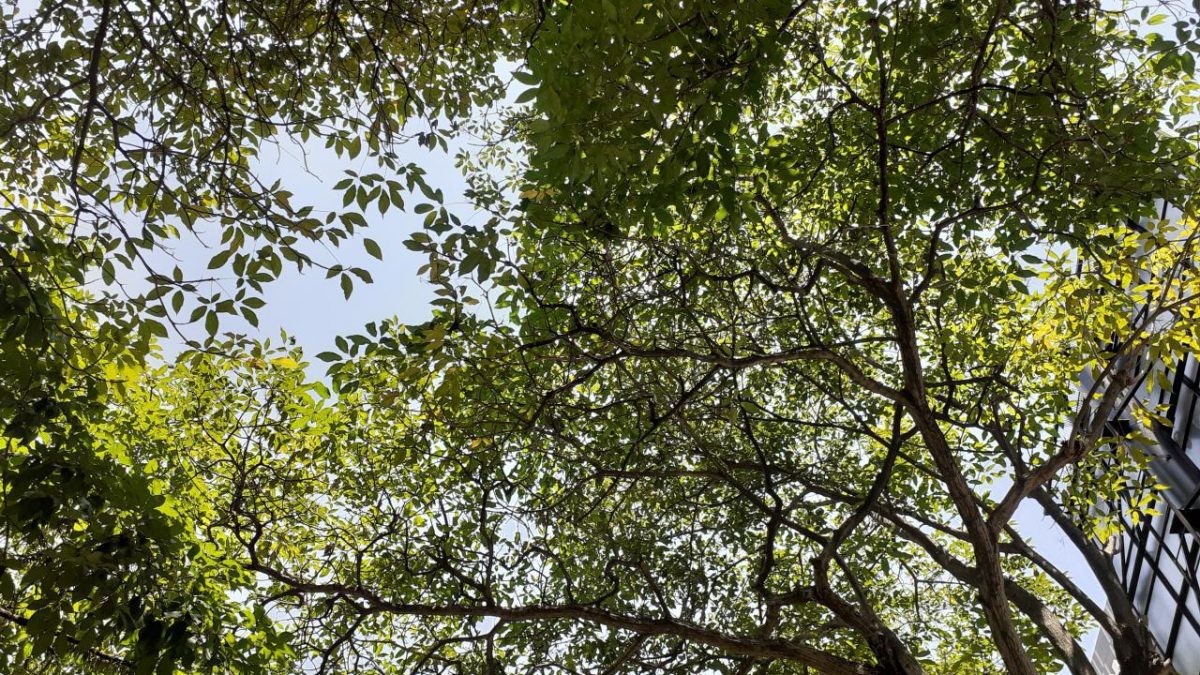 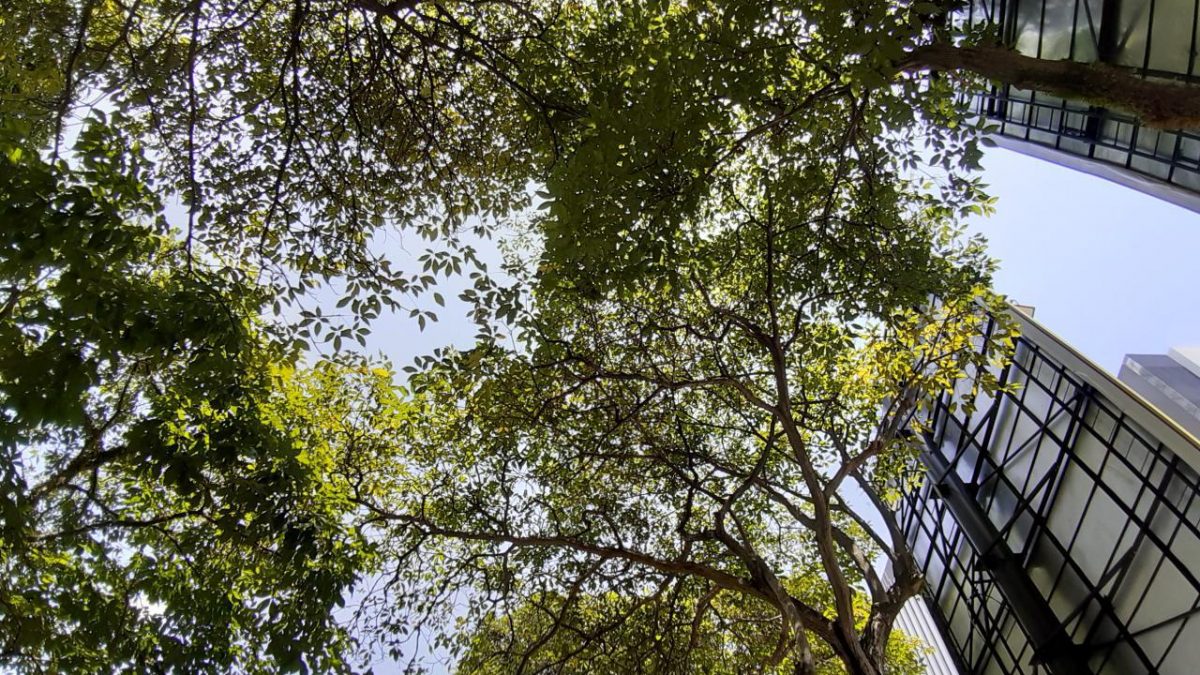 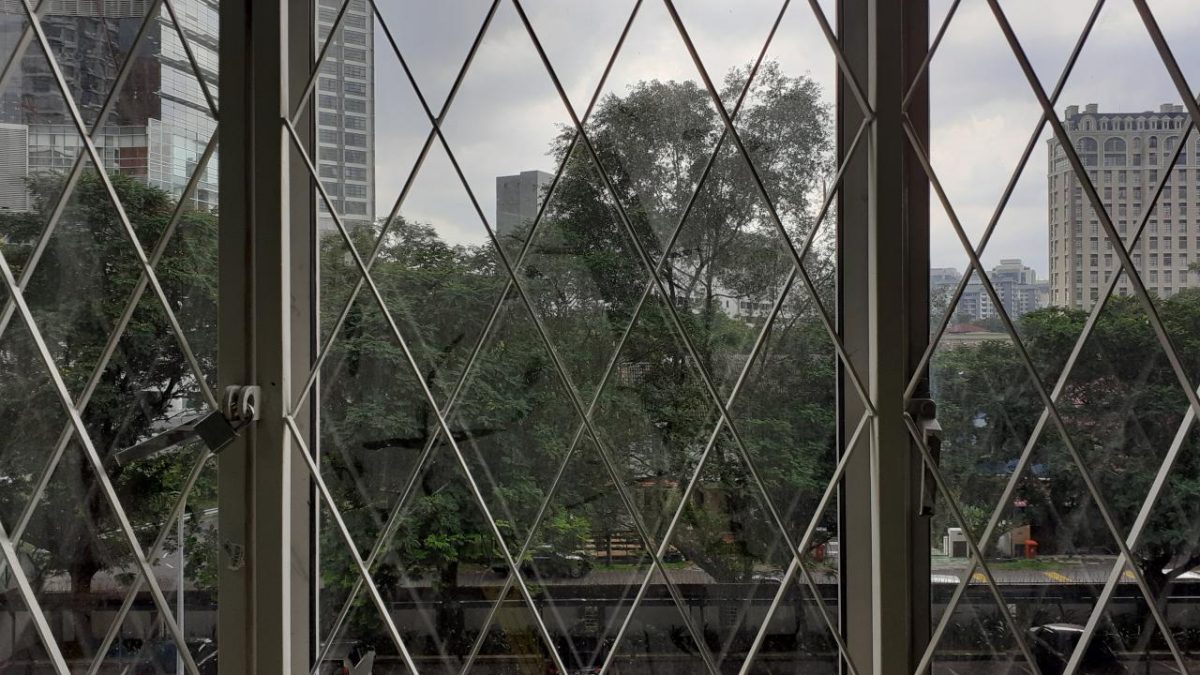 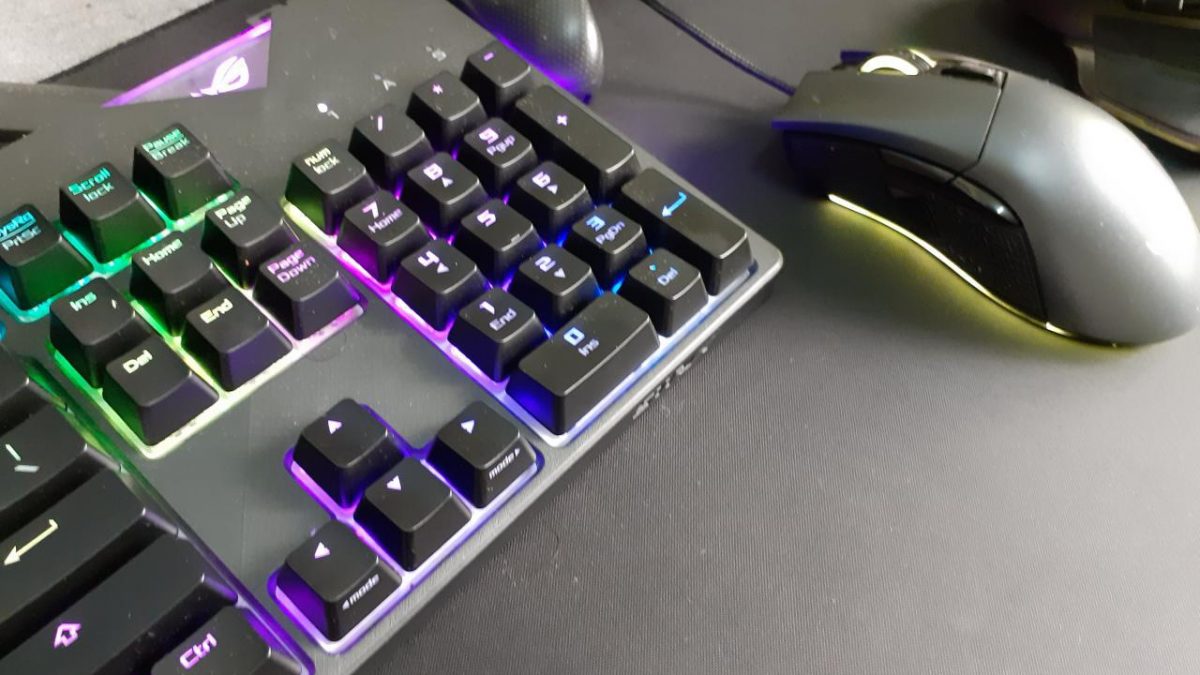 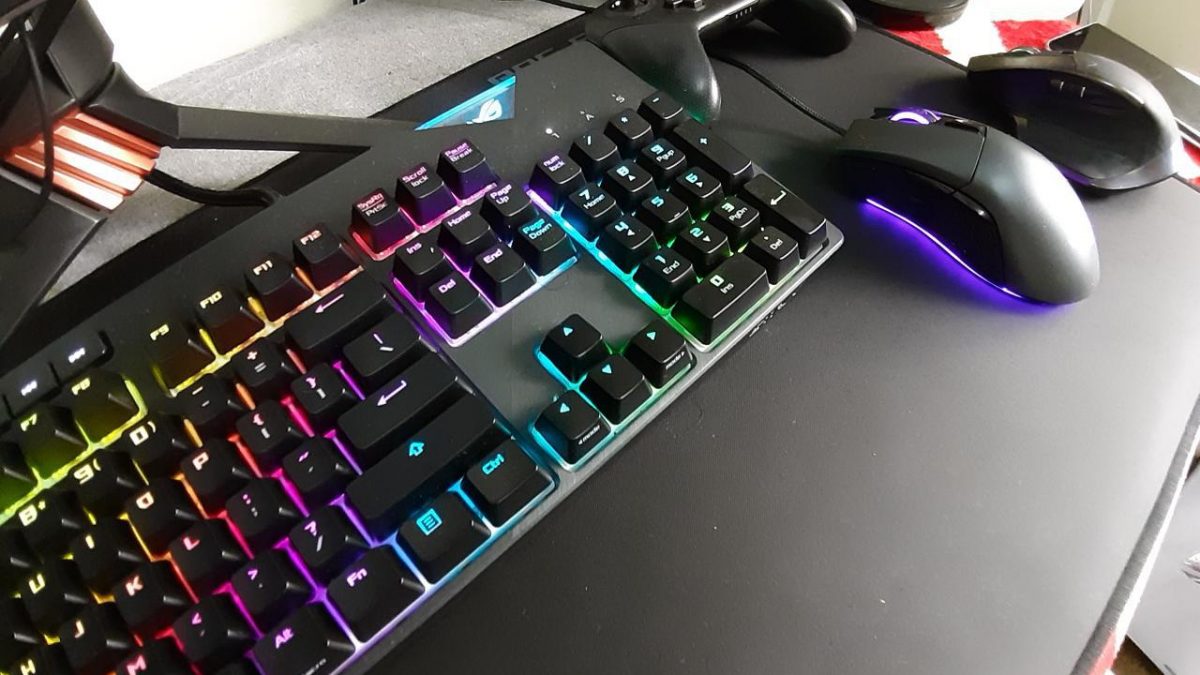 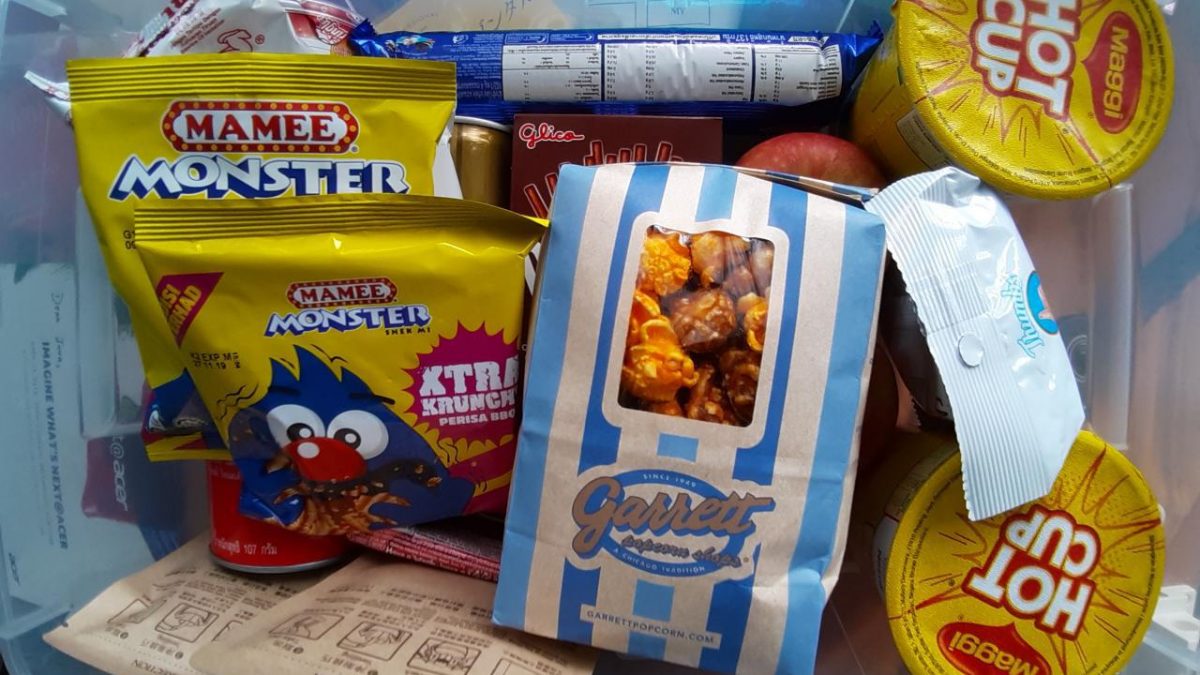 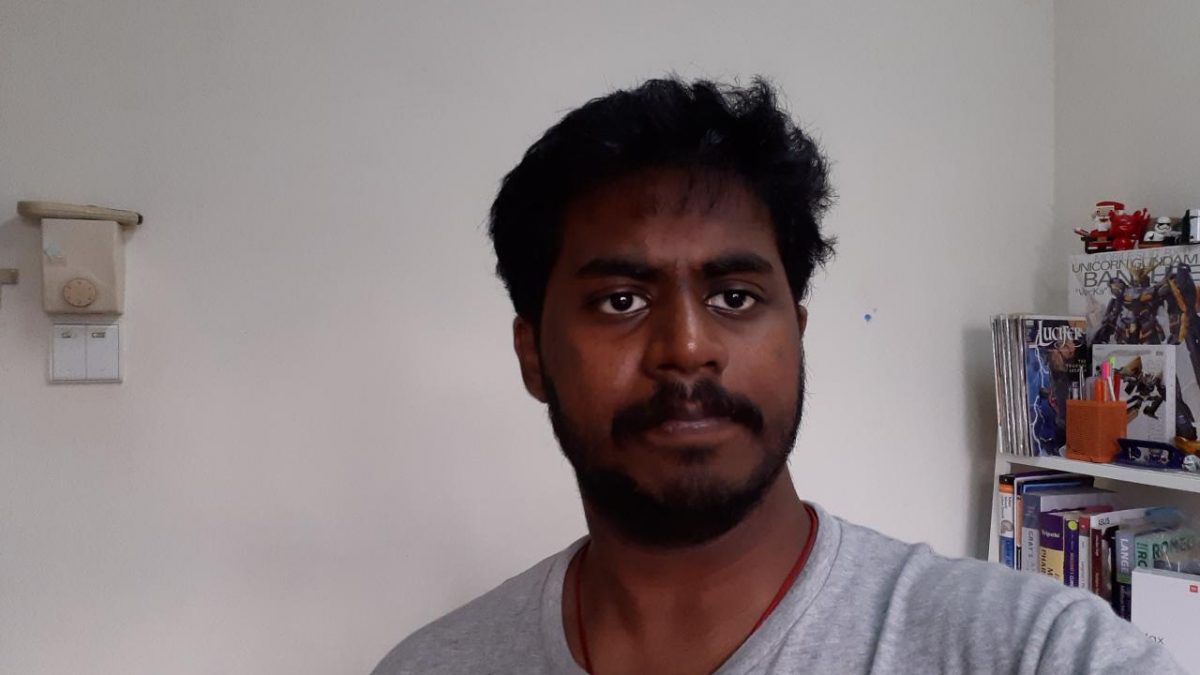 The front facing camera, it’s an 8MP Sensor with an aperture of f/2.0. Coming from a Galaxy Note8 and other flagship devices that balances the exposure for a darker complexion, the mid-tier phones really need a lot of work in this particular department as it blows the exposure way too much, making the picture unusable. But other than that, it works alright. 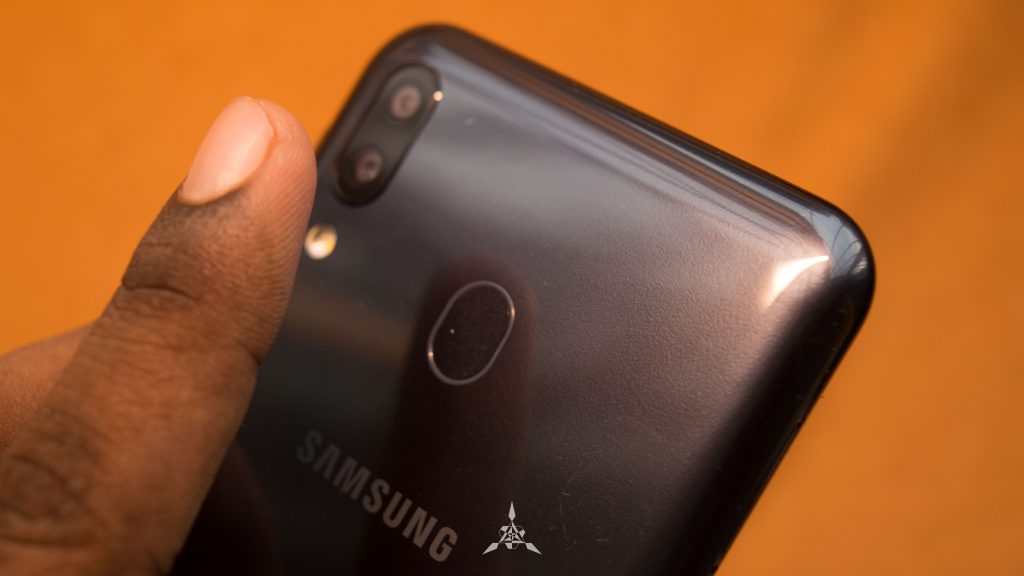 The speaker in the M20 is a downward firing speaker that gets pretty loud and clear. I am very sure that you wont miss any calls or message when you are in a crowd. But one thing that disappoints me when it comes to the M20 is the fact that the vibration feedback is completely absent. So, for those who likes to type with some feedback or to any tap for that matter, it isn’t satisfying. This is just me nitpicking but yeah. As for security, the M20 has a fingerprint sensor on the back that unlocks pretty quick with no issue. It also has a Facial recognition unlock where it uses the camera instead.

The M20 runs Samsung Experience 9.5 under the hood with Android 8.1. Samsung Experience is the previous generation of Samsung UI, which is now replaced with One UI. The M20 does have One UI but it looks like it will be available in an upcoming update. The UI is a lot cleaner and nice to use. It does have some extra features like Bluelight Filter where it protects you from harmful blue light at night and so much more.

The Samsung Galaxy M20 is a mid-tier phone worth considering because for RM 799 not only you get a phone that works but also a camera that takes decent pictures, a whopping 5000 mAh battery that just seals the deal. With too many competition in the mid-tier price segment, especially when we have brands like Xiaomi, RealMe and so on, the M20 sure does stand a chance and offers something the rest don’t – impressive battery life.

There are aspects where the phone needs a bit of tweaking, but its something a software update can definitely fix.