Okay seriously, where to start with this review. Last year wasn’t only known for notches but it was the same year where gaming smartphones became a thing. Fast forward to today, we still see successors to the previous generation and what it looks like – ASUS Republic of Gamers isn’t holding back at all. They have unveiled their successor – the ROG Phone II which is – right out of the bat, has specification that’s too much to handle but for the hefty price tag, is it worth picking up? Here’s our final verdict on the ROG Phone II.

Coming across devices that isn’t afraid to look different is hard these days because almost everyone is opting in for the Aurora like color design which we are genuinely bored of. Good thing the ROG Phone stands out because it has a visually appealing design that gets heads turned from every side of a room. Just like last year’s ROG Phone, which was heavily inspired by Tactical Knife, the new ROG Phone II carries the same DNA with a little extra to it. The device is definitely longer than the last generation and other than that, there’s much changes going on. Just some extra design cues with rainbow hue as you shift the light on the Republic of Gamers text and the angular lines across the device.

As for the build quality, ASUS has yet again done an outstanding job – the body is solid and without a doubt, a heavy phone as well. That said, the phone does require two hands to use because it’s a big phone. On the back and the front, it’s covered in Corning Gorilla Glass, which keeps the device a little safe. To go along with that, ASUS has included an Aero Case – which is definitely a one of a kind case we have come across so far. The device feels a lot refined over its predecessor with smoothened edges and a much more well put together feel going on – I like it.

Get ready for this because this is possibly the beefiest specs we have ever seen for this year. Under the hood, the device packs a Qualcomm Snapdragon 855+, the latest processor coupled with 12GB RAM and a storage configuration of 512GB or 1TB. This is pretty absurd because it’s definitely an overkill smartphone we are talking about. We benchmarked the device with Antutu, Geekbench and AIDA64 to verify the scores. There are two sets of benchmarks, one of it was done without the X Mode and as for the higher score, it’s obviously with the X Mode turned on.

In terms of performance, there’s nothing much to talk about because this device can handle anything you throw at it with no issues at all. Multitasking on this device is truly a breeze and being able to jump across games is even possible, all thanks to the 12GB RAM under the hood. Speaking of games, we had enough gaming sessions with this smartphone to let you know that the phone can handle all the games at Ultra setting – that includes PUBG, COD Mobile, Asphalt: 9 and few other titles as well. Now over a long hour of gaming session, the phone does get a little toasty on the metal rails which is something. The included AeroActive Cooler doesn’t seem to have any impact on cooling the device, but it does very minimal effect in dissipating the heat.

But overall, a wonderful experience indeed.

On the front of the device, we are looking at a 6.59” FHD+ AMOLED Display covered in Corning Gorilla Glass. Now there’s a lot to talk about the display because it packs too many technical things that needs to be addressed. Starting off with the good part, the display takes a leap in the refresh rate department – now capable of hitting 120Hz. This is possibly the highest refresh rate we have seen on a smartphone and if you think 90Hz is smooth, toggling to 120Hz is very much buttery smooth – just like sliding on a hot pan.

Every swipe and every tap on text bubbles or even at the simplest task – your eyes will just appreciate how slick the motion is. Now you might be wondering, oh – so games will run at 120Hz! Well, not quite because there isn’t a lot of games that supports 120Hz. We tried Asphalt 9 because ROG has exclusively partnered up with Gameloft to offer cool skins and the game hits 90 fps, and I have to say, I truly enjoyed it – it felt as if I was holding a pro-grade handheld console. Once you go 90/120Hz, you can never go back. 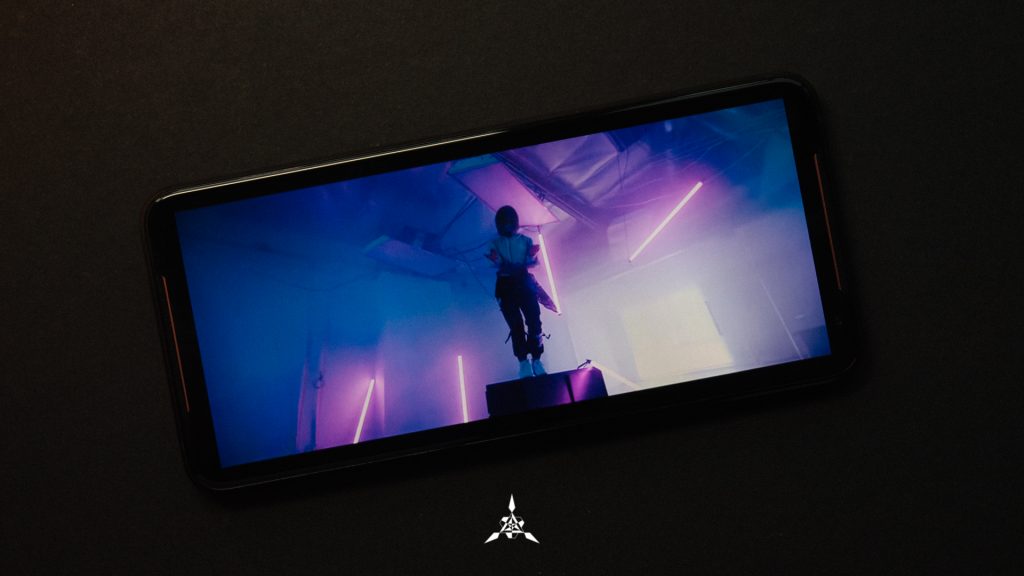 The second thing about the display is that they have opted in for the best color accurate displays with DCI-P3 Color Gamut with Delta E<1. Now, I have had a fair share of experience with good color accurate displays, especially from ASUS ProArt lineup which is truly an eyegasm. The colors on the ROG Phone II doesn’t reflect the paper. Its good but isn’t as accurate as I thought it would be. The brightness is great under bright light but under low light, especially when I check my notification the moment I get up, it shines brighter than my future. Really want this part to be fixed and there’s the odd flickering as you tap the under-glass fingerprint sensor – not sure what’s up with that but just thought I should let you know.

Coming from a phone that has a horrible battery life, the ROG Phone II is hands down the love of my life because with that 6000mAh battery, it just got me going without worrying about having a battery bank – I swear to god. We did two different tests for the battery – one at 120Hz and the other at 60Hz, because high refresh rates does affect the battery. Just as we suspected, it did.

Starting with the 60Hz – we had an active usage time of 16 Hours and with that, we managed to get about 5 hours’ worth of screen on time with 25% battery left. The 120Hz on the other hand, we managed to push it to 16 hours of active time, and with a screen on time of 6 hours and 29 minutes. Now if you are a light user, expect the phone to last two days with no issues at all. In my use case, I did use the phone heavily and I definitely need to charge it every night before I hit the hay.

Speaking of charging, ASUS has included a 30W HyperCharge Adapter inside the box and it can charge the device to 100% in about 1 hour and 30 minutes + with no problem. You don’t have to worry about battery at all. More time in your hands than more time connected to a cable.

The ROG Phone II has a dual camera on the back – a 48MP Sony Sensor and a secondary 13MP Wide Angle camera. Sure, while it may not be the best camera in the market, I personally think that the phone still takes great shots with no issues. The colors on the primary sensors were nice to look whereas the Ultrawide angle camera has a very dull color. It does have a limited Dynamic Range, but honestly speaking – you will be fine with the pictures, with a little tinkering and also, post it straight on to your socials. Some of the pictures we posted on our Instagram was shot with the ROG Phone II with a little touch up, it’s a good camera. It does suffer a lot under low light but that can be fixed with the help of a software update. 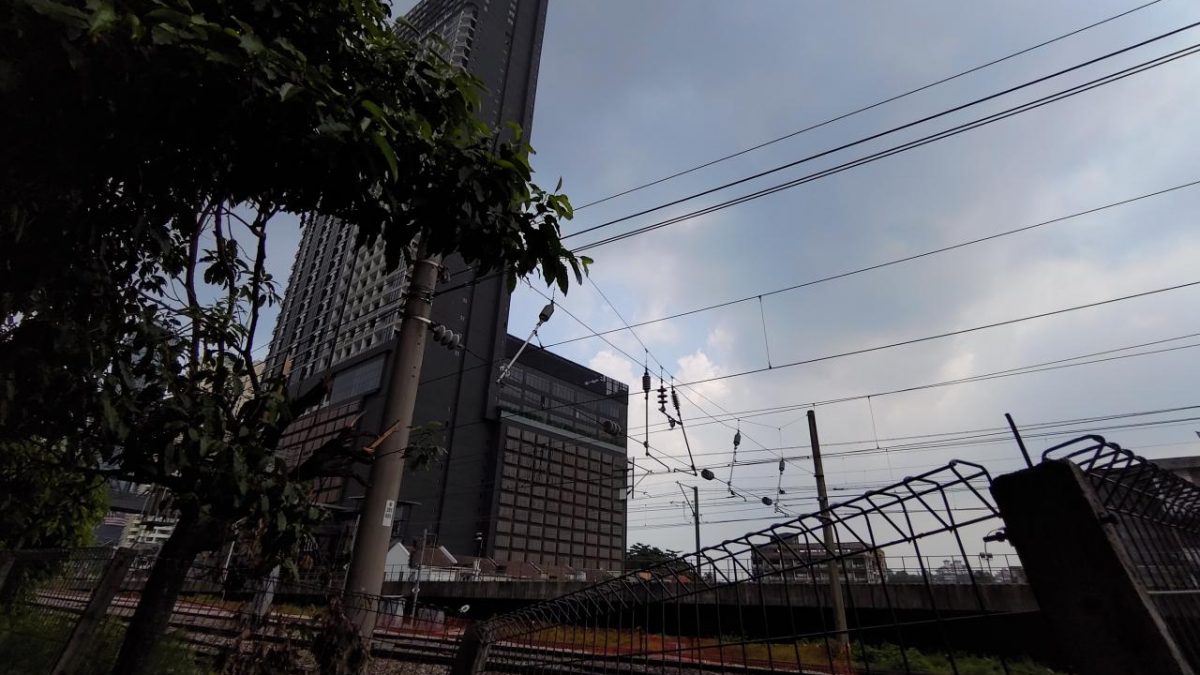 On the front, the phone houses a 24MP camera that I think needs a lot of work. During my time, I didn’t take much selfies but our skins in this picture is so smooth, as if beautify mode was turned on – this needs to be changed y’all. There are missing details but other than that, there are times you can get good pictures under good lighting – just that I am not a fan of the beautification thing going on, which I wish I had the option to turn it off.

The speakers on the ROG Phone II deserves the attention because this is one of the rarest phones in the market to still feature a true dual stereo front facing speaker that makes any kind of audio experience a worthy one. Listening to music, watch shows on Netflix and even playing games with these speakers – it’s amazing with rich sound quality and immersive feel, thanks to the DTS X Ultra support. Hands down the best speaker on a smartphone today.

ASUS went for a cleaner UI experience; it runs Zen UI on top of Android 9. With that said, the last ROG Phone came with this over the top gamer-y icon and wallpaper that made it look absolutely bonkers. I wasn’t a fan of it and thanks to ASUS, they have included an option where you can either choose a pure stock android experience over the gamer-y look – now that is amazing. The only two app that comes pre-loaded into the device is Armoury Crate and Data Transfer.

The Armoury Crate is an app that makes the gaming phone, what it called. This allows you to control game’s performance, the RGB Logo on the back, setup your AirTriggers – which is now much improved at the moment and even overclock your CPU with the help of X Mode. There’s a lot of things to play with and it’s fun. Overall, a clean experience indeed.

Let’s face it – Gaming Smartphones are here to stay and since that’s the case, might as well make the best out of it. We have seen so many contenders unveiling their Gaming Smartphones to put up a good competition but what’s interesting is that, the ROG Phone II remains as the perfect benchmark and holds the throne for being the most appealing Gaming Phone in the market – I can strongly say this because it definitely got a lot of heads turning during my time using it.

The ROG Phone II comes in Elite, which is coupled with a 512GB Storage for RM 3,499 and the Ultimate Edition comes with a terabyte of storage and it’s priced at RM 4,499. For what its priced, you are definitely getting solid specification for every penny you pay.

We at The Adventures of Vesper give the ROG Phone II – the Gold Award for offering ultimate performance for the money.

Prices Of The New Apple Watch Series 5 In Malaysia Revealed; Starting From RM1749

The all-new Nokia 6.1 is Now in Malaysia!

A Closer Look at the Upcoming HONOR 9X Pro: It feels Good

Hold Your Horses! The God Of War Limited Edition PS4 Pro is Happening!