If there’s one thing I am very particular about is the pair of headphones I choose to use. Wired headphones have played a huge role in my life and I am sure everyone else can relate to this. I carry a 3.5mm Headphone and a USB-C Headphone just to make sure I can still listen to music on a phone with no headphone jack as well. This is where things got a little interesting.

Ever since Samsung ditched the Headphone Jack on their phone and included a USB-C AKG Headphones, I still wanted to resort to my HTC U Sonic Headphones but it didn’t work. In fact, both my USB-C Wired headphones and my 3.5mm Headphones with a USB-C dongle did not work with any Samsung device – in this case, the Note8, Note10 and S10e. So, I decided to dive a little deeper to find out what’s going on.

USB-C Audio: In a Nutshell

Ever since manufacturers ditched the Headphone jack on their devices, this has been a very frustrating move – especially on the consumer end because people had to splurge in for a Bluetooth headphone. But certain smartphone manufacturers were kind enough to include a 3.5mm to USB-C dongles, which did save a lot from spending money. But brands like Samsung in this case included an AKG USB-C Headphones instead, which does save the trouble of getting a new headphone but there’s no versatility – users can no longer use a different headphone, which they prefer.

So, third party dongles from various brands were the only way out. This was a complete surprise for us because none of the dongles worked with any of the Samsung devices – we tested with the S10e, Note10+ and the Note8. Why is that so? Let’s break down the included AKG Headphones that comes inside the box.

These aren’t your average USB-C Headphones because, the moment you connect them – Samsung devices will prompt you to update the headphones. This was our first hint. We tried connecting our HTC U Sonic and that did not get detected at all. The Samsung AKG USB-C Headphones have something that drives the device to push the audio: A Digital-to-Analog Converter, also known as DAC. You may have heard the term from popular brands like Fiio, Creative, Sony and the list goes on. These AKG USB-C Headphones comes with an Ultra High-Quality DAC that converts the pure digital signal into analog for the audio output.

In fact, Samsung has a USB-C Dongle in stores (not available in Malaysia), which comes with an DAC built right into the USB-C port to drive the audio at 24bit rate.

Why the need for such Special Dongles?

Good thing you asked. USB based Audio is focused on offering digital audio, that’s why we have DACs and Amplifier like the Fiio Q1 to make that work. This allows to the DAC to convert the digital signals into analog to retain the quality as much as possible. Generally, manufacturers would include a DAC built right inside a headphone, which clearly what Samsung did with the dongle and their very own wired headphones. In most cases, other manufacturers include DAC built right into the device itself, which is a little confusing because

Why didn’t Samsung do that instead?

On the side note, the phone does pack a speaker and an earpiece to output audio. In order to do that, it definitely should have some DAC to do so. It could probably be a simple DAC of sorts. The answer to the story could be more towards the processor or the DAC itself.  Problem is, there isn’t any article answering this question.

Here’s the best part – Devices powered by Qualcomm Snapdragon has built in DAC and to prove this, we used the following devices:

These devices have the potential to push audio at 24bit/192 kHz. That’s why the dongles that come with those devices are very basic and has the potential to push analog audio with no trouble, including the ability to use your own pair of headphones with any dongle is possible. We took a deeper dive into the processors specification comparing the Snapdragon 855.

In terms of specification, in relation to the Exynos 9825 – there isn’t enough information to begin with and all we could find is – shallow specification on the processor itself. Now moving on to the Qualcomm side of things, we picked Snapdragon 855. Qualcomm has been heavily investing on audio with smartphones and they have features like Qualcomm AptX and so on – but theres a catch, it only works wirelessly. Which brings to our last resort, Qualcomm Aqstic.

Qualcomm Aqstic is an audio platform that comes with audio codecs, DACs and more. The end goal is to offer the best in class audio quality possible. In fact, Qualcomm Snapdragon 855 is one of the processors, to support both Aqstic and Aqstic Voice UI, which helps in always-on and always-listening capabilities – pretty much how your Google responds to everytime you say the magic word. On top of that, it has support for MPEG-H 3D Audio and once again, the list goes on. This could probably the reason why the audio works normally with an analog dongle – but again, that’s a long shot.

We will dive deeper soon in the voyage of audio real soon but for now, let’s get this question out of the way – How am I supposed to listen with my Note10 with a wired headphones?

Truth be told – it sucks because not only you have to only rely on the headphone that’s included inside the box and to make matters worse, the official dongle that’s sold on Samsung isn’t even available in Malaysia. We reached out to our friends at Samsung Malaysia and checked out the Samsung Stores, they do not sell the dongle in Malaysia. Is it the end of the world? Lucky you, we ended up spending a lot of money to find which dongle you should get – but get ready, these dongles are not cheap.

Supported and Recommended USB-C Dongles for your Samsung Device 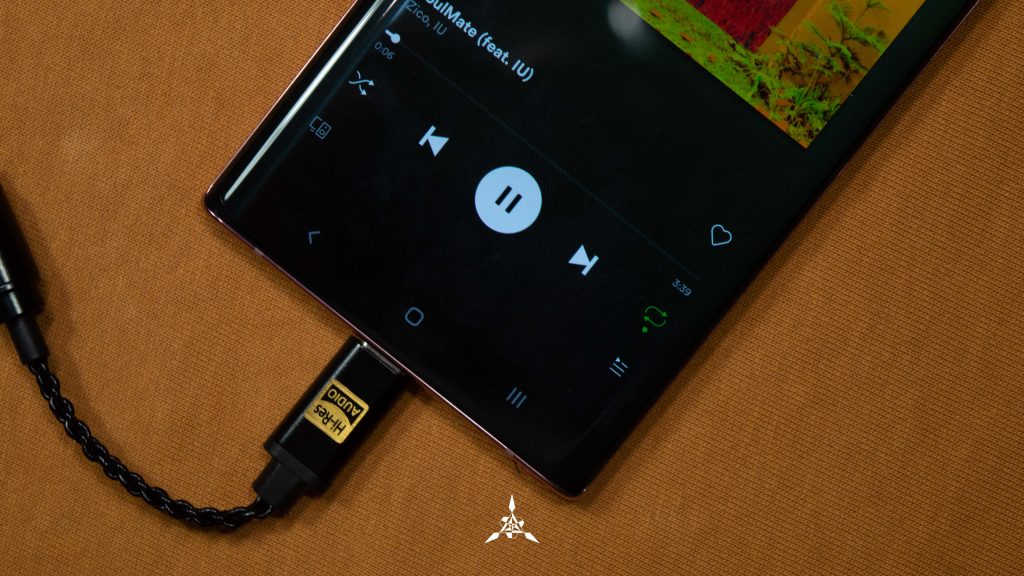 We got our hands on two dongles – our favorite is none other than the Sonata HD Type-C DAC. TempoTec has manufactured one of the best dongles, money can buy. It’s a nice USB-C to 3.5mm dongle and they are generous enough to include a USB-C-to-A Adapter, so that users can have the option to use the DAC with their desktops or laptops for that matter. It works flawlessly. The audio quality is literally the cleanest among the bunch and the dongle can give a darn loud sound output which is great.

If the Sonata HD is on the pricey side, Hillaudio, a Malaysian local store offers Type-C dongles with DAC built into it for a good price. We tried the Hillaudio Type-C Realtek DAC to see how it is and the sound is definitely a little softer than Sonata HD but it’s a 32bit based DAC which is real neat and the quality is as almost on par with Sonata HD which is real cool. The Conexant variant is a 24bit based and it’s much louder according to the folks over there.

They do have a cheaper DAC based dongle which is around RM 20 which you can – of course get, but if you want to enjoy a good sound quality, better settle for the best and spending a little extra is always worth it. If you are expecting to hear top notch quality on Spotify with these DACs, you just won’t. Buy a FLAC audio from Tidal perhaps and experience the sound, it’s two worlds apart. If you are willing to go all in for wireless headphones, check out our recent Valentine’s Day guide which is still relevant, if you ask me.

Disclaimer: The products other than the Samsung Galaxy Note10 was purchased in order to make this content happen. Let us know if you want us to review any of these. Huge thanks to Samsung Malaysia for giving us the Galaxy Note10 for us to review and to make this content happen. Huge shoutout to folks over at Hillaudio for being kind and amazing. Check out their store. Check out SoundGuys article on the whole USB audio – very technical.