Bucking the trend of declining demand and diminishing sales of DRAM in 2019 when consumer and industrial demands have shrunk, Kingston emerged at the top for third-party DRAM module suppliers globally to maintain their reign of the position for 17 consecutive years. 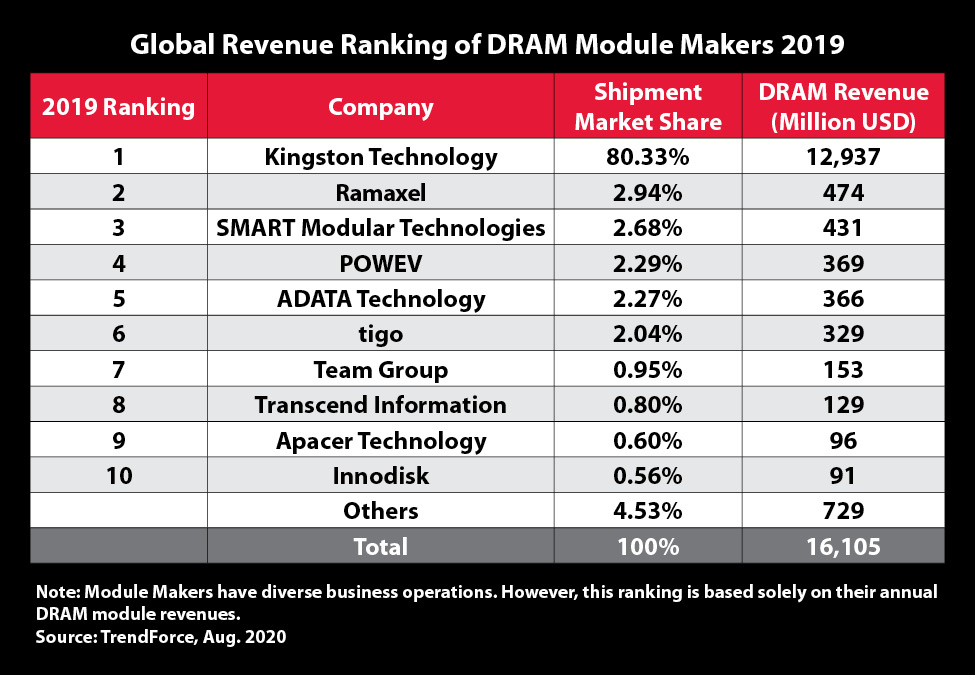 According to TrendForce, Kingston achieved an 80.33% shipment market share of DRAM modules in 2019, giving it a total DRAM Revenue of USD $12.937 Billion, and left its closest competitor far behind at only 2.94% shipment market share. Kingston claimed that their reason of staying top dog is due to their close relationship with its clientele and partners as well as its flexibility and adaptability in the ever-changing market demands.

Kingston also states their readiness to deliver on the transition from 8Gbit density DDR4 chips to 16Gbit, which not only promises power savings that will cut down on battery consumption on mobile devices and reducing running costs at data centres but also increasing the capacity per module. Kingston began shipping 64GB Registered DIMMs since December 2019 and refreshed their Server Premier line-up to feature 16Gbit.

Kingston says that they will continue working closely with their partners and customers by providing assistance and address concerns on compatibility of new higher-density chips with legacy platforms. The company claims that the new advancements will boost the growth of cloud computing, edge data centres as well as 5G networking.

Kingston Refreshes the Canvas Card Series and MobileLite Plus Readers