Laptops in general has always shared pretty much the same overalls and these days it’s a necessary step to take to make the next generation of laptop stand apart and importantly perform well too. Productivity centric laptops does fall short in certain aspect due to the lack of power and performance due to the thin and light profile. That days are over because with the new 11th Generation Intel processors coupled with Iris Xe or even NVIDIA GeForce GTX – all that in a small form factor is very much possible. Say hello to the new MSI Modern and Prestige. 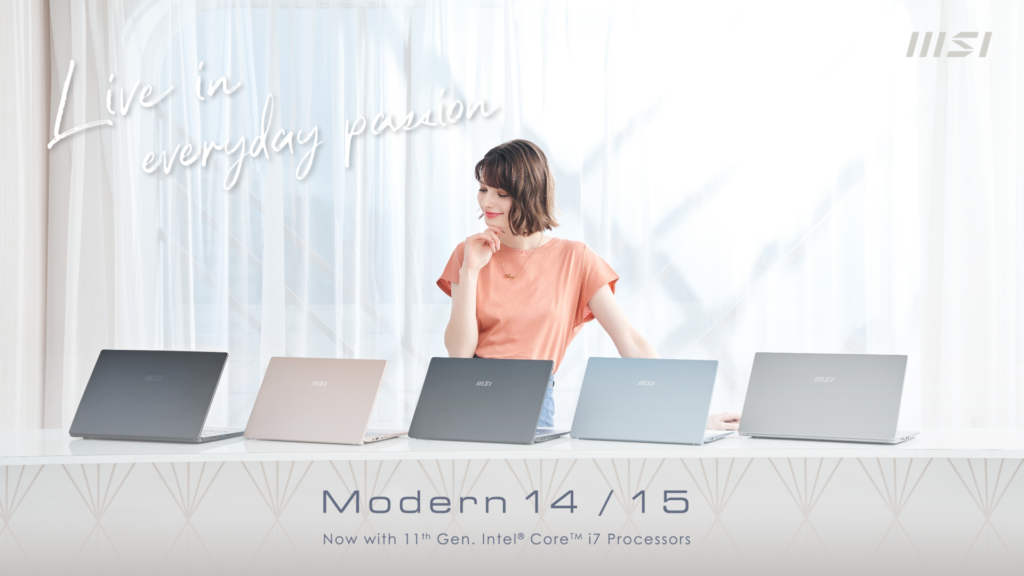 The MSI Modern is for those who want a very productivity centric laptop with colors that blends with their persona. It comes with up to 5 different colors – with the Modern 15 touting the Carbon Gray and Urban Silver whereas the Modern 14 comes in Bluestone, Beige Mousse and Carbon Gray. Both the laptop comes in a super nice 16.9mm profile and the Modern 14 weighing in at 1.3kg and the Modern 15 coming in at 1.6kg respectively. As they say, the thinner the laptop the fragile it is. But that’s not the case here as it comes certified with MIL-STD-810G. 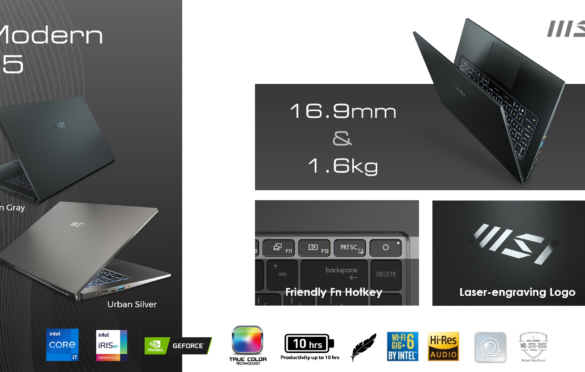 Once you open the lid up, you will be greeted with MSI’s True Color Technology display which offers to the close 100% sRGB color space. You can choose between displays of your liking – either a 15.6” display or a 14” respectively. 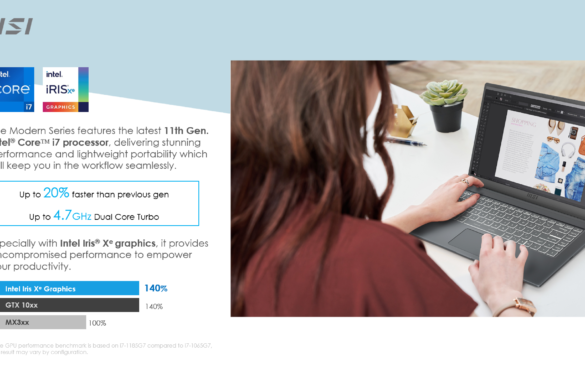 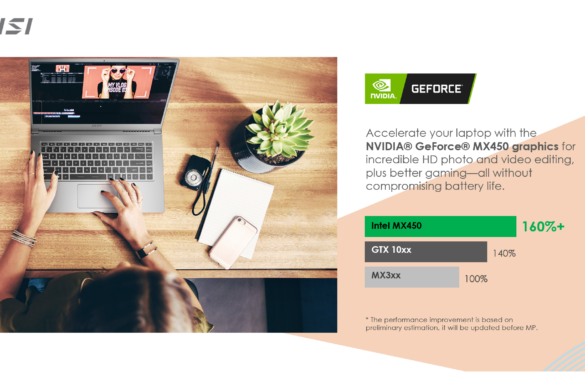 Under the hood, there are specification improvements that only goes along with today’s standard but keeps up with the future needs. Starting off with the processor – where the laptop is powered by the latest 11th Generation Intel Core Processors which is said to offer up to 20% faster performance than previous generation a Turbo clock speed of up to 4.7GHz. Coupled with that is the new Iris Xe which is a much better graphics solution for Ultrabook as compared to the older UHD Graphics. Now, if that isn’t enough and you want a little more power to do the extra mile – well, you are in for a treat with the NVIDIA GeForce MX450. 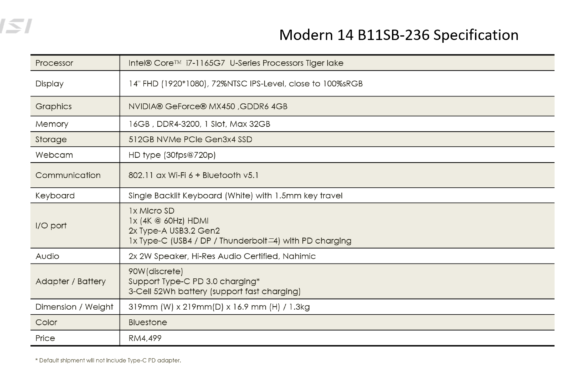 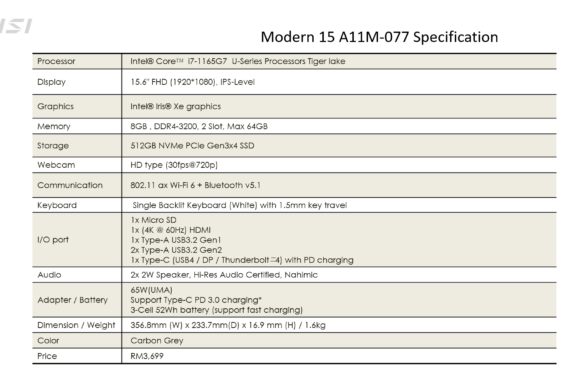 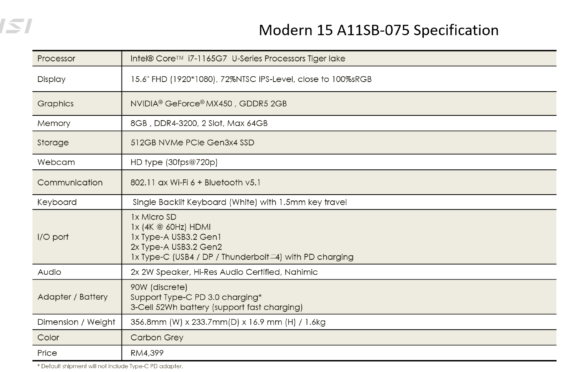 The specification only brings good things to the table such as PCIe Gen 4 SSD Slots and Thunderbolt 4 ports to make faster data transfer and better throughput. Wi-Fi 5 is old news and now the laptop packs the latest Wi-Fi 6 based on 802.11ax offering, 3 times faster speeds. As for the rest, the MSI Modern gets you going with the impressive 10 hours of battery life and even if you forget to charge it when you are back at home, well worry not as it supports fast charging. 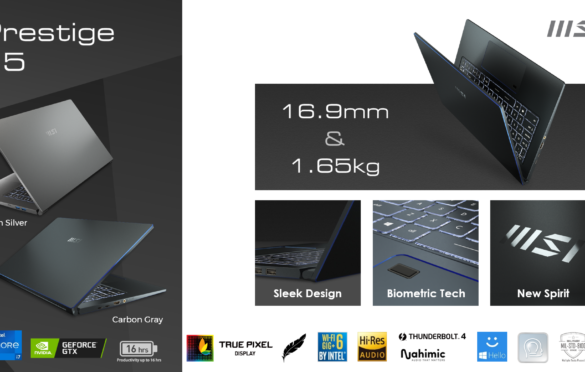 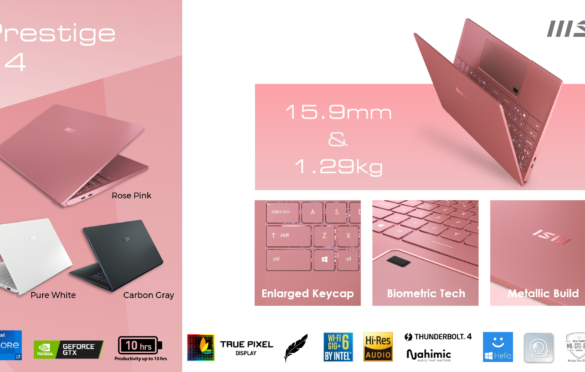 The Prestige takes it up a notch with few things, making it a lot more different from the Modern. This is for those serious-for-those-who-do users with the crème de la crème specification under the thin chassis and it should come off as no surprise that the MSI Prestige comes in 2 different variants – the 15, which has two colors – Urban Silver and Carbon Gray and the 14, which has three colors – Carbon Gray, Pure White and Rose Pink. The display the Prestige houses on its laptop is the True Pixel 4K UHD Panel with the crisp color and sharp images. 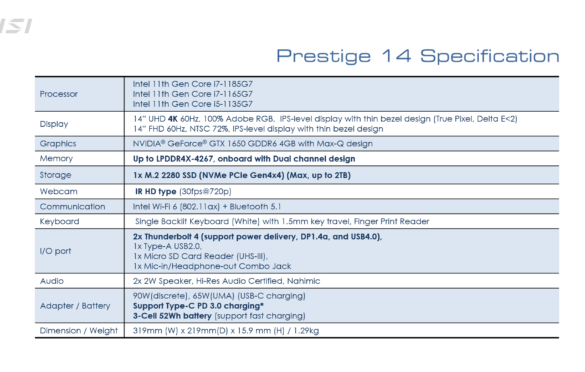 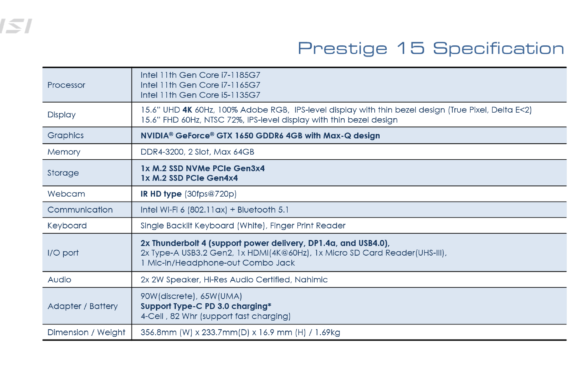 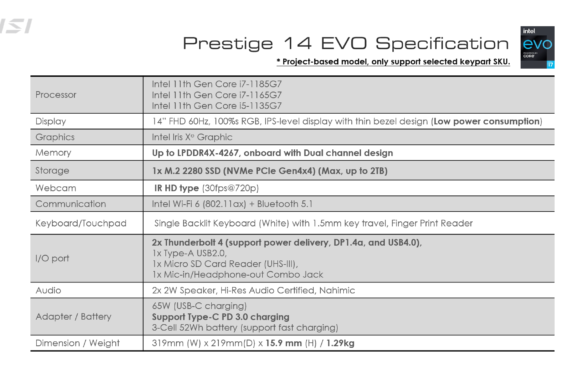 Just like the last Prestige we reviewed here, the New Prestige focuses on content creation in a thin and light machine – paired with the latest 11th Generation Intel Core processor and a choice of GPU – either the Iris Xe or better yet, a proper GTX 1650 under the hood with 4GB GDDR6, respectively. But There is a distinctive difference between the Modern and Prestige because the Prestige has a version that is powered by the crème de la crème of a processor – the Intel Evo Based processor. A specially cherry-picked processor which does faster boot times, impressive speed, and better battery longevity.

These laptops are now made available in the market and its worth considering because MSI has taken the time to make two different series for end-users, that way not only consumers get the number of choices to choose from on the platter but to pick what fits their requirement and needs. Both the Modern and the Prestige has some nice revamping going on – especially with the new MSI logo that gives it the business look that it deserves. That said, you just might be looking at the next laptop for all things – productivity with a punch.

This article is brought to you by MSI Malaysia.

[email protected]: Acer Swift and Spin Gets Antimicrobial Coating and ConceptD 3 comes in a Ezel Variant