It’s no surprise the the ASUS ZenBook Pro Duo took quite the attention when it made its debut at Computex 2019 and it was one of the few laptops that pushed the limits in the consumer segment, at the very same time boasted a price tag that was too good to be true. That said, this year, there’s another refresh and they unveiled the new versions of the ZenBook Duo with improvements that elevates the experience to another level. 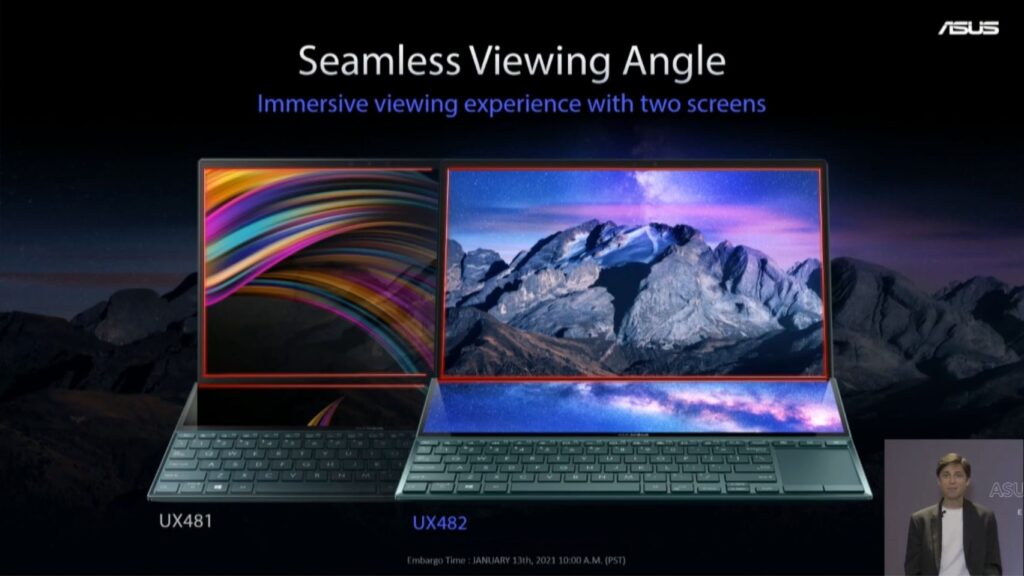 After a year later of its launch, we finally get a newly refreshed ZenBook Pro Duo 15 OLED and the normal Duo with some new improvements under the hood. Starting off with the new Tilting ScreenPad Plus Design which we witnessed with the ROG Zephyrus Duo not too long ago. The inclined second display is now seen in the Pro Duo and the best part is that it also carries of the AAS+ Cooling system and has the Ergolift on the laptop for better incline and user experience as the displays give an illusion as if it flows into one huge display. The incline of the ScreenPad Plus offers a nice viewing angle as opposed to the previous version where it remained flush with the body. They have also bumped up the brightness to 400 nits. 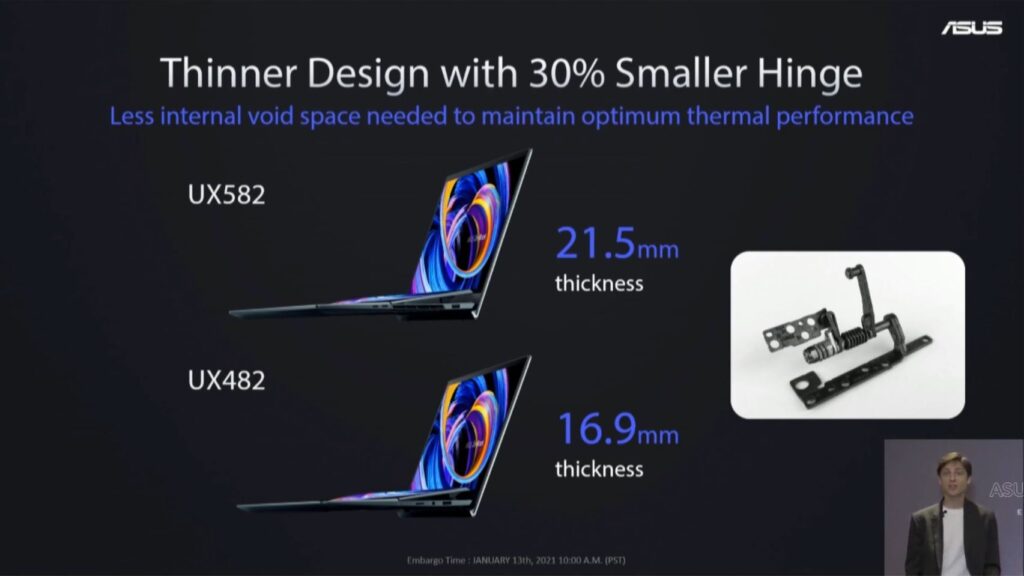 The hinges have been redesigned to make sure that the Ergolift works and lift the ScreenPad Plus display as well. Despite all of that – it still has a thinner design with 30% smaller hinge – creating less internal void space required to maintain the optimum thermal performance. The whole PCB of the laptop has been shaved off by 20%, there’s 28% increase in the battery capacity and finally the laptop is said to give good amount of GPU firepower. 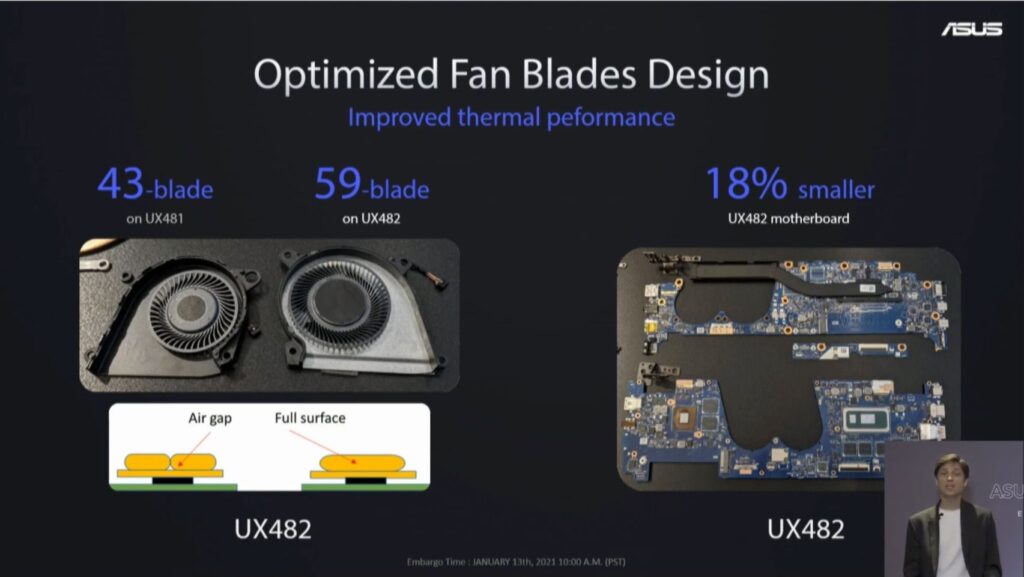 They have also improved the thermal performance of the fans with more blades – from 43 blades on the UX481 to 59 blades to UX482. They have ditched the dual heat pipe for just one. 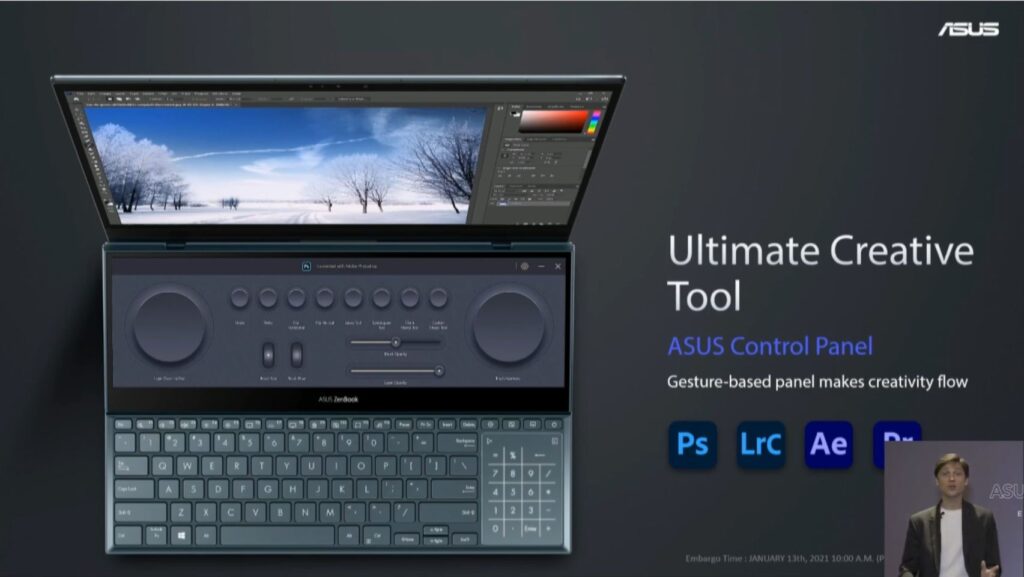 ScreenPad Plus gets an update with ScreenXpert 2 and you can take advantage of the software and tools to make it whatever you like it – even turning into a huge trackpad. Finally, they have teamed up with some software developers to create a Control Panel that allows creators to create quick tools on the Gesture-based panel for better creativity in apps such as the Adobe Suites. 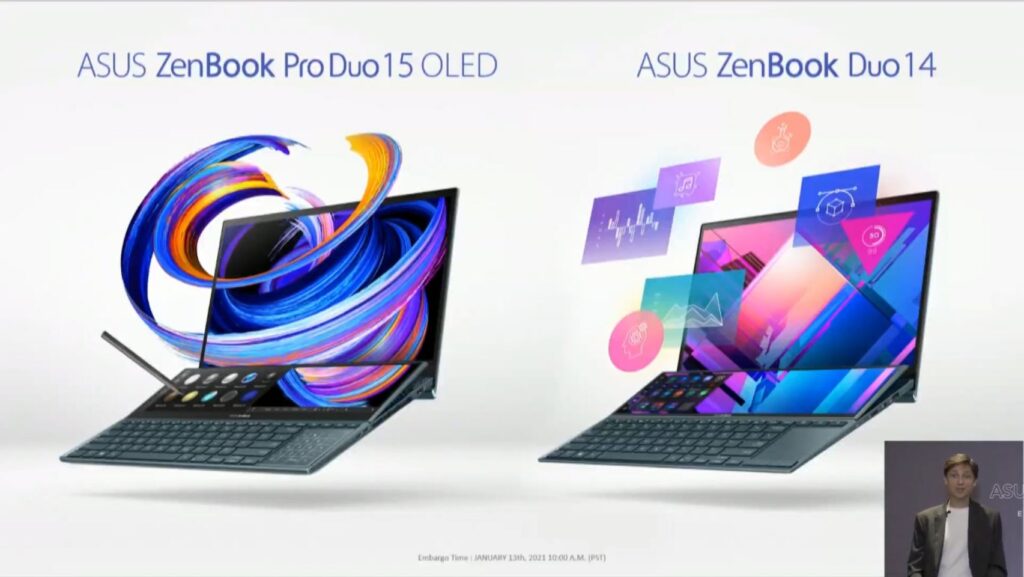 In terms of specification, the ZenBook Duo 14 comes with the U Series Intel Processors whereas the Pro Duo 15 rocks the H Series Intel Processors under the hood. The Pro Duo 15 can go as far as having a Core i9 Processor, the latest NVIDIA 30 Series Mobile GPU, RAM up to 32GB DDR4 and PCIe x4 SSD up to a terabyte. As for ports, it has sufficient IO for you to work with and you don’t have to worry about using or carrying a dongle. The Duo 14 features the 11th Gen Processor up to an i7 and a GPU Option between NVIDIA’s MX450 or Intel Iris Xe respectively. You can look at the rest of the specification below: 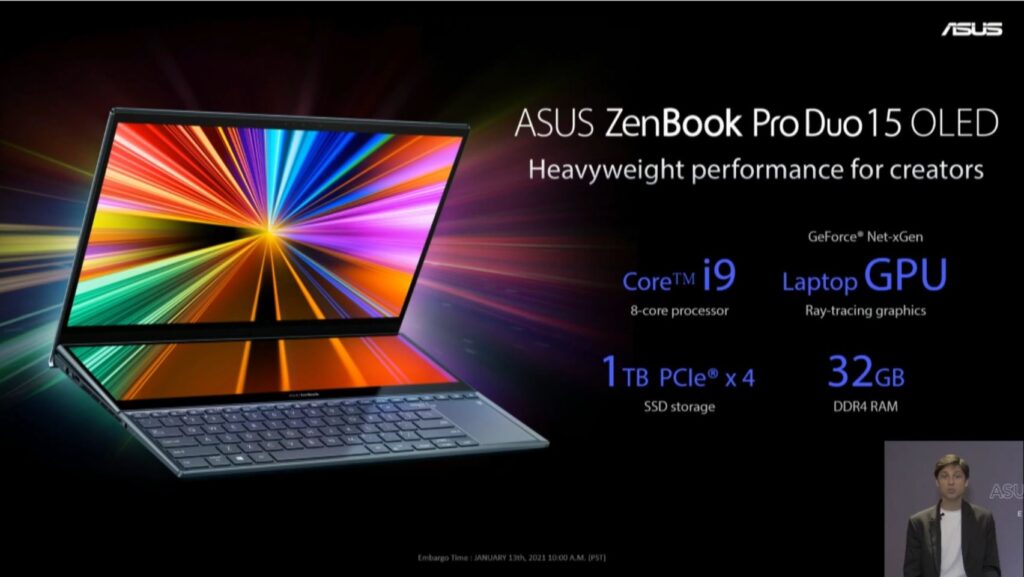 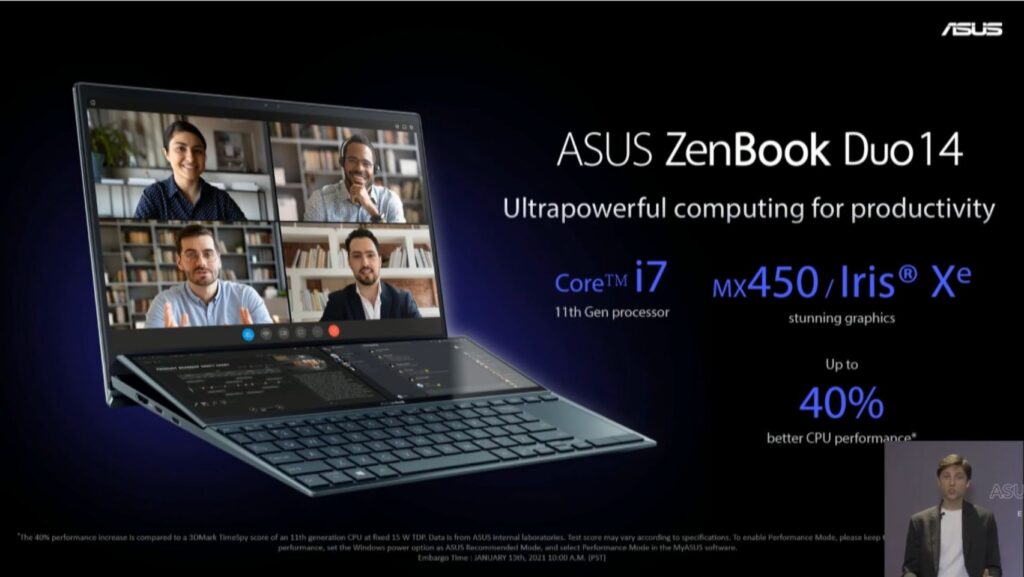 CES 2021: ASUS TUF DASH F15 is the Intel Version of the ROG G14 without the Anime Matrix