Asus ZenBook Lineup consist of multiple variants of laptop catered towards different consumers who want something specific in their laptop. They have a 2-in-1 laptop which touts the Flip naming in it. In the past we have not checked out some of their Flip based laptop but it’s exactly what it is – a foldable 2-in-1 laptop but this time around ASUS upped the game with a better display and some needed change to the laptop – so here’s the ASUS ZenBook Flip S OLED UX371 Review.

Despite the ZenBook name, the Flip S is a 2-in-1 laptop and certain changes needs to be made to accommodate that form factor. That said – the laptop has very notable changes in the design from the fit and finish and to the practical engineering. The Flip S is actually thinner than the normal Zenbook and this too gets the no-headphone-jack treatment in the whole Zenbook lineup which honestly is kind of a bummer given that in its tent mode, one could use it to consume videos and shows and lacks a headphone jack. But there is a “you-win-some-you-lose-some” thing going on which I will talk later. The whole laptop is constructed in metal giving it the premium looks it deserves through and through. Not to forget the colorway ASUS chose for this Flip S is stunning – that bronze finish that looks pretty understate and still stand out in the crowd is a nice choice. 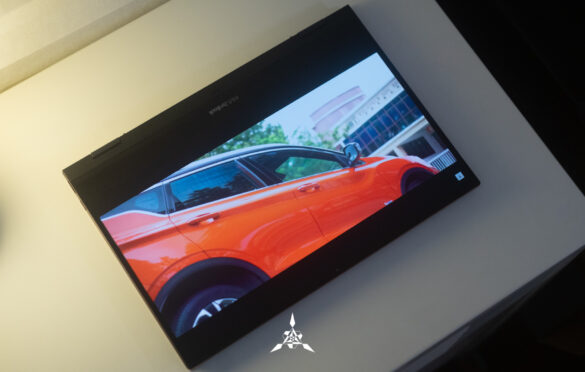 In terms of the feel, the laptop has a rather matte-like finish everywhere except for the Spiral finish on the display which is a signature design to the whole Zenbook design. The hinge is key here and personally I wished Asus went for a different hinge technology although given that in the past they have used the same hinge and it has not failed them in anyway. There is a slight wobble as you type on the keyboard when you use it in Laptop mode. Which is why I said ASUS could have engineered a better hinge, honestly. But folding it into a tablet mode or using it in the tent mode, there isn’t much issue and works well.

Sure, performance is the main change in the laptop but there is a much bigger change to the laptop and that’s the display. In the past, ASUS has been shifting to OLED to certain part of its laptop like the Zenbook Pro Duo, ExpertBook and so on – the ZenBook Flip S is the new one to get that treatment right now. It uses a 13” 4K OLED Panel and it’s also a touch screen panel with 4096 pressure level support and supports pen tip force of 10-300 grams respectively. They have also managed to keep the webcam at the conventional place – right on top and unlike the other Zenbook with shaved off bezels, the Zenbook Flip has a considerable amount of thick bezels all around with a much thicker chin which also touts the ASUS ZenBook branding.

I have a lot to talk about the Display more than anything in this laptop because ASUS took some interesting steps to avoid certain issues and also give the best experience you can get on an OLED Panel. One thing OLED displays are good at – well few things they are good at are: producing best in class colors and all possible with their calibration and it’s certified by Pantone, the True Black giving the exact color of how Black should be, super good vibrances and clearer image thanks to its dense Pixels per inch. There is that Blue light thing but personally I have my personal take on that which we will talk about it in a whole another content.

The display does everything you say above and in fact, one of my main complaints in the past with 2-in-1 is how inferior displays were chosen for such laptops given that it has the most potential packed under the hood and the higher pixel count will help users to take advantage of the display in any kind of mode. I am glad and happy to say this – the Display on the Zenbook Flip S is the crème de la crème of displays in 2-in-1 convertible laptops.

The Display on the Zenbook Flip S is the crème de la crème of displays in 2-in-1 convertible laptops.

Put it in any kind of form and you will enjoy using it. The fact that ASUS includes a pen inside the laptop for you take complete advantage is a win in my books as you don’t have to shell out extra money for the pen and get things done. During my time using it, given that we are still more or less stuck at home, I used the display to fill some applications, sign documents and I did it all with the help of the ZenBook Flip S. Windows experience when it comes to touch and pen interaction really needs a lot of improvement because Microsoft seems to mess things up and I don’t like it but in applications like Microsoft Office or Adobe Acrobat for that matter, the pen seems to work well and has no issues. This is more of a Microsoft issue than ASUS really.

One biggest issue with OLED panel is Burn-in – an inevitable issue no matter what because OLED is much prone to that – when we reviewed the older Dell XPS, we faced that, so we were hesitant in recommending it. But ASUS on the other hand, took the simplest feature that has existed for decade and incorporated it into their laptop under the name “ASUS OLED Care” – which is essentially a screen saver that enables in order to avoid that burn in. This is genius. Little things matter, and its things like this that wins our heart.

Now on to the performance, honestly what you get here is pretty much the same as the other Zenbook with the same Intel Evo Certified Processors and so on. Here are the specifications of this laptop below:

The benchmark scores of this laptop pretty much fell into the same spectrum as the Zenbook with the 11th Generation processor we reviewed last year – so expect the same scores under the hood. That said, to keep it simple and straight forward, you can checkout the table below for the scores. If you are wondering what kind of tasks this machine can handle – well here’s goes. The specification seen above is catered more toward productivity and light editing tasks. Obviously, users who is looking for some light editing and creation through drawing application would find the 2-in-1 form factor delightful and that said, the Iris Xe is a good Integrated GPU users can rely on and in fact in the last review, we said that the laptop even has the potential to game on, even if its in low settings. But do remember, since it’s a thin and light laptop – the thermals will most definitely shoot up. 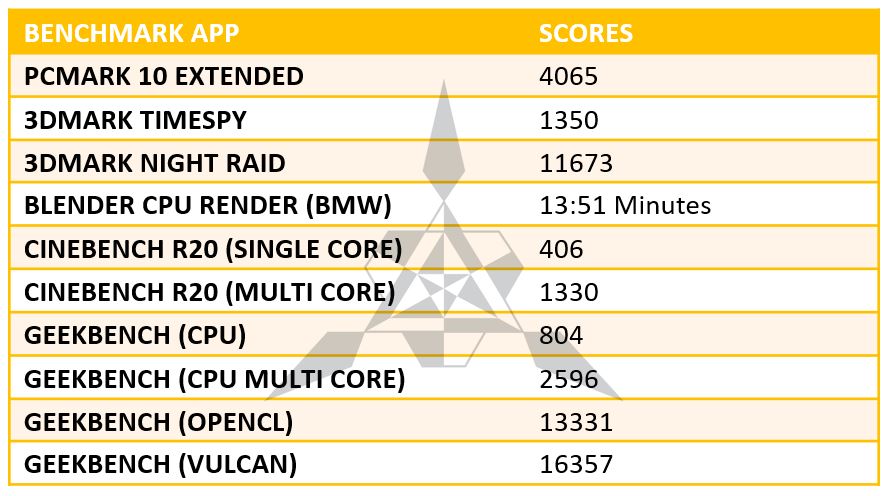 If the performance the laptop offers is inadequate, thanks to the Thunderbolt support, you could take advantage of an eGPU and get more work done. Although you wouldn’t get desktop grade performance and notice the bottle necking, remember, the performance is still going to be better than nothing.

If you are familiar with the keyboard layout on the Zenbook, you will get used to this one immediately but there are some subtle changes. Unlike the normal Zenbook which has a much square-ish key, the Flip S has a rectangular key, so adapting to this can be a bit of a challenge at start but once you do get used to it, its easier to use. The keys are positioned alright with a huge control key on the right and some special function keys placed on the very right in a vertical order. The arrow keys are small but useable. I do wish that ASUS took the extra space on the top and made some keys slightly bigger. It comes with a backlight, making it nice to use under low light or in a dark room. This Chiclet style keyboard is an acquired taste as they do have some mushy feel to it rather than sounding clicky.

The trackpad on the other hand is exactly the same as the Zenbook as it comes in this glass covered surface with the Numpad under the trackpad. It’s a much wider trackpad and the palm rejection is fantastic. When I do type, my right palm covers part of the trackpad and during typing this whole review I had zero issues.

The speakers on the Zenbook Flip S are positioned on the front instead of the side, giving it a nicer sound staging. ASUS has never disappointed on the speaker department and the “Sound by Harman Kardon” label printed on to the body does carry some weight to how it sounds and I have no regrets. Just that when you used it in Tent or Display mode, you feel like the sound isn’t too direct and that’s because since the bottom is curved and the place where the speaker is located is directed towards the surface, it may seem like it sounds a little echoey. Something to keep note of. 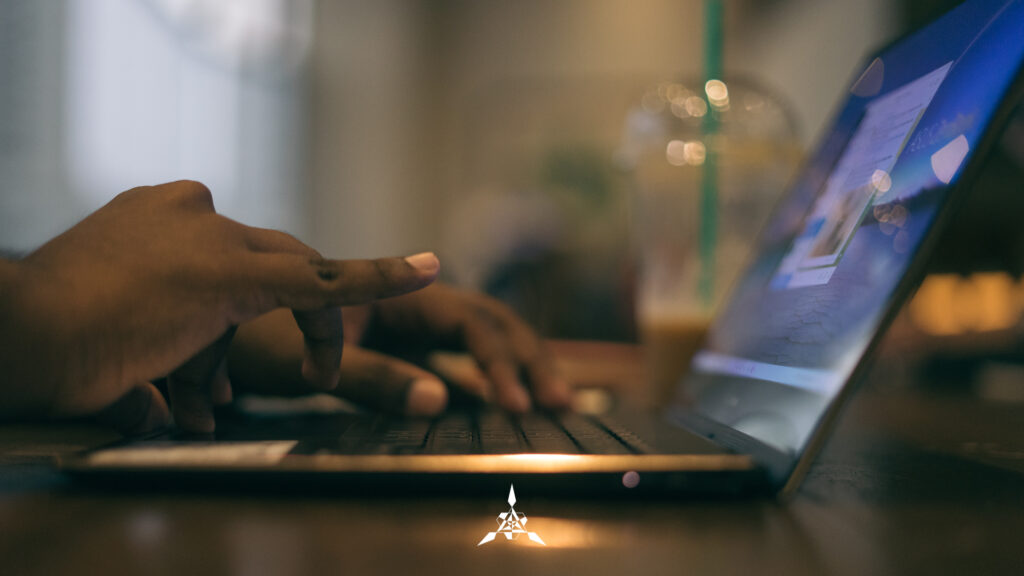 The Flip S features a 67-watt battery that claims to give about 10 hours of battery life and during our test, it lasted about 7-8 hours in our PCMARK Battery benchmark which is decent. The thing about this laptop is that it incorporates the USB-C Charging, so you can get like 60% of battery roughly in 40+ minutes all possible to its fast-charging capability. So, there isn’t much to worry about.

The thing is that – when it comes to conventional laptop that features touch screen and pen support, it’s kind of is a little weird to use due to its lack of 2-in-1 form and the experience isn’t pleasant. The Zenbook Flip S takes advantage of its 2-in-1 form factor and the added support for a pen sweetens the deal for users. But that isn’t the best part about the laptop. To me, it’s going to be the display that outshines any 2-in-1 laptop in this price bracket because it has that one key element a convertible laptop must have: Easy usability in any form either on the go or when stuck to a table.

Special thanks to ASUS Malaysia for gracing us with the Zenbook Flip S UX371 for making this review happen.