Acer has good strength in making powerful and light laptops, but until the last generation – their design has been dated. The Swift laptops, in general, have been a nice go-to for those who want a very productivity-centric laptop but keep things light. This time around, Acer went – you know what – we can keep it light but make it different. And so, they did. Meet the Acer Swift 5 2022. Read this review to see what has really changed. 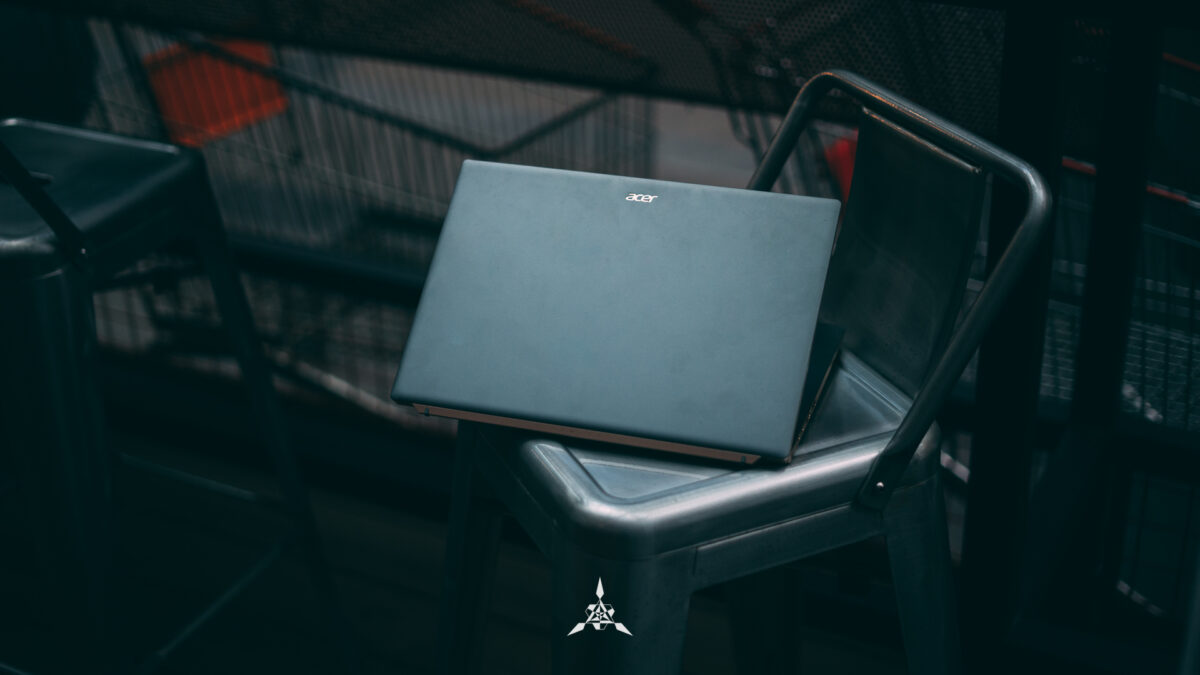 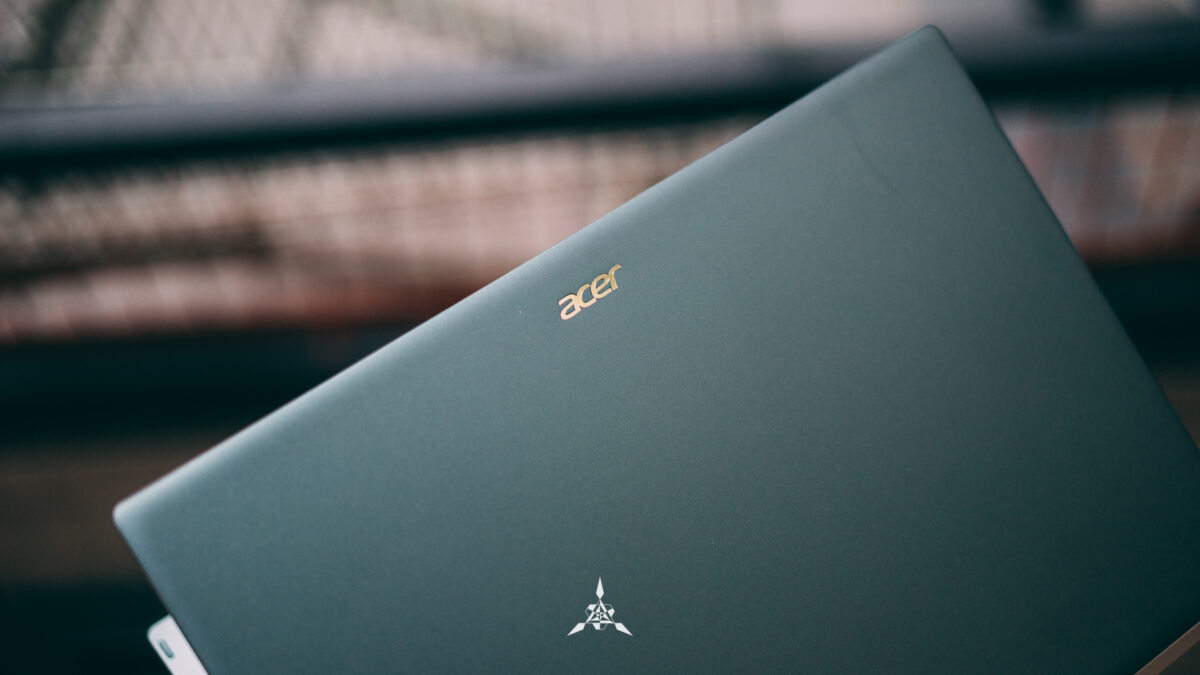 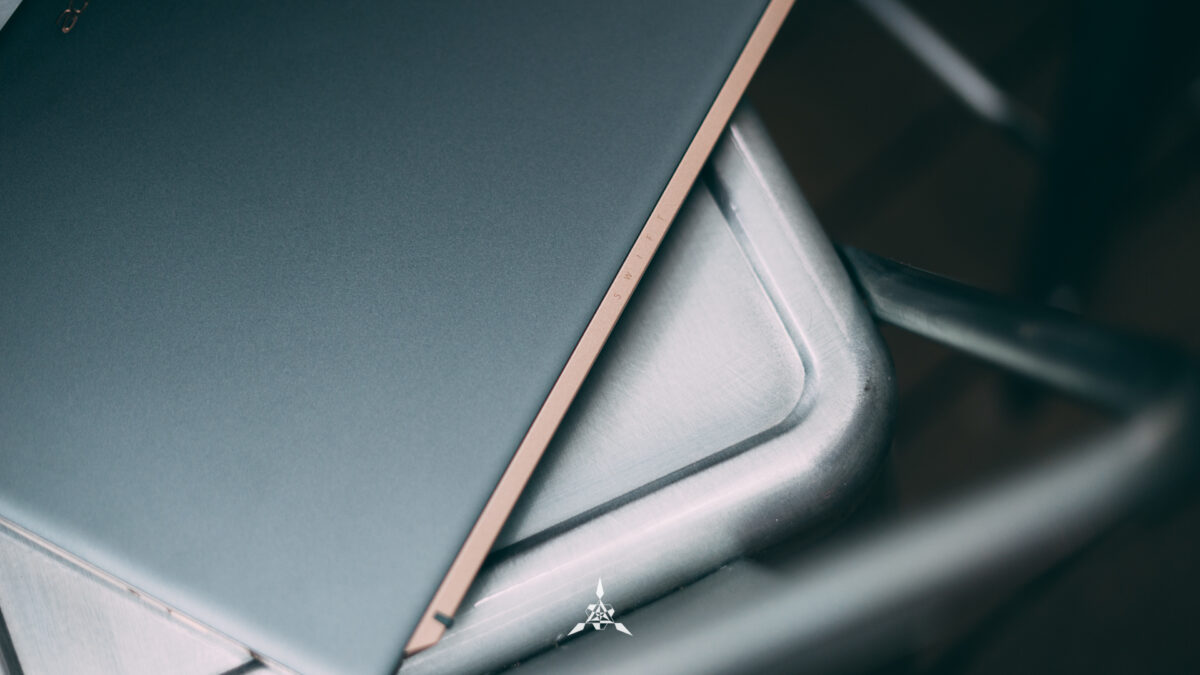 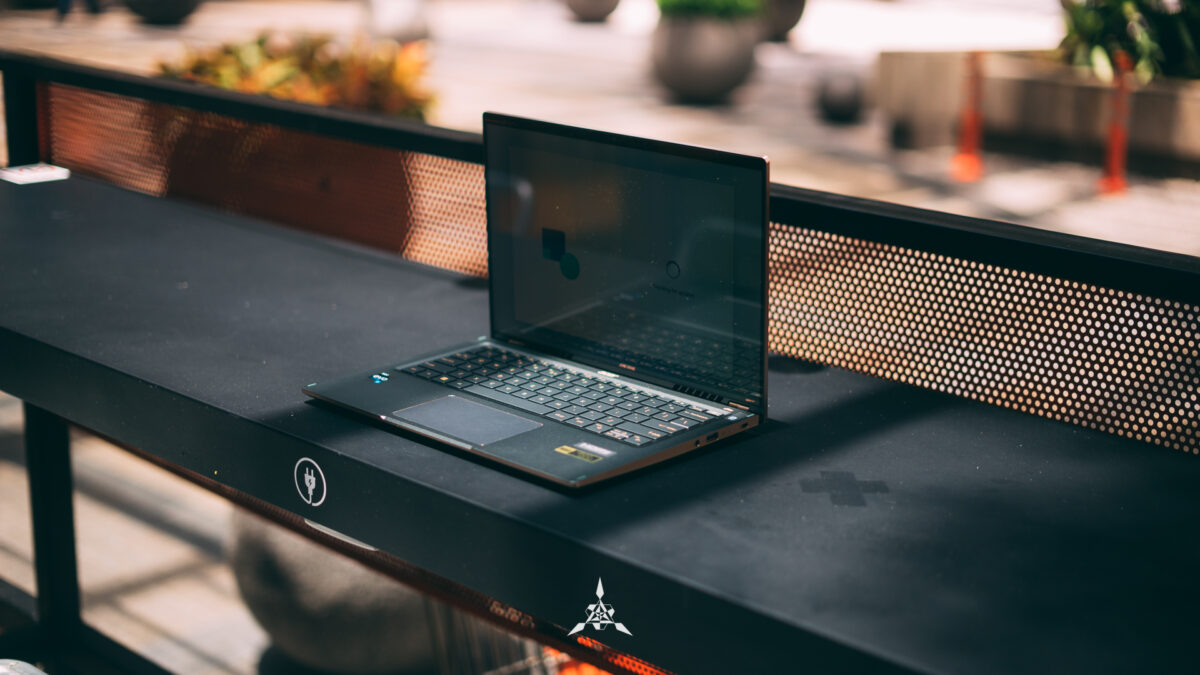 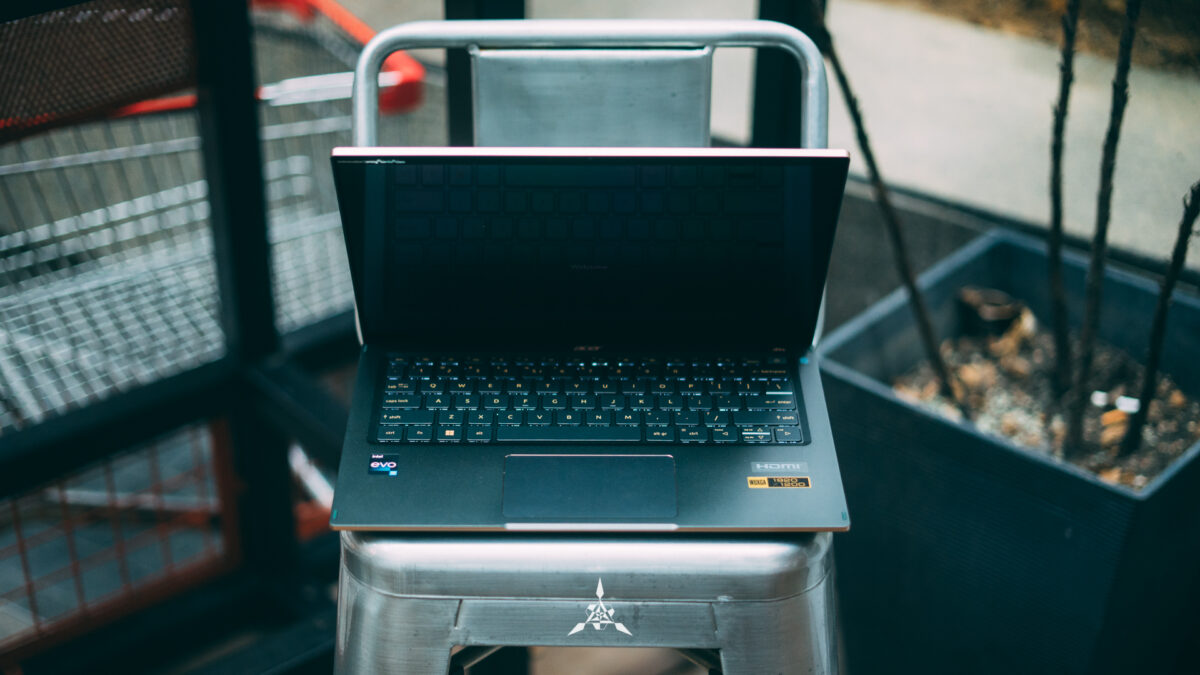 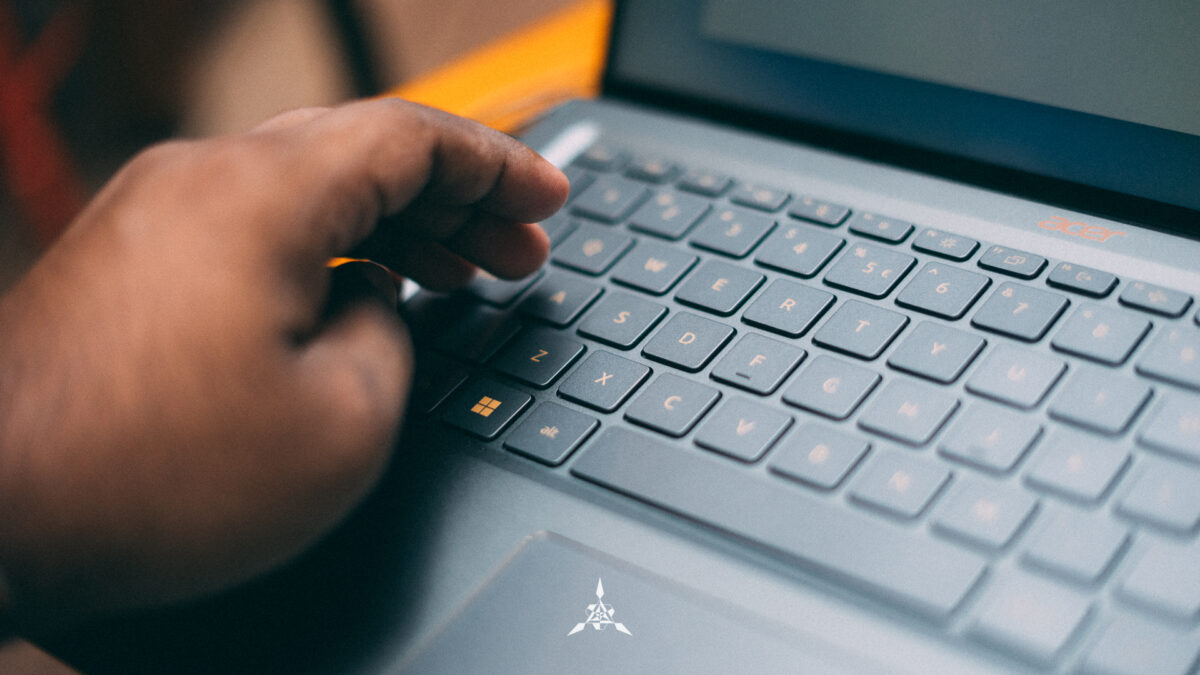 Acer finally left its comfort zone to try something different, and new but still retain a little bit of that “Acer-ness” in its design and DNA. Acer Swift 5 2022 gets a new look, in fact, one that looks pretty stunning near and from afar. The Moss Green-slash-grey colour makes the laptop look a whole lot more elegant and the subtle “Acer” logo on top and the “swift” printing at the bottom is nice. On the side of the laptop, it gets a dazzle of gold colour finish – Acer specifically calls it the 2nd Anodic Luxury Gold treatment. Essentially what that means is: they have anodized the sides twice to give that depth in its design and feel. 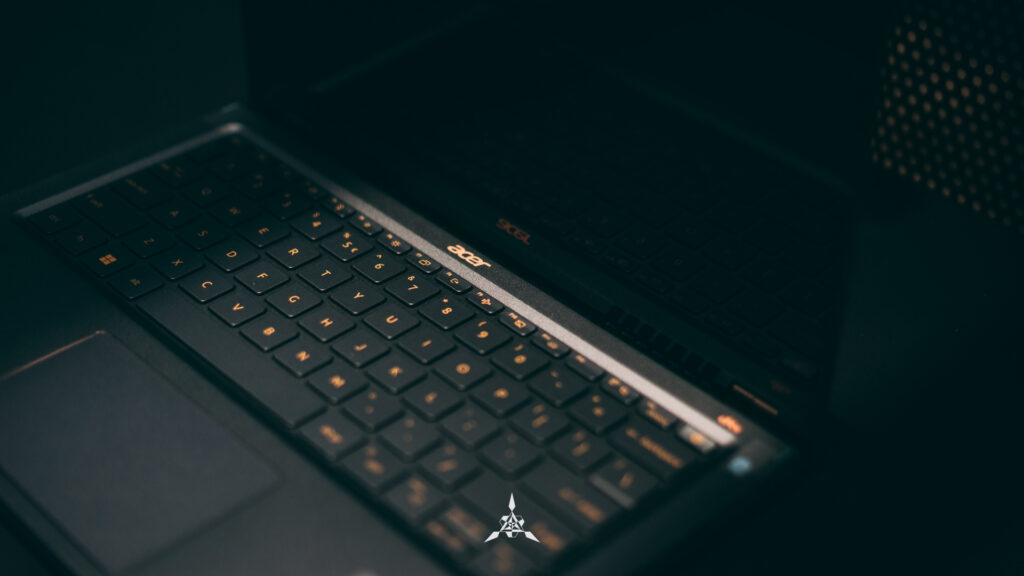 The new Acer Swift 5 (2022) is constructed entirely by aerospace-grade aluminium chassis – so, the durability of the laptop is up there. Unfortunately, there isn’t any MIL Standard certification to back the durability in tough conditions. This is where you get their Enduro series which is meant to withstand some serious conditions where normal laptops don’t stand a chance. But so far, this look and finish on the Swift 5 is absolutely a welcoming change that had to happen. If not, the Swift 5 would have lost its excitement or appeal. 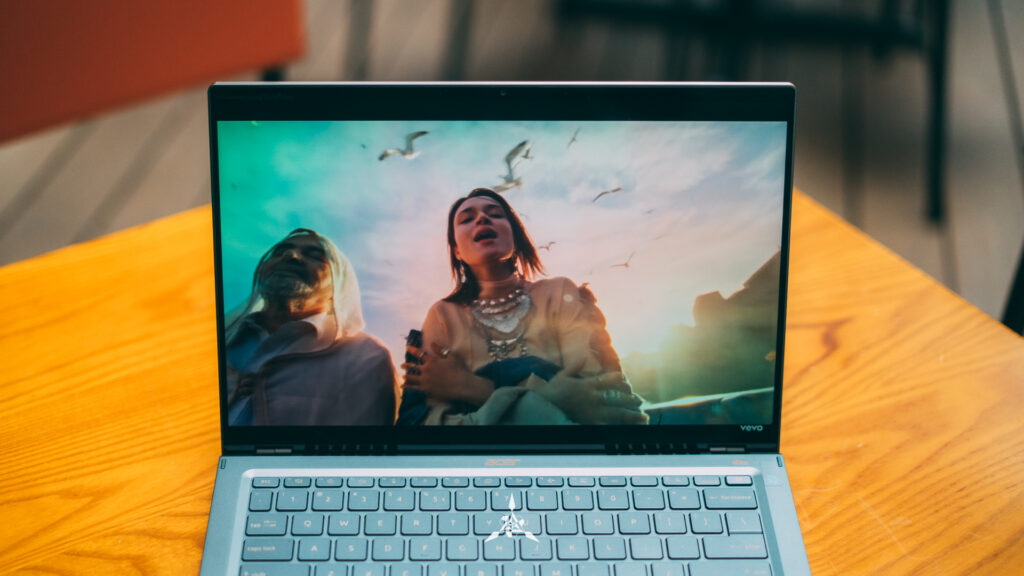 Acer Swift 5 2022’s 14” IPS Display with a resolution of 2560X1600 – tapping into the WQXGA realm is a delight to look at. They have once again gone for LED backlit-based LCD display, and I wished that the Swift 5 got an OLED treatment instead because it’s about time that happened. But the laptop shines with its display and since it’s touch-enabled, it’s fun to use when you need the quick touch action rather than moving or dragging the cursor around. The display is also in a 16:10 aspect ratio, giving you more vertical real estate.

Interestingly, the laptop features not just any kind of Corning Gorilla Glass, but an antimicrobial kind. It does sound nice, but we have not seen proper whitepaper backing as to how well the glass kills microbes on screen. We will debunk this some other day. In case you’d like to know what kind of glass it is, it’s an alkali-aluminosilicate thin sheet glass formulated with an antimicrobial agent. 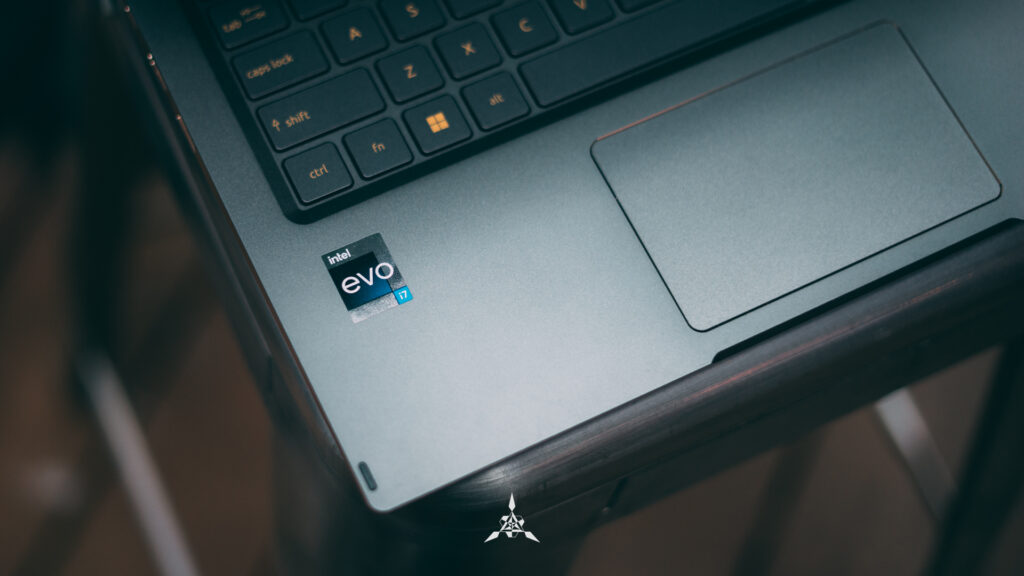 In terms of specification, the 12th generation Intel reigns the territory with its powerful offering and Acer has gone all in with the next generation option for it:

Now you can see that Acer has not taken a step lower with the 1260P processor as it’s supposed to compete with the premium productivity laptop in this segment. So, you do get the next-generation DDR5 and Gen4 SSD experience. It’s as delicious as it can get. Obviously, since it is an Evo Certified processor, there are some things it does better than your normal Intel Core processor. We made an entire video about it which you can check out.  But here’s a TL;DR of the key features:

Jumping right into the benchmarks – you can see in Cinebench R23 – the P-Series with up to 12 cores and a 16-thread processor is ripping it through and hits scores of 1685 points in single-core and 8768 points in the multi-core situation. If you were to compare it with the 11th generation processor, like the 1165G7 – although a different laptop – it scored around 6000+ points in multicore whereas the single core performance was at 1498 points. 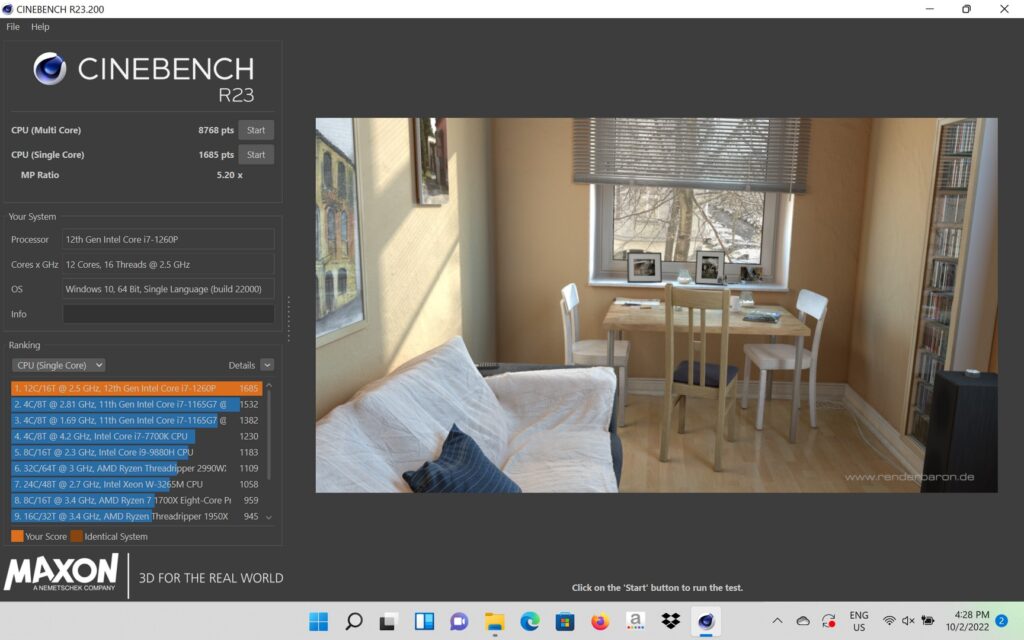 You can check out other benchmarks below. 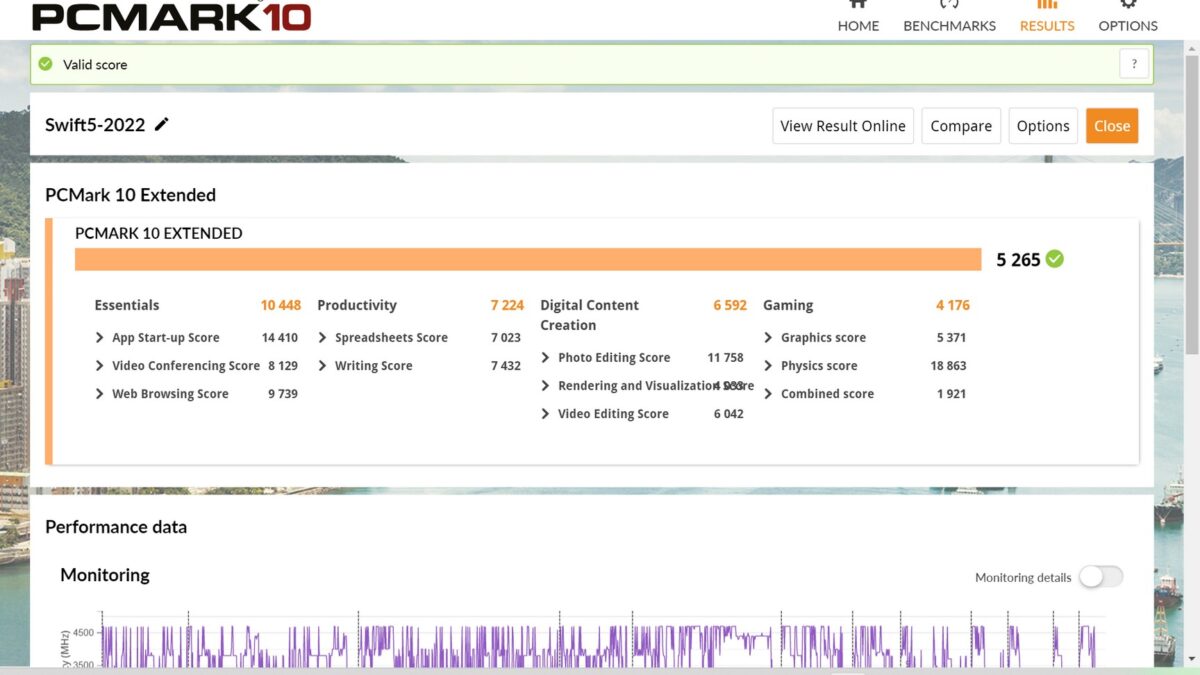 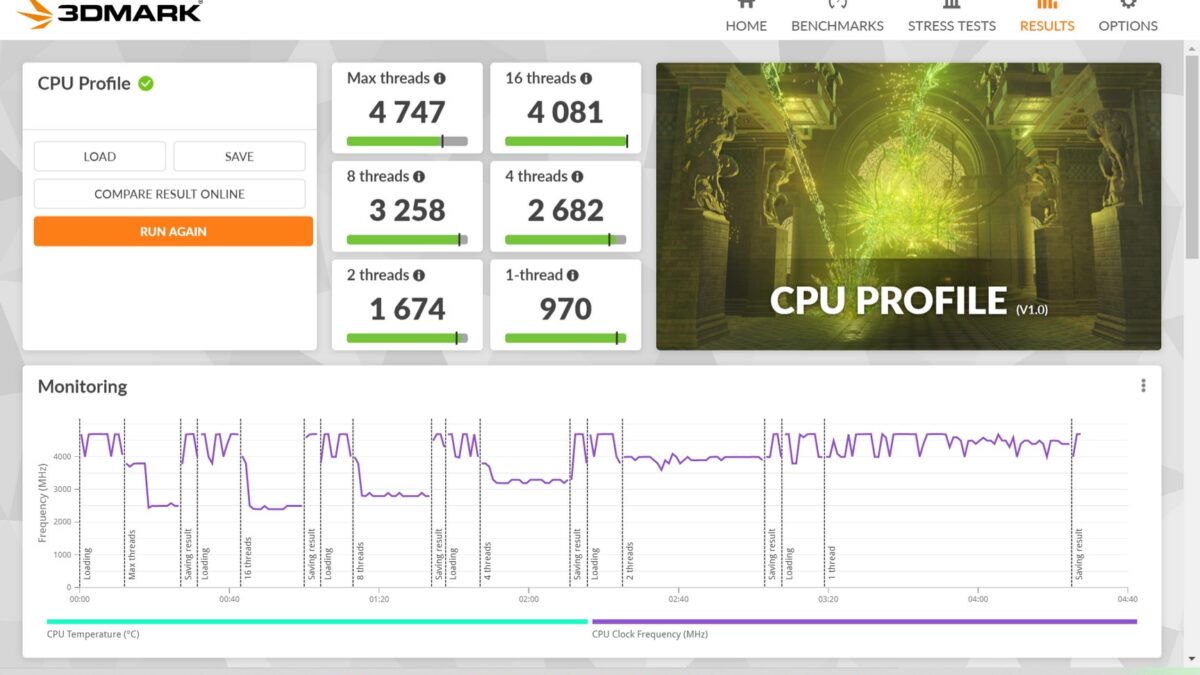 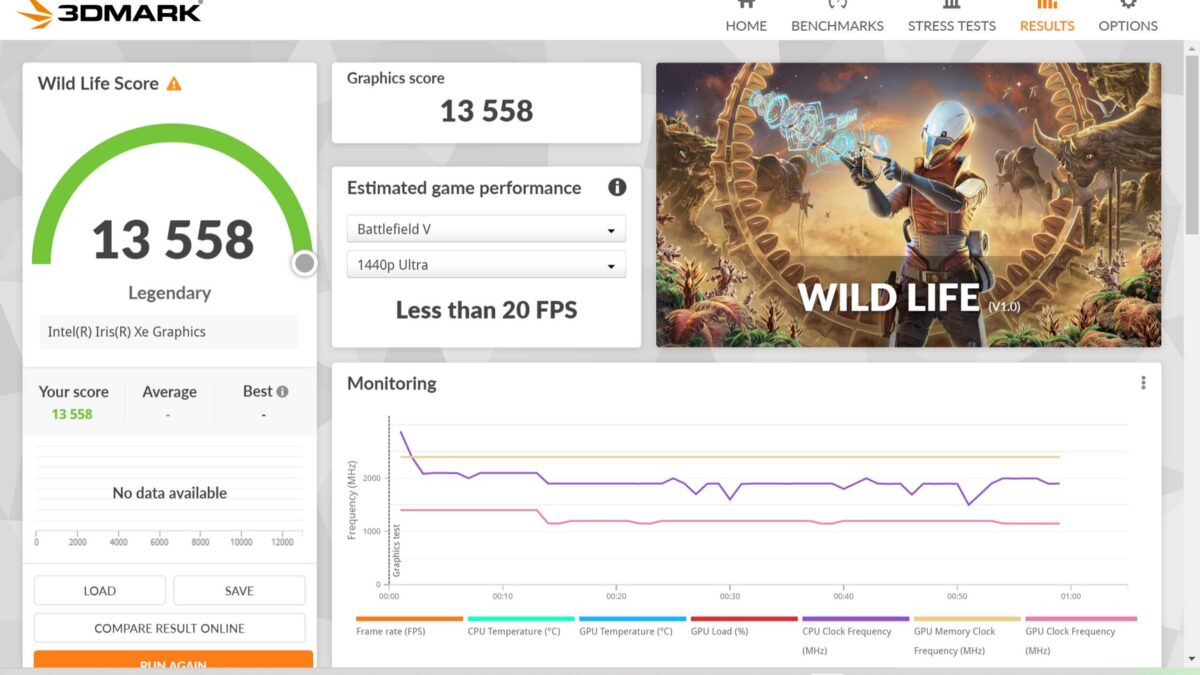 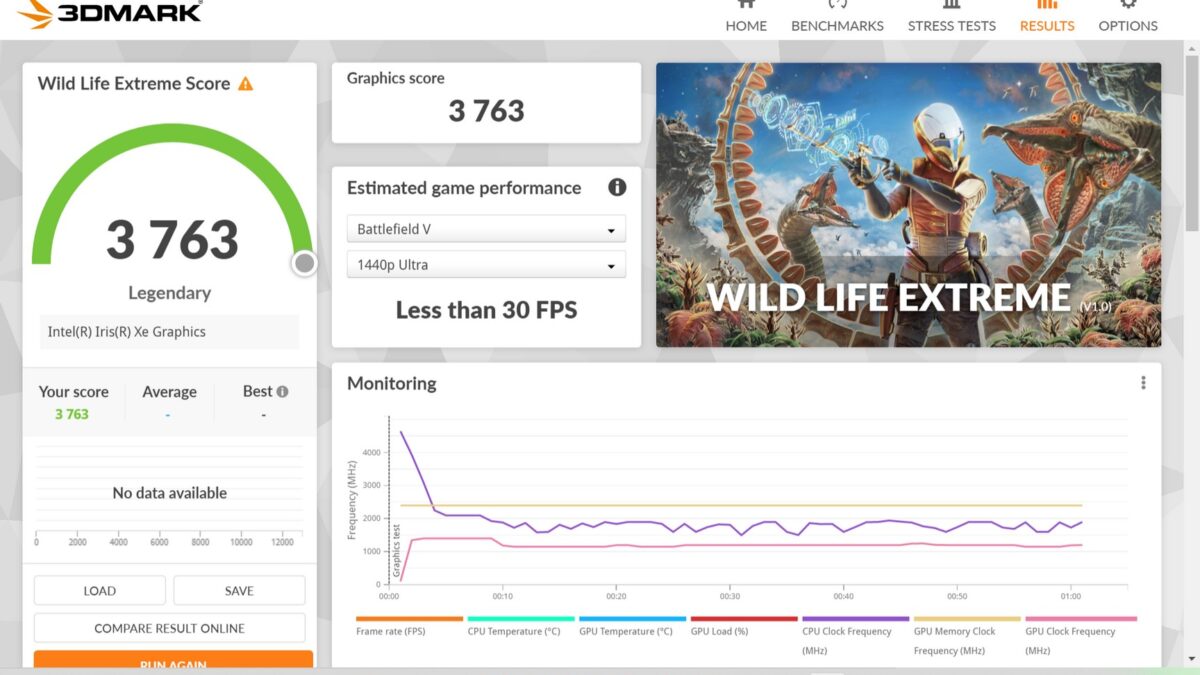 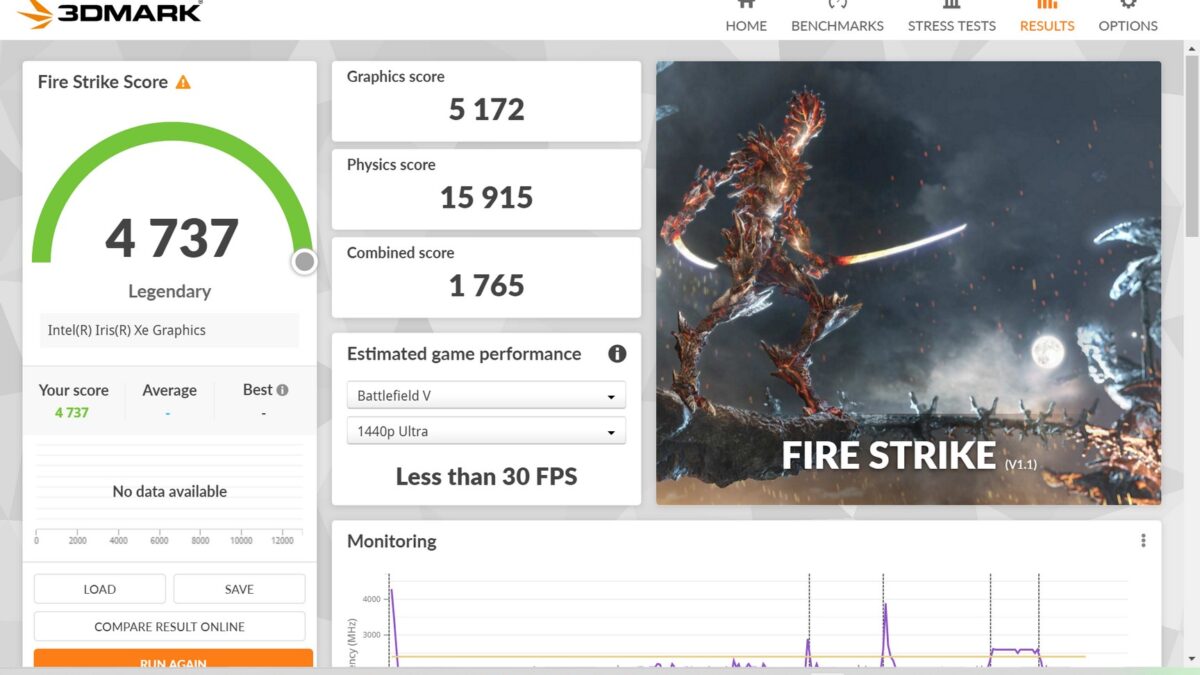 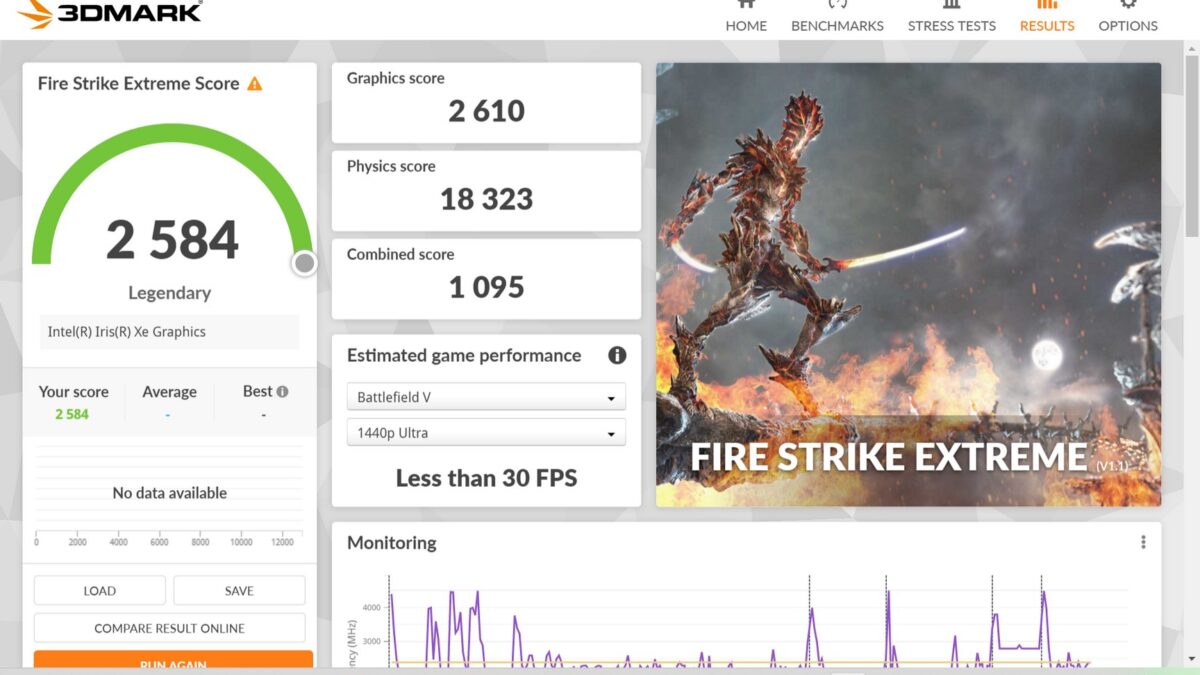 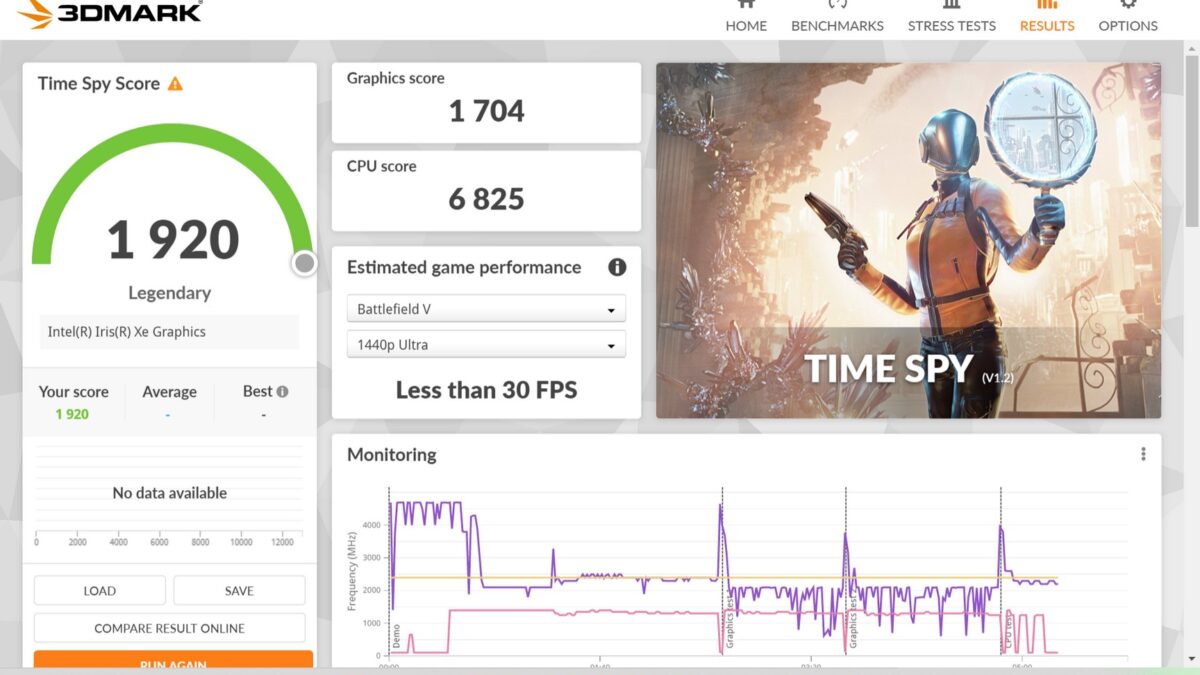 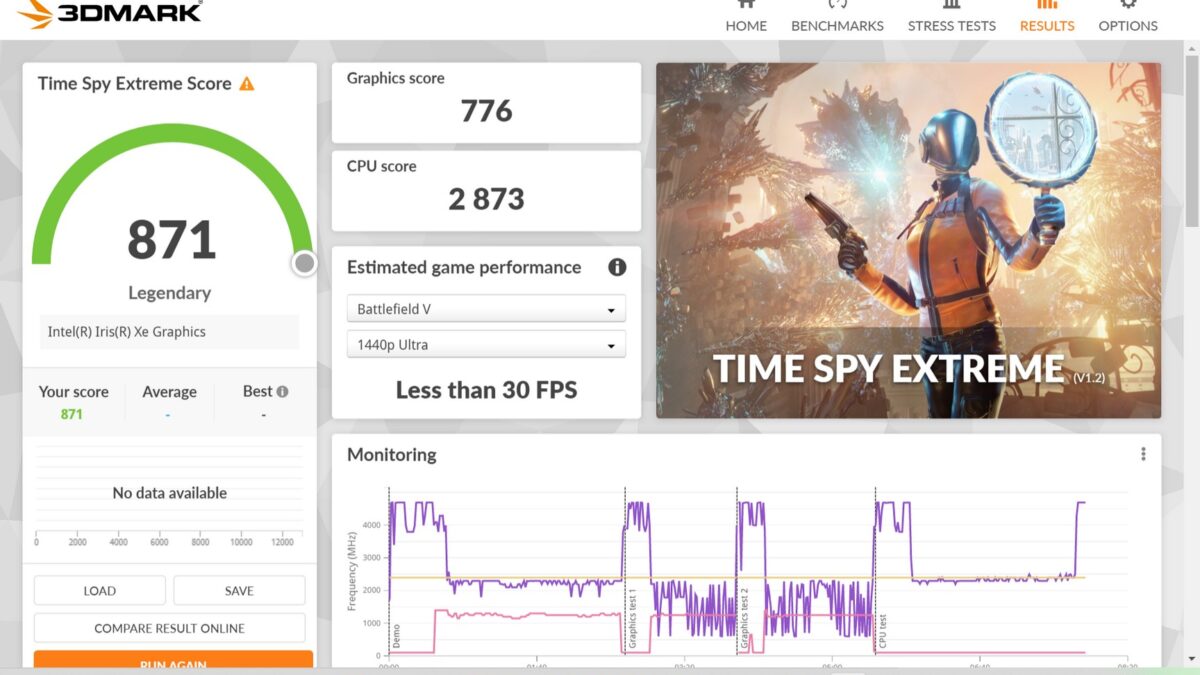 As for the thermals, this processor does hit the max cap of 90+ degrees Celsius when the situation gets tough. But the laptop immediately kicks a failsafe of sorts and pairs with their TwinAir thermal solution – it keeps the temperature at a range of 71 to 78 degrees. In a way, you could say that the thermals are handled as okay as the laptop could, but I wish it could be lower because we have seen it before.

In terms of connectivity, Intel’s Killer Wireless Wi-Fi 6E 1675i is here to grace you with stable connectivity. As for the ports, the laptop gives users access to the following: 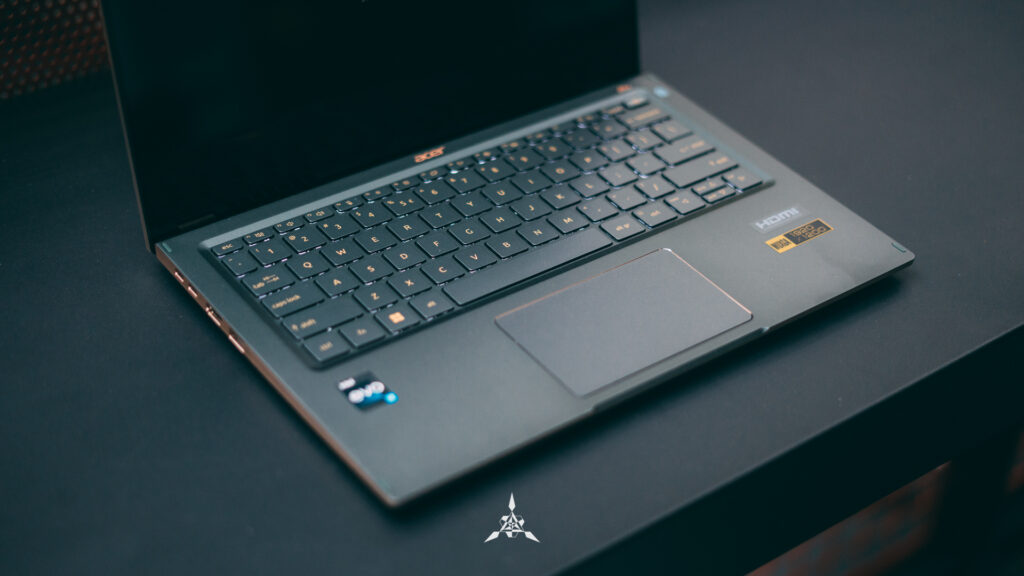 Acer Swift 5 2022 has a new chiclet-style keyboard with a new choice of font – and in my opinion, it looks a lot more mature. The arrow keys are a bit constricted but otherwise, the keyboard is nice to type – it has a short key travel which can take a while to get used to. When you are in the dark, you can use it with the backlight. What I do like about the keyboard is that it incorporates a fingerprint sensor very well within the power button.

The trackpad, which could have been bigger is covered in a Moisture resistant coating and it’s made out of OceanGlass – basically, Acer has recycled materials that are being used for this. So far, the Windows Precision drivers, are a delight to use but for us, the left and right clicks seem a bit too sensitive. But that’s just us nitpicking. 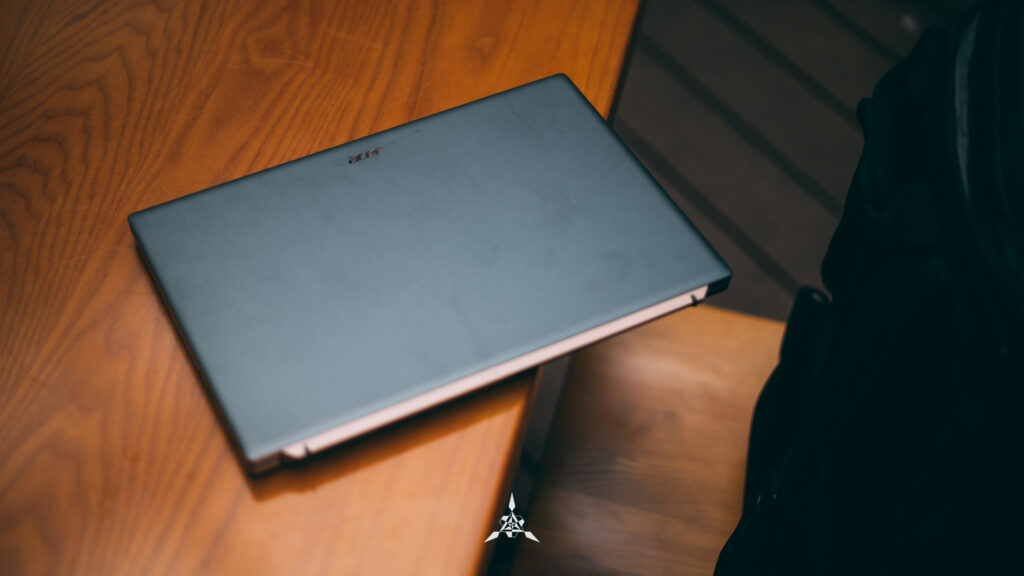 Given that the Acer Swift 5 2022 you see here has gotten a new design and touts a powerful next-generation specification, it sure does come at a price point. The model we reviewed here comes at a whopping RM 6,599. But there are options in the lineup where it goes as low as RM 4,299 with different specifications. The i5 has a good value proposition but the display is capped at 1080p – but if it isn’t a big deal, go for it.

But I have to say, Acer sure did the right thing to phase out a dated design for a new one. Trust us, it makes a whole lot of difference.