Acer Swift 3 Ryzen 5 4500U Review: If the Budget is Tight, This Laptop fits Right

Acer has been making these Swift series laptops for a while now and the last swift laptop we got to take a look at was the Swift 7 which we reviewed not too long ago – you can read that review here. That said, a while back, the brand announced their AMD variant of the Swift 3 which features the all new Ryzen 4000 Series processor. Now that we have used it for a long while, here’s our final verdict on the Acer Swift 3 Ryzen 5 4500U Laptop. 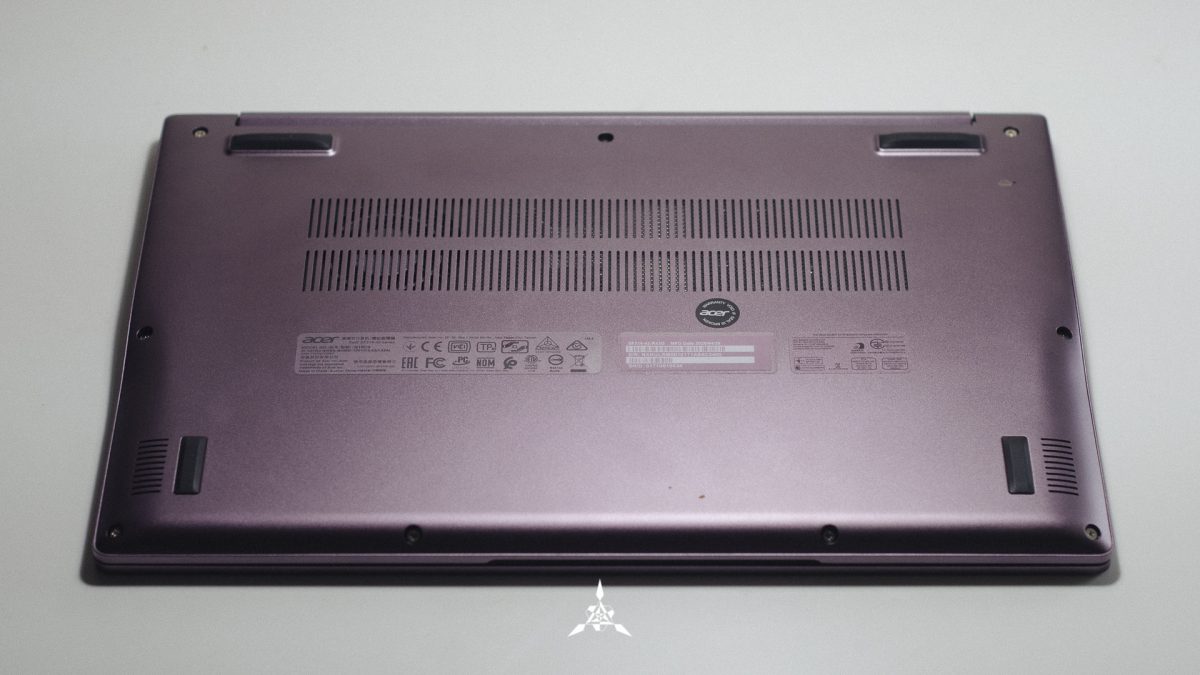 Unlike the Intel Variant of the Swift laptop which got quite the major change in the design aspect to make it a lot sleek and quite the looker, the Swift 3 with the AMD specification has a rather different design – in fact, it has the older Swift design with the title of the laptop on the hinge and the laptop also has the same build quality. It’s not a bad thing that the design is something we have seen before but I do wish that it did get a little bit of refreshed look, as it would make consumer enjoy the new design – but users can pick from three different colors, including Mauve Purple – which is the color of the unit we received. It does have a chic persona that would make any user love the color. 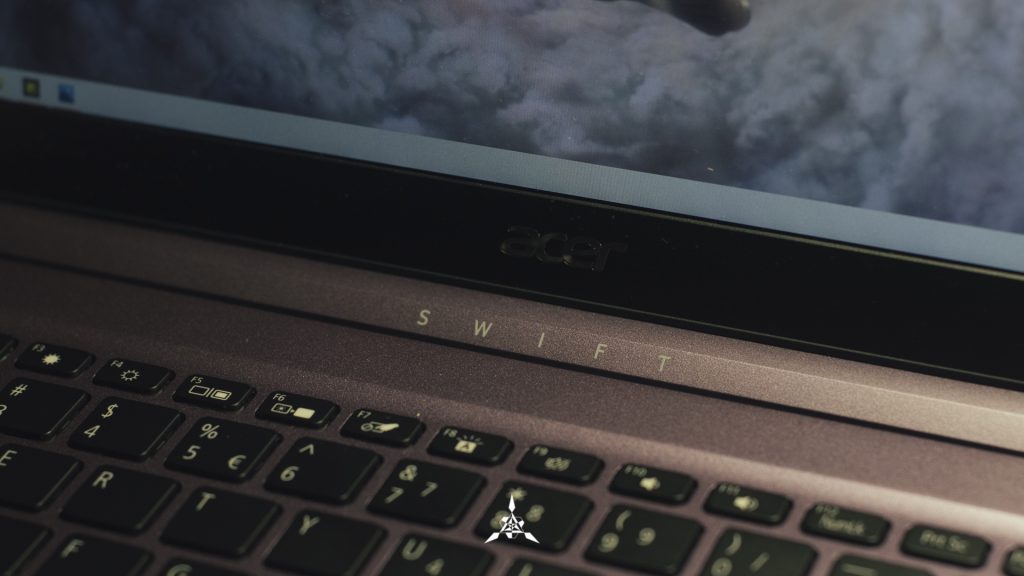 In terms of feel, the laptop is constructed in metal overall except for the bezels around the display which is constructed in poly carbonate. The bezels are indeed thin and does bring more screen real estate to it. That out of the way, the laptop has some nice build quality to it – keeping the premium-ish feel for the users to enjoy. Other than that, there is a little flex around the keyboard area under heavy pressure. The hinge on the Swift 3 is solid and it can do a complete 180-degree turn, which gives the opportunity for the device to go all flat. But if you are planning to that one finger lift, you won’t be able to get it right as the bottom of the laptop falls on the lighter side, so, you’d need to open with both your hands. It’s not a huge deal breaker but just something we wanted to say.

The Acer Swift 3 houses a 14” IPS FHD Panel with the capability to hit 300 nits brightness. The screen is in a 16:9 aspect ration and offers 72% NTSC color gamut – at least on paper. Say if you are planning to use the Swift 3 purely for productivity use and for school, university or even just for modern office work – the display is quite alright but for someone who has used great deal of displays on a laptop, the Swift 3 has a little dull and inaccurate colors which personally, I wouldn’t recommend using for work that requires color accuracy display – it has a warm tone to it. But given the specification, chances are customers who are planning to opt in for the Swift 3 won’t be using the laptop for such activity. I do wish that the display was a little brighter than 300 nits – because under brighter condition, the display can get a little challenging but otherwise, it performs fine – The general consensus will have very little issue with the display.

In terms of specification, the Acer Swift 3 gets the AMD treatment. That said, the specification are as follows:

AMD Ryzen 4000 Series processors in general is offering some impressive performance and the Swift 3 is no different. If you were to ask me, it’s exciting that consumer can own a 6-core processor to offer a good amount of performance in the productivity department. In our Cinebench R20 Benchmark, we noticed that the single core performance scored at 425 points and multicore performance at 1842 points. That is an impressive performance and we have an 10th Generation Intel Core i7 U Series laptop with us and in comparison, the difference isn’t by much. You can also checkout the blender score – where we ran the BMW Benchmark and the laptop was able to finish the test around 8 minutes.

Ryzen is putting up a good show which is nice. Intitially, we thought the Radeon Graphics that comes included with the 4000 Series were far off from what the Vega Graphics is. But a friend of ours (Thanks Vyn!) brought up that the Ryzen 4000 series APUs’ GPUs is indeed still based on Vega architecture. It’s just that AMD decided to change the name for it for avoiding confusion among general consensus. Thing with that is – the new generation has less cores but still faster overall, all made possible to the increase in frequency. You can launch older titles like DMC: Definitive Edition but other than that, AAA titles or newer games might be a little challenging to play with. I do wish that the RAM was upgradable from the 8GB RAM. You can see our 3DMARK benchmark scores for the laptop to give you an idea on how it is.

As for the storage, CrystalDiskMark shows the speeds of the SSD is relatively fast – coming in at 2191MB/s for Sequential Read Speeds and 1052MB/s for Sequential Writes. Loading and launching applications, documents will be super-fast and that NVMe SSD is a good inclusion. The thermals on the laptop is really cool and the thermals didn’t go way past 66 Degrees for the CPU and 60 for GPU, making this laptop relatively cooler than the Intel counterpart. Even when it hits almost 70-degree mark, you won’t feel the heat on your palm rest or even the keyboard. It’s more prominent on the top part, closer to the hinge.

Finally, for I/O. The laptop comes with sufficient amount of ports to get through the day. On one side, you have: DC IN, USB-C with Fast Charging Support, HDMI, USB-A and on the other side, you have another USB-A, 3.5mm Combo port and the Kensington Lock.

The Swift 3 comes with a 48Wh 3-cell Lithium-ion battery with a capacity of 4200mAh respectively. Acer claims that the laptop offers about 11 hours of battery life and during our test which involves Spotify streaming, a little bit of netflixing and more productivity task, we got about 7 hours battery and in our Modern PC Benchmark with PC MARK10, we got a score of a minute close to 8 hours of battery life. While it may not be as close to what Acer claims it to last for, the 8 hours battery life is still better than a lot of other small form factor laptop which offers less battery life – but this was also possible thanks to the lower power consumption of the Ryzen 5 processor.

You can charge the laptop with the DC IN port, but Acer added another option for you to charge the laptop, its via the USB-C. So, you can pickup a 65W Adapter like the UGREEN ones which we reviewed and a USB-C to C cable while you are at it and bring this with you everywhere you go. Very impressive.

Finally, we get to the Keyboard and Trackpad of the laptop. The Swift 3 has one of the nicest chiclet style keyboard I’ve ever used in a while. The key travel is just nice enough for you to type your document or anything on the move with no discomfort – in fact, we are typing the review with the Swift 3 keyboard. The keys are in the right size with a nice Enter and Longer Right Shift key. Only thing that might take a few minutes to get used to is the arrow keys, as it is a little small. Don’t worry, you can type in a dimlit or dark room with the Backlight on the keyboard.

The trackpad on the Swift 3 is responsive and thanks to Windows Precision drivers, the gesture works well and the trackpad in general has good response. The left and right click is placed below the trackpad, which works well too.

As for security, Acer has taken a step further by including a Fingerprint sensor for easy unlocking – personally, that’s a great touch.

Not all laptops are perfect and every single one of them comes with a little setback – the Acer Swift 3 does have one and it’s the display. But when you do look past that, the Swift 3 offers a great performance on the platter and poses a threat for team Blue – because it feels great to live in a time where a 6-core processor that offers a great performance with the capability to hit boost clock speeds of 4.0Ghz coupled with a good SSD, decent battery life and all that – for the price of RM2,599 – that right there, is a steal.

The Acer Swift 3 with AMD Ryzen is a great fit for Students and people who needs a laptop that excels in the productivity aspect – in fact, they even bundled the laptop with a complete Microsoft Office Home & Student 2019 license, which is just great. Even if you are looking for a laptop but your budget is tight, the Swift 3 fits just right.

Huge thanks to Acer Malaysia for sending the Swift 3 AMD Ryzen 5 Laptop for us to review and making this content happen.